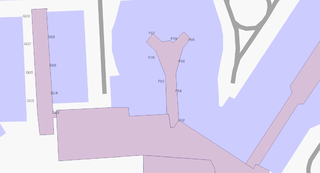 Example rendering made by Kosmos, zoom 17

Airports got often bizarre system to number their gates and most of the times it is hard to find a map of the airport on-line. They are easy to tag with Yahoo Imagery or even GPS when you stand by the window. For gates where you will have to go in to the bus first, the place in the terminal where you will have to wait for the bus should be tagged.

Just plain text though maybe in a square at zoom 17 and 18 (Mapnik). See also see the render I made of Schiphol.

This proposal has been Approved