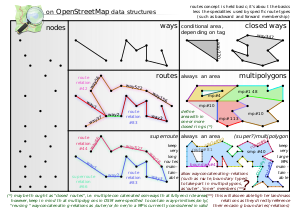 Minimal approach, without mandating a change to current OSM API and building on established principles. Note that this approach is different to super areas, but not as fragile as huge MPs are claimed to be.

OpenStreetMap does not have a native Area (or polygon) data primitive and areas are currently modeled using Ways which are also used to describe Polylines.

Not all closed polylines are areas, as this varies based on which other tags are present. A closed way tagged highway=pedestrian is considered to be a circular path unless it has a area=yes tag which turns it into a pedestrianised area, however a closed way tagged with leisure=park is assumed to be an area. Areas can also be described using multiple ways as members of a relation:multipolygon. It is possible within the editors to create parks which are not closed even though these won't normally render unless they are included in a multipolygon. Anyone wishing to tag areas or use areas therefore needs to always check on the default usage of closed ways.

This set of wiki pages describes the problems and confusions created by the current model and suggests some alternative proposed approaches to model areas more clearly, flexibly and simply.

Polygons can be created from closed ways (i.e. ways where the first and last node are the same). This is most often used for small polygons such as parks, buildings or small lakes.

What makes a closed way into a polygon are the tags used. If the tag refers to something that is an area (such as landuse=* or building=*), the way marks an area. If it refers to something that is a line (such as highway=* or railway=*), the way still is a line. So a roundabout might be described by a closed way, but that does not make it into an area. There is an extra tag (area=yes) to turn line features into area features, so a way with highway=pedestrian and area=yes describes a pedestrian area (such as a market place in a city).

Polygons modelled as closed ways can not have inner rings, i.e. they can have no holes. It is not possible to define multipolygons (with several outer rings) this way.

Polygons modelled with relations can have inner rings, i.e. they can have holes. They can also have multiple outer rings so they are proper multipolygons.

Data wise, the current API version is the main culprit for invalid multipolygon relations, because it allows broken ones to be uploaded. The API should try to assemble them according to the specification and reject a changeset in question if this cannot be done. Mass edits or automated edits are discouraged anyway, so in case these checks cascade a changeset could be rejected early, after a timeout, without waiting for the checks to finish.

Coastlines can be seen as the boundary between land polygons and sea polygons. But in OSM, they are handled in a different way. See Coastline and natural=coastline for details.

What makes this case special is that homogeneous ground areas are split up at arbitrary boundaries to limit the extents of representing data objects. Sometimes a split is justified, e.g. at weirs. To get or compute the homogenous surface at a whole, all the patches used to represent it in the database need to be stitched together (joined, aggregated) first.

Rivers that are too wide to be mapped as line features are mapped with waterway=riverbank, either using way-based or relation-based polygons as described above. The tag riverbank comes from the early times of OSM when only the riverbanks were mapped like this, without them being used to render the area (river surface) within.

Sometimes other large areas (such as forests) are arbitrarily broken up into smaller polygons, too.

Problems with the current approach

There are several problems with the current situation:

Proposed solutions should ideally address all the problems and issues identified above. Partial solutions may however be useful as a basis.

Computing or deriving areas from other data

Having proposed super areas or super multipolygons above, keep in mind that Relations are not Categories. This means that either of these area defining methods should be employed only when computing or deriving it by a query is hard, computationally expensive or (atm) impossible.

E.g.: For the german primary road network, relations have been submitted to the database that collect primary roads based on their ref=* reference. Overpass API instances have shown that the same collection might be computed using simple database queries (e.g.

If the ref=* tags are maintained properly on each

need to be different from those updating the

redundant relations. Anything else is an error-prone maintenance burden.

To tag extra information about the complete road route, there are a bunch of possibilities:

Currently Overpass returns only objects based on existing geometry in the db. All boundary ways and nodes of area objects in the result set have to exist in the database (or its history). To extend the usefulness of Overpass API, it could however reply computed (derived) geometry when answering certain area queries. E.g. computing landuse=residential areas with a query based on contained elements might be feasible:

For this, all residential buildings within a bbox or administrative boundary (or ..) could be used to compute and return minimum enclosing rings (plus a variable buffer) such that no two buildings within a ring are further apart than a query-defined width. A possible algorithm might

Note that such a query generates way and multipolygon objects that do not exist in osm's database. Depending on the implementation (adding buffer width), the same applies to nodes returned by such queries.

The additional capabilities might serve quality assurance and also help to unclutter some of the objects within the db in the long run. It might also initiate a focus shift from debates over mapping practices to querying practice and negotiate some disputes on tag usage/interpretation.

Computing areas from other computed areas

This raises several issues. It means that computed areas may be part of the source data for other queries, or in short: queries processing the result set of other queries. Any implementation would need to employ some form of mechanism to avoid or resolve circular dependencies and a way to determine query execution order.

E.g.: The is_in operator of the Overpass API query language replies all areas an object is contained in.

The trip point is replacing mapped static areas by eventual query counterparts. Using computed areas simply as a quality assurance measure or as a service to data consumers does not implicate such replacement.