Project Of The Week : Toilets

Public toilets (a.k.a. Lavatories / W.C.s) May be run as a local amenity by the government, or part of commercial provisions e.g. in a shopping mall. May charge a fee. Place a node (

) centrally at the location of the toilet amenities and tag it amenity=toilets. If possible use an area

for a toilet building and add a node

building=entrance to the entrance on the outline. (This is helpful for blind navigation users). 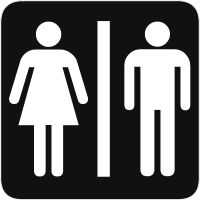 In case you didn't saw it, our mapnik style has been updated. Allotments became stribes, buildings gain a red outline, Reserves goes transparents ,...

In some countries like India and Japan, streets do not have names. Instead, the space between the streets (the blocks) are named. Like here A user reported problems with the results of nominatim with this kind of addressing. For now, in India, they use place=hamlet or place=locality to describe blocks. Some other users has proposed creating a new set of tags for this situation because the current scheme is tagging for the render.

The previously proposed and "rejected" feature for roads that are only passable in the winter has been reworked and put to rcf again. Now that the author has made adjustments, the proposition goes to the vote.

Please give your advice on the page.

In countries like Australia, there are many big roads with surface like dirt or sand. But on the main render of osm there is no distinction between those like for tracktype=*. The user propose a dashed way to render a none asphalted / paved surface. Maintainers of the renders are waiting for clean but clear propositions. if you feel up to the task, go for it!

For The second time, after a rework, this proposition to RFC. It proposes to rework the public transports tagging scheme : not enough possibilities , inconsistencies ,... are the things it tries to address.

After gathering some thoughts, a proposition of a sub-key "civilization" has been made. This is a tag to describe roughly, which civilization (or ancient culture) has built a feature or is somehow else connected to it. The tag is mainly intended for historical features as a subtag to add further detail.

This proposition is a tag to separate normal traffic signals from ones that are only used in emergencies and remain inactive (flashing yellow; stays green; or completely off) when not needed.

Scuba diving tags are not well defined in OSM, there is previously added tag like sport=diving or shop=dive but they are now often use. There are also another proposition but stuck since a long time.

This proposition aims to sum up some previous debates on this set of tag while trying to use much used tags.

This proposition is a set of tags to manage temporary things in OSM, like temporary roads, speed restrictions, ...