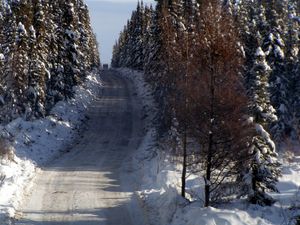 Winter road through a wood cutline 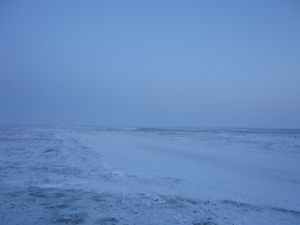 The fact that road is not a regular road, but a winter road, or even an ice one is a very important fact, and should be tagged on the map. 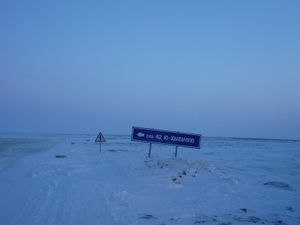 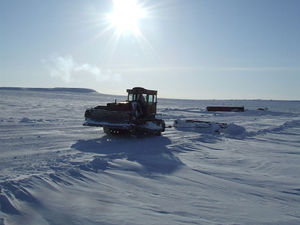 Winter roads are a common practice in Russian and Canadian north, where human population is very sparse, distances between dwellings are long 100 - 500 klms and terrain is swampy. In these northern areas many towns have on-land communication with "the continent" only during winter season. At the beginning of winter, when air temperature gets to a stable value deeply below zero, and a decent amount of snow has fallen, winter roads usually start functioning. This doesn't happen spontaneously. Authorities, that service a given road, use special machinery to level and tamp snow to a solid and smooth enough surface, so that roads can be passed by regular car. On all water crossings a thick level of ice is frozen over. After that road is opened for vehicles. A road is leveled and tamped during all its working season. Road can be temporarily closed during winter if snow blizzard is forecast. When spring comes and tamped snow starts to melt, a road is closed, and vehicles are not allowed to it. As consequence, winter roads don't have a strict working schedule, that can be tied to particular dates. Opening date vary from year to year.

Winter roads can be run by state or they can be commercial: run by a mining or oil companies, or lumber cutters.

Ice road is a special case of winter road, that run on surface of bays, rivers, lakes, or seas. Since surface there is absolutely flat, it is convenient to run winter road via it. In Russian language we don't actually differentiate between ice and winter roads, and use one word for them. 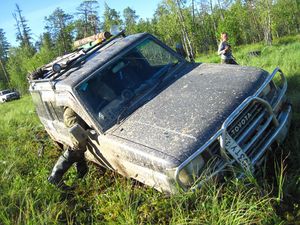 Most winter roads in summer are impassable

In most cases winter roads are laid upon bare terrain as it is, without any efforts to improve the surface under snow (however, if road runs through wood, a cutline is made). And terrain in northern areas is usually extremely swampy. Therefore, during summer a winter road in most cases is impassable. To avoid further speculations, I will mention: it MAY have passable sections (usually close to one of its destinations). It MAY be passable by extremely modified 4x4 or crawler tractor (if one has infinite fuel, however).

Obviously, ice roads doesn't exist during summer at all.

A lot of them in Russia above 60N parallel, the closer to north - the more. Just few:

Summer photo above taken on this road:

Should be rendered with the color according to the highway tag, but the line should have dotted border.

Navigation tools should be taught to avoid winter and ice roads.

First, when did having a ref number became a prerequisite to use highway tag? In Russia only trunks and most primaries do have ref number. We have hundreds and thousands of secondaries and tertiaries that don't have refnum. Second, winter roads aren't tertiary always, we have even primary winter ones. Finally, 4WD isn't required on winter roads usually, neither it guarantees that you can pass. Things strongly depend on weather. (This has been discussed several times already). --Glebius 15:26, 24 January 2011 (UTC)

My primary issue is that winter roads should never be confused with ordinary highways. Neither on the map, nor in a download file (XAPI) nor in a routing program. Though ice_road=yes is a logical barrier to prevent this, I am seriously afraid that some renderers/routers (just think about Kosmos and its many private rendering rules) will certainly ignore this tag. I would be happy if winter roads were considered as a route=* class (like ferry or piste). ice_road=yes is a marker to prepare these roads for an automatic retagging to route=ice_road by bots. I approve the creation of winter roads as route=ice_road like ferries, but not their confusion with ordinary highway=*. --FK270673 19:55, 24 January 2011 (UTC)

I understand your worries. However, that sounds like mapping for renderers. Renderers should know OSM tags, which are API, and that API isn't frozen. Renderers already should know that highway=track for example isn't an ordinary highway, and they can learn about winter roads. I've mentioned that in the proposal starting from its first version. --Glebius 22:41, 24 January 2011 (UTC)

The vote ended with total of 20 votes, which are 18 approves and 2 oppose votes.