From OpenStreetMap Wiki
< Gosmore
Jump to navigation Jump to search

It's your choice. If you post it here, it is easier to manage. For example hide facts that turn out to be irrelevant, group discussion by topic etc.

So I'm touring through Germany and Austria. What should I download ?

Germany as a single file is 1.3GB. It does not fit in the Windows Mobile address space and under Linux and Windows searching may be slow and include too many irrelevant results.

For multimap mode you need default.pak and a few rectangles that cover the area you are interested in. You can download them with the Windows or Linux version: Start the application and find a city that you are interested. For example search for "city:Berlin" and click the first item. (If the map blank, or nearly blank, you don't yet have a rectangle covering it and you are using default.pak) Then select O->UpdateMap. The download should start. When it's done, the file will be extracted and renamed. Restart the application and do this for the next city.

Alternatively go to this site and manually choose the rectangles : [1] Zoom in a bit and you'll see this red rectangle is the only one covering Bremmen. When you click inside it it becomes yellow so that you can see it's real size (it actually includes Brandenburg) and download it: Bremmen: [2] Koln to Leipzig: [3] East Germany & Poland: [4] East Germany North South: [5] North South (Ingolstad to Hannover): [6] Frankfurt to Stuttgart: [7] Munich: [8] Salzburg & Munich: [9] Austria & Hungary: [10] Bern & Stuttgart: [11] If you want to multimap mode, unzip gosmore.pak inside each one and rename it to NN..N.pak for example 0548034905860363.pak. Then place all these files together with default.pak in the same directory as the exe (Windows / Windows Mobile), or ~./.gosmore/ under Linux.

On Windows Mobile the bbox pak-Files mentioned above are too big... Is there any way to get smaller files (e.g. more, but smaller prebuilt-bbox files). I tried the smaller extracts, but it didn't work either --Svenglyxpilz 16:38, 14 February 2011 (UTC)

When I use Gosmore for mapping, there's something that bothers me: After I've added a note, I have to activate "Follow GPS" again. It would be nice, if Gosmore followed automatically after adding a node (or at least showed that green pin at the current position without moving the map). Maybe this could be done by adding a button "OK & Follow" to the add node window. 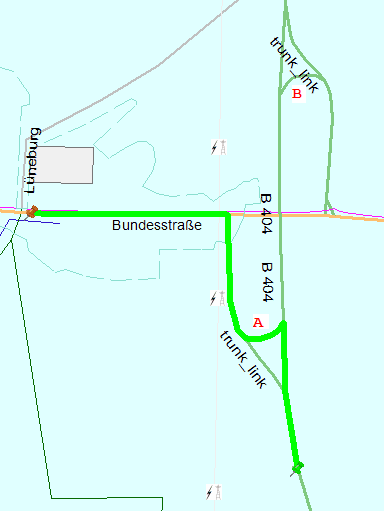 If Gosmore generates an illegal route, it is important to carefully look at the data. For example, the route in the picture includes a u-turn on a busy road. To fix the problem, the trunk way needs to be split at the 2 nodes where the u-turns occur and 2 no_u_turn restrictions needs to be added.

Map has only one parking icon

I builded map with newest svn version of gosmore. After building search list has streetnames so the data has correctly builded to pak-file. On map window there is only one parking icon (nothing more). I can zoom in and out and move the map but there isn't for example any streets or landuse areas. What's wrong? Same problem appears in linux/gtk system and wince navigator. --La4de 15:43, 6 November 2009 (UTC)

This particular problem is solved with the latest Gosmore versions. --Lambertus 18:54, 14 September 2010 (BST)

I have placed a previous version map .pak file along the .exe and .dll files in the SD directory. But when i run arm-mingw32ce-gosmore.exe it gives "mmap problem. Pak file too big?". Can this be because .pak file format has changed?. And as it is not hosted, how can i build a valid .pak file in win xp? --Sergionaranja 09:41, 18 November 2009 (UTC)

On Ubuntu 9.10 you need to have gtk dev, so install it with: "sudo apt-get install libgtk2.0-dev"

The bug with the lagging selection is fixed now. Black is automatic night mode and it will change to white when it calculates that it's day. -- Nic 23:09, 20 January 2010 (UTC)

It would be nice to have "iconset:0" to not show any icons at all. Sometimes in crowded areas there are too many icons to see where you are.

It would be nice if there were options to display additional information while being in map view / navigation mode.

Gosmore seems to give an instruction only when there is no crossing way before the intersection. A simple workaround would be showing the next instruction in a corner like that.

The old discussions have been archived at Gosmore/Talk2008

Indicate status of the O-Button

Gosmore should show what happens when the O-Button is pressed by changing it's label, e.g.:

I just compiled Gosmore from SVN. Started it, searched for "Hamburg, Germany", selected the result (the city name is displayed in the blue), pressed O and chose "Update Map". It downloaded some .pak but still did not display any map. I restarted it, no map. I manually downloaded http://dev.openstreetmap.de/gosmore/0530032905530340.zip and unzipped it to /usr/local/share/gosmore (that's what "make install" created). No luck. I had the same behaviour when I tried the Debian Armel build on another device. I am probably just missing some keypress or something like that?

I've been using Gosmore on a Navigon Transonic 6000T for 2 years, with no problems. This week I tried it on a Navman S50 3D. Gosmore runs fine for displaying the map, and for routing, and the menu seems to work as I would expect. My problem is that it crashes when I try and add a POI or trace a way. I can click the "add way or poi" icon, I can trace a way on the screen, I can click the menu icon again, and the way and POI list comes up, but as soon as I click one of the way or POI icons I get a "Fatal Application Error. Exception 0xC0000005, Address:00000000". I have tried with both the download from sourceforge, and a most recent build I built myself, and the same issue occurs. It's frustrating as otherwise I really like the Navman. Dmgroom 12:06, 12 August 2010 (BST)

Can't I use the extracts to create AutoPak ?

I tried similar as in described above in Touring through Germany... by downloading the regional extracts for some "Bundesländer". First I used only Nordrhein-Westfalen [14], unzipped and renamed to default.pak, which worked well. Then I tried to expand my travelling area to Niedersachsen [15], unzipped and renamed to 000001.pak, which did not work. Is it necessary to have a 16 digit-filename? Do I have to use coordinates (which?) as Filename? I'm a bit confused ... can anyone help me --Svenglyxpilz 13:53, 10 February 2011 (UTC)