This proposal describes the import, now complete and being validated, of roughly 300,000 building footprints in Hamilton County, Ohio, United States. Hamilton County is the most populous county in the Cincinnati metropolitan area. Data is available from the Cincinnati Area Geographic Information System (CAGIS) via the City of Cincinnati under a public domain license. Imported building footprints include some address, height, and building use information.

There are two datasets involved in this import. Both are from the same source.

On its website, CAGIS doesn't explicitly indicate the copyright status of the building and parcel datasets but only requires that a disclaimer be acknowledged. The City of Cincinnati, a CAGIS member agency, lists both datasets as being in the public domain.

If you agree with the disclaimer provided on our data site and provide CAGIS with a data creator credit, then you may use our data.

So, please make sure that if you want to use CAGIS data (available GIS layers), refer us properly and provide CAGIS disclaimer on your website.

THE PROVIDER MAKES NO WARRANTY OR REPRESENTATION, EITHER EXPRESSED OR IMPLIED WITH RESPECT TO THIS INFORMATION, ITS QUALITY, PERFORMANCE, MERCHANTABILITY, OR FITNESS A PARTICULAR PURPOSE. AS A RESULT THIS INFORMATION IS PROVIDED 'AS IS'. AND YOU, THE REQUESTER, ARE ASSUMING THE ENTIRE RISK AS TO ITS QUALITY AND PERFORMANCE.

"Available GIS layers" refers to the shapefiles available for download on CAGIS's main website. We use a subset from the CAGIS Open Data Portal and credit CAGIS in the form of source=CAGIS on changesets and have added their disclaimer to Contributors#CAGIS.

Code used in the preprocessing of data prior to import, as described in the following sections, is be available on Github. 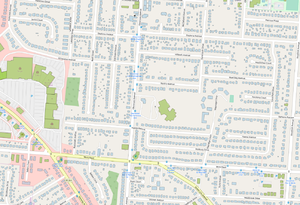 Sample map showing conflation of buildings with existing OSM data. Buildings to be imported initially are shown in blue, those already in OSM in green.

The import will have two phases, each with a separate tasking manager project:

When we started, there were already ~62,000 building footprints in the county contributed by OSM users. 82.5% of the import data (~295,000 buildings) however did not intersect with these. Buildings in the central neighborhoods were largely complete, so initially, the import has mostly affected suburban parts of the county. This makes things a bit easier as most of the buildings to be imported do not share nodes with existing geometries.

Very often, a building is deleted from OSM when the physical building is demolished. To avoid restoring demolished buildings, the conflation process will account for deletions that occurred after the CAGIS dataset was last updated. In case the deletion merely represented the replacement of one way with another way, CAGIS buildings that intersect with recently deleted OSM buildings will be included in the second phase for manual conflation. Participants are also tagging many demolished buildings as demolished:building=*, to keep these buildings from being restored either in the import or by armchair mappers by accident. 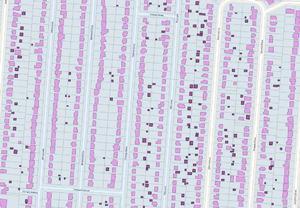 Sample map showing tentative identification of minor outbuildings that would not be assigned addresses.

Assigning addresses based on parcels is simple in some cases and more complex in others. To avoid using sliver parcels, we first only consider a building as belonging to a parcel if 90%+ of its footprint overlaps the parcel. We start by assigning addresses in the simplest case where there is a clear 1:1 correspondence between parcels and buildings.

Next we move to parcels that match to multiple buildings. Most of these contain minor outbuildings like sheds or garages that are subsidiary to a major building like a house. We want to assign an address only to the major (largest) building in these cases. Some large parcels have many buildings (e.g. > 20), so in this step we only look at parcels with 2 or 3 buildings.

What remains are cases where address assignment is more ambiguous.

This last case is seemingly used to indicate multiple ownership on the same parcel such as condos or duplexes. In these cases, we assign multiple semicolon-separated addresses to a single buildings sitting on multiple identical parcels.

As one final attempt to match addresses, any buildings sitting across multiple parcels, but where only one parcel has an address, and where the building is larger than 1000 square feet to avoid outbuildings, are assigned addresses from that parcel.

In total, the combination of these techniques, escalating from simplest to more complex produces address assignments (or correct non-assignments) for 86.5% of all buildings. The contribution of each method is displayed in the table below.

The remaining buildings not assigned addresses are quite scattered and present many issues that will just need to be dealt with manually at a later date, or by import with a better address dataset in future.

Many buildings contain points midway along an essentially straight line. Such points are simplified away with a tolerance of 0.2 meters. Topology is maintained where buildings share nodes.

Only the building footprints are being imported but some tags are be drawn from the parcel dataset. The buildings dataset has information on building height (including levels) and use category. The parcel dataset has address information. The address information goes into two tags, addr:housenumber=* and addr:street=*. addr:street=* is be derived from two fields: a name for the street and the street suffix, e.g. Avenue, Road, etc. Street addresses were be expanded from abbreviated forms and checked for Title Case Capitalization. Details on the method of address assignment from parcels are in the next section.

Buildings also have some information on use that could be mapped into various building=* tags.

This is a list of data quality issues discovered during import. Keep an eye out for them as you validate.

There is occasional disagreement between addr:street names and the names on streets, for example whether a way is named '...Street' or '...Road'. These can be hard to catch during editing - a query after the import may be the best way to catch these cases. This usually effects all buildings on a street.

The first phase of the import began in December 2018 and is mostly complete. Some validation work still remains.

Minh Nguyen began undertaking the second phase manually on December 25, 2021. This phase can migrate to the tasking manager if others express interest in collaborating on it. There are 62,106 ways to conflate with existing ways.

Contributors will use special-purpose import accounts with names ending in _cincyimport.