About
The Java Applet was a Java-based in-browser editor. It was the original editing interface appearing on the 'edit' tab on the OSM homepage.
Reason for being historic
This was replaced by the Flash-based in-browser editor Potlatch back on 5th May 2007. See also History of OpenStreetMap.
Captured time
November 2016 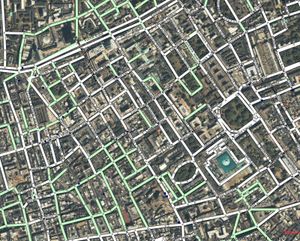 London data shown within the applet, with Yahoo! aerial imagery in the background, back in 2007

Status: Since then the java applet has not been maintained, and is not running anywhere. It does not work with the latest API version. It is compatible with API v0.4.

If anyone does want to see and use the applet you will need to host your own copy or run it as a local java application. But since it doesn't work with the latest API, it will no longer function as an editor.

Software described on this page or in this section is unlikely to be compatible with API v0.5, and API v0.6 (current version) deployed in 2007 and 2009.
If you have fixed the software, or concluded that this notice does not apply, remove it.

In order to edit maps, you must be registered and logged in.

Originally you were then able to go to click the "edit" tab to take you to the Java applet for editing. Currently to run the java applet you will need to run your host your own copy or run it as a local java application.

The Java Applet editing interface uses Java, so be sure to enable it in your browser. It requires Java version 1.5 or above. Get the latest Java browser plugins from Sun's download page (or your favourite JVM provider)

The Java applet requires some extra permissions, which you will need to grant.

This screencast gives a brief, high level introduction to editing with the applet.

When the applet loads, you will see a view of the map with a satellite photo beneath it.

In the top left corner is a toolbar, with features described below.

Everything you do is saved as you edit, so there is no separate "upload data" stage.

The following tools are available in a small toolbar in the top-left. Descriptions will also appear in your browser status bar as you mouse over the toolbars.

The purpose of the editing applet is to allow you to enter nodes, which define points on a road or path etc., and then for you to join these nodes together to form line segments, which define the path of the road or path, to produce the basic map. Line segments can then be combined with adjacent segments to form part of a longer "way". The following explains how to do these simple tasks.

Go to the viewer and zoom in on an area that you want to work on. It helps to pick an area that you know reasonably well. The place where you live is probably the best place to start, then work outwards from there. If what you see doesn't make any sense then pan around a bit until you see something distinctive that you recognise.

For an instructional video, created by Imi, which shows the more advanced features of the applet see: http://www.eigenheimstrasse.de/josm/tutorials/applet-tutorial-ways.ogg (playable with VideoLAN).

Integration with other editors

Many OSM contributors use the applet in conjunction with other editing tools. Examples:

Using a different editor for some tasks means that you can edit your data while the applet is busy loading the next area.

There are a number of bugs in the Java applet. We keep track of these using "trac" (bug-tracking system). Query to find all applet bugs. You can raise new bug "tickets" directly if you create a trac account, alternatively discuss the issue via one of the Contact channels.

The applet will spew debugging information including Java stack traces to the JVM console. This may be useful in diagnosing problems, particularly when the applet seems to crash. On Microsoft Windows, Look for a little Java icon (blue coffee cup) in your system tray in the bottom right. Right click and choose "Open console". This may vary depending on JVM installation options and certainly operating system.

Potlatch was deployed on the website in May 2007. This is a flash based alternative to the applet, targetted at the same audience. Since then there has been little development progress on the applet.

There is still some potential use for the applet, to provide an alternative editor for people who cannot run flash (might also run better on some devices)

The applet code will currently not work with API v0.5 (some major changes including no more 'segments') so that would be a priority for anyone wishing to revive this work.

The applet is quite simplistic, especially compared with JOSM (standalone java app). The reasons...

With simplicity in mind, a lot of new development ideas may be rejected, despite being good ideas.

The source code and resources are under applications/editors/applet

To do a proper subversion checkout see Getting The Source

Implemented as a Java applet - not directly on AWT, but using a library/framework from processing.org.

The UI has achieved simplicity in some ways, but maybe could do with some changes to make more intuitive - suggested enhancements are in trac.

There have been some major bugs that effectively crash the applet. Mainly these were due to a lack of appropriate synchronisation - fixes are committed and now under test - please see Concurrency below for detail on the new concurrency conventions.

The code has been tidied up somewhat recently, but the edit code is still a bit hit and miss. All the code's there though, and is eminently fixable/tidyable.

Following is what the applet's main classes do.

Dialog-handling for editing of map and message boxes. NB: Not all GUI code is in this package.

And some classes modelling map features (should probably be in a 'model' package, not util):

There have previously been problems with handling of concurrency in applet - following these conventions should keep the applet in-order, reliable and responsive:

The threads used by the application, with their lock-order conventions:

The synchronisation objects used in the applet, to be locked in orders specified in Threads above. The locks are listed below in a rough high->low order (rule of thumb: lock high level locks first, then lower, never obtain high level locks from within lowest level objects):

There are a number of these, passed in html applet tag's param sub-tags (see map edit page source).