Kapor (sometimes referred to as kapor2) is a portal of Slovak cadastral office. The main website (in Slovak and English language) is located at www.katasterportal.sk/kapor.

It contains information about:

There is an ongoing import of building (polygons): WikiProject_Slovakia/Sources#Cadastral_map which is - as of June 2015 - near completion. 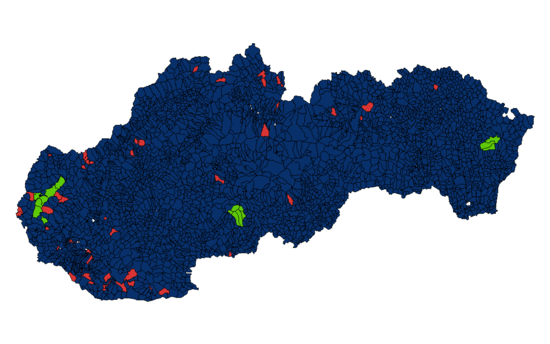 Slovak community is preparing a semi-automatic import of the available data to OSM. See below.

As the data are specific to Slovak Republic the discussion and information about project are on the Slovak version of this page.

We will try to translate the most important parts to this page when we reach the agreement here as well.

The data are freely available to anyone by law as they were created by government agency using tax payers' money. There are no copyrights on the data. This has been confirmed by Head of Cadastral Office in 2009: http://wiki.freemap.sk/KatasterPortal (Slovak).

Slovak Cadastre does not contain information about street numbers (addr:streetnumber) which are used as a part of Cs:WikiProjekt Česko/Systém adres, this information has been however retrieved from municipalities of towns and cities as a separate activity effort. The information are still being cleaned and prepared for automated jobs.

Due to the fact that for villages/smaller town only utilizing conscription numbers (addr:conscriptionnumber) we do not need these data, we will split the import into two phases:

The plan is to import conscription numbers of all cadastral areas one by one (with tracking and manual check prior to import - similarly to http://ruian.poloha.net/czaddr/). Not all villages/cadastral areas are available (digitized) at this moment (the process is ongoing), this should not matter too much as missing cadastral areas can be imported later.

The areas containing only conscription numbers (w/o street numbers) were identified using the following approach:

This list will be constantly refined based on user inputs. 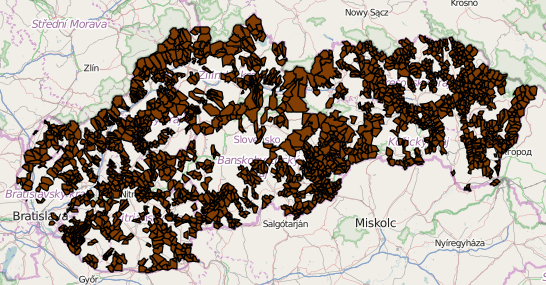 Approximate scope for import of conscription numbers from Kapor

The following data is available:

Quality of the data as observed by long-term mappers is "quite good" or "(addresses) fitting exactly". Quality can be slightly improved by removing duplicate points (per cadastral area).

Data has been imported to Postgis for easier manipulation and running spatial queries.

Mapping of features to tags

Example output for one cadastral area (Temeš) with real numbers replaced with random values is located at https://freeshell.de/~jose1711/skruian/.

The plan is to import conscription numbers and related street numbers of all cadastral areas one by one (with tracking and manual check prior to import - similarly to http://ruian.poloha.net/czaddr/). Not all villages/cadastral areas are available (digitized) at this moment (the process is ongoing), this should not matter too much as missing cadastral areas can be imported later. Furthermore, not all municipalities provided tables containing assignment street name - conscription number - street number for various reasons hence those will be excluded from import (permanent addresses of residents could provide the needed information to some extent but this options has not been explored in detail).

There is an ongoing process of data preparation and clean up of data provided by municipalities. ETA: september 2015.

Progress in this phase is expected once conscription numbers import is in full swing.