From OpenStreetMap Wiki
Jump to navigation Jump to search
Key:addr:conscriptionnumber - Other languages

The conscription number is a special kind of address that relates to a settlement instead of a street. The tag is used only in places where an object both has an address referring to a street and also one referring to the settlement.

Conscription numbers are known in Austria as

Konskriptionsnummer, in Czechia as "Číslo popisné"(cs), in Slovakia as "Číslo súpisné"(sk) and in Hungary as "Helyrajzi szám" and can usually only be found there.

This key is accepted as a part of the widely used, official address tagging system in Czechia and Slovakia.

The "conscription number" name is result of their initial purpose - numbers were assigned due to needs of military administration. And initial use was for conscription-related purposes.

If each object has only a single assigned number then only addr:housenumber=* is used because it is already unambiguous. For example, in places where streets have no names, such as it is the case for many villages and smaller towns around the world, house numbers relate to the addr:place=* instead of the addr:street=*. 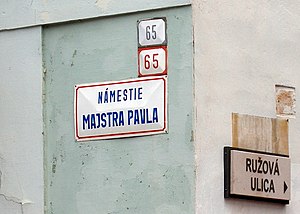 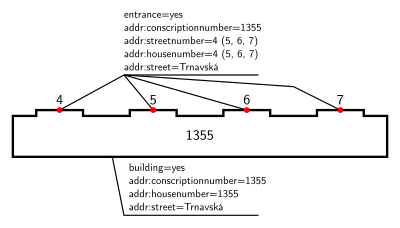