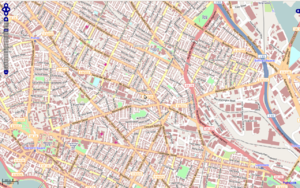 The building and open space layers from MassGIS have been imported for large swathes of Massachusetts, thanks to effort by User:crschmidt and others in the region. map

MassGIS (mass.gov/mgis) is the Commonwealth's Office of Geographic and Environmental Information. Some data from MassGIS has been imported into OpenStreetMap.

Note on copyright from e-mail exchange with MassGIS:

All of our data is paid for by the taxpayers and is therefore in the public domain. We do prefer to be credited though in any publications... When using MassGIS data on maps or in digital applications, source credit should be stated as "Office of Geographic and Environmental Information (MassGIS), Commonwealth of Massachusetts Executive Office of Environmental Affairs".

On 2020-02-21 a MassGIS person confirmed that the 2019 Orthophotos are usable for OpenStreetmap (and other purposes). MassGIS appreciates attribution but it is not required. (Omitting name and not posting the mail because this is a odd combination of a public record and standard courtesy of not posting email.)

Please refer to the MassGIS list of available datalayers.

Three towns were omitted from the initial import for various reasons:

Please add information about these imports.

Please add information about this import.

Around 2011-10, Calvin Metcalf imported most of this layer, and then various people edited to resolve minor issues. As of 2012-03, it is believed that town boundary data in OSM is in pretty good shape. (However, coastline data was not necessarily aligned with town boundary data, this was fixed by importing the offshore town boundary layer in Aug-Sep 2012, see below).

A comprehensive list of boundary relations for each town/city which incorporates the survey points layer (and the offshore layer, below) can be found at: Massachusetts/Boundary Relations.

MassGIS released an updated boundary data set on 2019-09-03. This updated geometry was finished being applied to the existing OSM boundary geometry on 2020-06-02. Each line was checked manually one at a time, and any errors from the previous imports was removed. This included removing source & attribution tags from the nodes & ways. The source tag was added to the changeset as per current policy. Duplicate lines underneath the admin lines were removed. MassGIS notes several boundary discrepancies still exist. In addition to these the MassGIS boundary of NW Brookline did not mesh up with the parcel map, so it was made to align with the parcel map instead. In cases where boundaries were obviously meant to follow a lake's shoreline, the boundary was attached to that.

As the above survey point layer lacked the offshore boundaries, in Aug-Sep 2012

massDOT (on osm, edits, contrib, heatmap, chngset com.) imported the offshore boundaries only and connecting them up to the onshore town boundary and have adjusted the town relationships and county relationships, accordingly. The tags used for import are: attribution=MassGIS and source=massgis_offshore_town_boundary_import

The MA state boundaries has been fixed to be the outer coastal boundary of all towns/counties. Join the discussion on the Talk:Massachusetts/Boundary Relations talk page. As of early Sep 2012, there is still some checking on all relations to be done. See also: diary entry

This layer is 15 cm color leaf-off orthophotos, acquired from airplanes in spring 2019. MassGIS refers to it as USGS because of joint sponsorship, but within OSM the preferred label is "MassGIS 2019".