Minecraft is a game involving a 3D world of blocks. Blocks form landscapes of land, sea, rock, trees etc which can be generated randomly or designed externally and/or shaped within the game. OpenStreetMap map data can be used to generate a world, as a "converter". There are several implementations of this idea:

Minecraft Earth is an official augmented reality spinoff of Minecraft for Android, iOS, and iPadOS. [1] It uses OpenStreetMap data to locate tappable adventures in places within the world that are likely to be safe for gameplay with enough maneuvering room. [2][3] 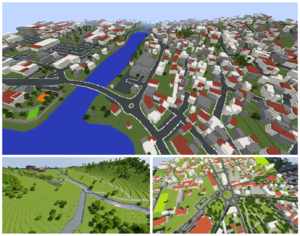 This has been the first (commercial) implementation of the concept with some free demontration maps on a few cities.

"Based on available OpenStreetMap data, our engine make Minecraft worlds from everywhere on the Earth’s surface – on-demand." (for a small fee)

Christopher Gutteridge describes how he spent countless hours making a 3D model of Ventor (a place in the Isle of white) by placing blocks in game (battling zombies at night time all the while!) He did use OpenStreetMap at this stage, for planning, however later went on to create a converter, which took OpenStreetMap data and produced a minecraft map in an automated way. All detailed in the 'making of' section and open source on github.

Now he's back! With Minecraft Newport ^

It doesn't use directly OpenStreetMap data, it uses official open data from Rennes Metropole (which is published with a license compatible with OSM), and some of this data has been integrated in OpenStreetMap. Most buildings were imported from the French cadastre, but OSM contains many more details, which are ignored for the Minecraft rendering. Anyway the site uses this rendering to bring access to citizens in planning the develomment of the city and its environment, and to allow seeing simulated projections of the ongoing projects. This (unusually large) free map will then contain interesting suggestions or can similate what will be built in the city and measure the impact more visually than just technical maps of architects that are hard to read for the public or do not necessarily place the projects in a more global city view. So it focuses first on current construction projects and ongoing works in the areas that will be affected by projected or ongoing works, without forgetting their existing environment.

Blog post: How to design a Minecraft-inspired world with Mapbox and Unity is a demo of a new Mapbox unity integration. The output is not minecraft, but a similar Voxel landscape. And actually the source data is only a little bit OpenStreetMap ("giving distinct colors to grass, wood, water"). It's mostly whichever terrain data mapbox brings in.

Minecraft fun is an area where Ordnance Survey have pipped us to the post. Ordnance Survey Terrain data has been converted to minecraft, as a hack someone did at one of their events, and they frequently use this as a flagship example of the kind of interesting unexpected outputs you get from open data.

It's worth noting that conversion of terrain data to minecraft is a more obvious option really, since it works at any "zoomed" out scale factor you might choose (How high should a 1000 metre high mountain be measured in blocks within minecraft?) OpenStreetMap doesn't have terrain data directly. Any relief maps with OpenStreetMap are built by bringing in 3rd party terrain datasets (of which this Ordnance Survey data is one option in fact). To convert OpenStreetMap to minecraft you're really looking just at 3D buildings data, for which the scale factor needs to be quite "zoomed in" (How high should a 3 storey building be measured in blocks within minecraft?)