Please note that I have stopped development of this map (there's nothing much to make better for now, except for searching through proposed features to add even more definitions - it had more definitions than any other OSM for Mapsource map before development stopped though (I included all definitions that were used by teddy and some others). If you simply want a very nice rendering for a very large area (like Austria in one rendering) - than you could stay with this process. If however you want best quality maps for Mapsource, and even more features, then I advise you to use the process I use here: OSM_Map_On_Garmin/mtb_map. If someone wants to have a cycle specific map without focus on mtb tracks, then I would suggest archiving this topic, and building upon my mtb map.

I am of course very proud, that my map rendering for Mapsource has been features as image of the week on the main wiki page!--Extremecarver 17:40, 1 November 2008 (UTC) 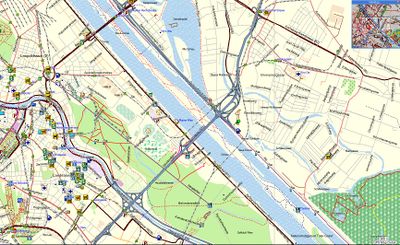 This Image was featured as Image of the Week on 1. November 2008

Notice: you can see the pink/turquoise cycleroutes even though the way they are using might also be tagged with other attributes that usually prevail. Blue Dotted is Cycleway and not Footway (red dotted)

http://ati.land.cz/gps/typdecomp/editor.cgi which is easier for beginners.

==== 13.10.2008 - I have uploaded a new csv definition file including the appropriate typfile. New: Many different sports are now differentiated (i.e. soccer, tennis, motorsports, climbing, table tennis, sport stadium, skateboarding and inlineskating, military buildings, .....), Visual differentiation between school, university, commercial, public, churches and cathedrals, .... buildings. Traffic_light will be shown. Also very importantly - bike rentals will be shown. I.e. all citybikestations in Vienna seem to be shown (free bike rental for up to 1 hour) - very useful for getting around cities on a bicycle. Differentiation between gondolas, chairlifts and drag lifts. Including glacier polygon. Also showing hunting_blinds, and windpower for better orientation. Using theese definitions including typfile now renders a map that differentiates between more relevant features than Osmarender for example (at least in Vienna, I haven't included land features that are specific to deserts for example). --Extremecarver 17:01, 13 October 2008 (UTC)

==== 16.10.2008 - Sorry hadn't uploaded the new files as there were some repairs still to do. Will upload the new files now. Searching for the new POIs should work pretty well too. As a sidenote: it's important that POI get defined with a proper category, so that they don't clutter the search function in the wrong category.

==== 19.10.2008 - Removed --net from the mkgmap compile process. This resolves the mouse tooltip bug present in the --net feature of mkgmap. Therefore no more "locking on road".

==== 29.10.2008 - I will upload a new approach using osm composer here in a few days. This revolutionizes the process of creating garmin cyclemaps. The concept is already dead on, I only need to transfer the map_features.csv properly to osm composer.

I just tried to get SRTM coverage for the whole of Austria With a rectangle around it using SRTM3 data and - step 10 (every 10m a contourline). This resulted in a 11.4GB osm file. Anyway here is the text that I used in a batchfile to get the data for whole Austria:

To build it I used the following batchfile (for a smaller region).

If you now use a osm file from geofabrik as data.osm you can add contourlines to it. It's not difficult to do, but if you want to do this for a large region better use a PC with lots of RAM and empty disk space. If osmcut works perfectly for you, you could also use the command above with the 11.4GB srtm.osm or even from a bigger region.

Needed: Someone who can rewrite the mtbmap.pl to include mtb trails and tracks (leave the cycletracks inside) (Maybe this can be achieved soon with OSM Composer).