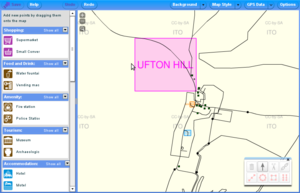 OS Locator (OSL) is one of the datasets which were released in 2010 as part of the Ordnance Survey Opendata releases in the UK, but it is now being discontinued (see below). OS Locator is a file with a list of road names and positions for the UK. Although the file does not give road geometry, it does give a rough location for every street. This is good enough to use as check list / comparison dataset, in tools for Quality Assurance of OpenStreetMap and for measuring completeness.

In March 2015 OS announced that the OS Locator product will be discontinued because it is replaced by OS Open Names. This new product "combines the best elements of the 1:50 000 Scale Gazetteer, OS Locator and Code-Point Open"

This means the following tools will most likely start to go out-of-date (in terms of OS data, but probably still up-to-date with OpenStreetMap changes) Unless/until they are migrated to use OS Open Names

There are several tools for comparing OS Locator streets data with OpenStreetMap.

You should never just change street names in OpenStreetMap to match OS Locator names. That's really not the idea at all! By doing this, you could be using information with errors and overwriting information which has been properly surveyed by people out on-the-ground. Even if the surveyed OSM data looks like an error, you should assume that data is correct unless you can get there on the ground to check.

It is also quite widely regarded as unhelpful to copy streetnames from OS Locator for places you have never visited. In the UK we are building strong local communities of mappers, and therefore armchair mapping techniques tend to be frowned upon. However some people are doing this in some areas. If you do this you should definitely use the source tag (and probably on the elements themselves) :

If this tag is used on elements (as opposed to changesets) then mappers should be bold and remove the source tag or replace it, when they have surveyed and verified the street name.

TODO: More general notes on interpreting the differences and corrective actions to take with editors.

This method has been tested using Ubuntu 9.04. It requires the following:

Cut down data to Bath City area only

Currently, BANES.gpx has all the roads in the Bath and North East Somerset area. I only care about the roads actually within Bath, so we need to cut down the GPX file and extract only those roads which are within the city. This is done using the polygon filter in gpsbabel.

You now have a GPX file which can be loaded into JOSM or Google Earth.