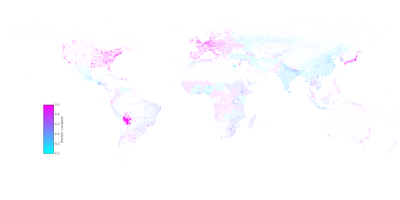 Road network completeness levels calculated in a 2017 research article by Barrington-Leigh and Millard-Ball, which also finds OpenStreetMap overall to be ~83% complete

Measuring completeness has been an ongoing challenge for the OpenStreetMap community.

The various completeness studies outlined below have used a range of techniques to estimate completeness:

The ability to use OSM data itself to bootstrap completeness estimates becomes more important for areas where large volumes of current statistical information are lacking, or for features which are not important in official data.

The map is never complete

Is the map complete? In true wiki-style, the answer is, the map can never be complete. There will always be more details we can add to the map in any particular area. However levels of completeness do vary widely across different areas of the map, at all scales. Some countries and provinces might have complete landcover, waterways, etc. mapped while others might lack such features. In one town mappers may have collected all the fine details of every shop with addresses, opening hours, wheelchair accessibility information etc. (see Completeness/example). Meanwhile, neighbouring towns may just have a basic road network. One school might have all rooms, doors, paths mapped, while a nearby school might only be mapped as a node. In some parts of the world the map is still a blank slate.

OpenStreetMap is a project involving mass collaboration. We need large numbers of people to get involved to help us create a free map of the world. If an area is not complete, it's because we didn't manage to get anybody involved in mapping that area yet. We'd love to attract local people who will enjoy mapping their neighbourhood and taking ownership of their map. But also existing OSMers can fill in the blanks by travelling to those areas. An incomplete map is a just an opportunity waiting for somebody to go do some mapping!

Many people are curious about how the project is progressing. Other people are interested in using OpenStreetMap, and need to assess how complete the map is. Within the project we're also keen on figuring out where the juiciest mapping opportunities remain. For these reasons it's important to try to measure completeness, establishing metrics to enable us to track progress and perhaps plot a map of how complete areas are.

OpenStreetMap has to maintain a strict clean-room approach to inputting of data, but there may even be issues around use of copyrighted or licensed map data sets for completeness analysis. This makes sense if you consider that any completeness map could be used by the mapping community, steering them towards areas where OSM data is missing a bit. If we can see that an individual road is missing or wrong, then this starts to feel like copying. Zoom out a bit, and maybe it feels more acceptable, but this is exactly the kind of shades-of-grey legal issue which we like to steer clear of, by avoiding proprietary data sources entirely.

So we shouldn't really use existing maps to test completeness of our maps. That leaves us with a rather tricky challenge. How can we test completeness? In the above links you'll see that some people have turned a blind eye to some extent, whilst others have come up with rather clever calculations of completeness metrics using only OSM itself, or other open data sources.