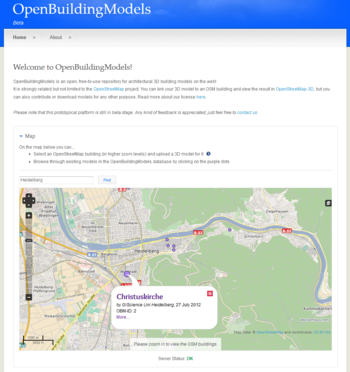 OpenBuildingModels was a free-to-use online repository for architectural 3D building models. It had been developed within a research project at the Chair of GIScience, University of Heidelberg and was available online under http://openbuildingmodels.uni-hd.de. The spiritual successor is 3D Model Repository.

3D Development plays a more and more important role in the OSM community. However, modelling 3D objects with only nodes, ways, relations and tags is very difficult to do. It only allows for a modelling up to a certain level of detail. Very complex 3D structures like architectural building models are hard if not impossible to model. As discussed at the 2nd 3D Workshop Garching, the use of external repositories is more appropriate for this. The data in these repositories can then be linked to the OSM world.

OpenBuildingModels was such a repository dedicated to architectural 3D building models. The idea was that anyone could contribute to it by uploading a model, and models could be downloaded for any purpose. They were released under the Open Database License. The project is strongly linked to OSM-3D, since the uploaded models appear in this OSM globe (see below). However, the link to OSM(-3D) is not mandatory and the models can also be used for any other purpose.

For more details about the objectives of the OpenBuildingModels platform, please refer to the Publications listed at the bottom of this page. 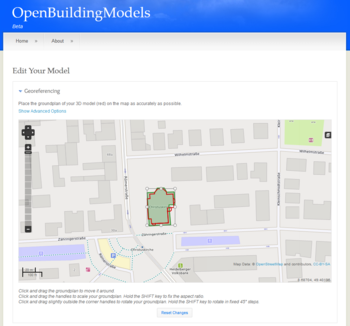 Geo-referencing a 3D model with the OpenBuildingModels platform

Try it out yourself! http://openbuildingmodels.uni-hd.de

The OpenBuildingModels web platform allows to:

The upload workflow is roughly as follows:

The link of the 3D models in the repository to OpenStreetMap is established with a new tag called building:obm=*. The value of this tag is the unique ID of an OpenBuildingModels model. That is, if you want to link an OSM building (way) to OpenBuildingModels (OBM), you just need to look up the ID on the website and add this tag accordingly. The web platform also offers to do this automatically for you at the end of the upload process, if desired. 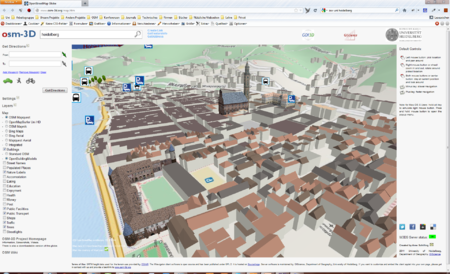 OpenBuildingModels is strongly linked to the OSM-3D project. Uploaded 3D models with a valid OSM link can be displayed in OSM-3D instead of the default building blocks. Hence, the level of detail in crowdsourced 3D city models is greatly improved.

The current prototypical platform still has some limitations: