OziExplorer (oziexplorer.com) is a navigation and mapping software for Windows and Windows CE. It is a closed-source commercial software, with paid-for licensing and free trial and free shareware versions. As well as displaying raster maps, it supports uploading and downloading of tracks and waypoints to most Garmin, Magellan, Lowrance, Brunton and MLR GPS devices.

In the version 3.95.5d there is finally experimental support for OSM (and other internet map services). You need to download a special map file, which provides an control panel, and a working internet connection. Downloaded tiles are cached and stored for further use, so there is no need to download it again. Further information can be found here: [1] 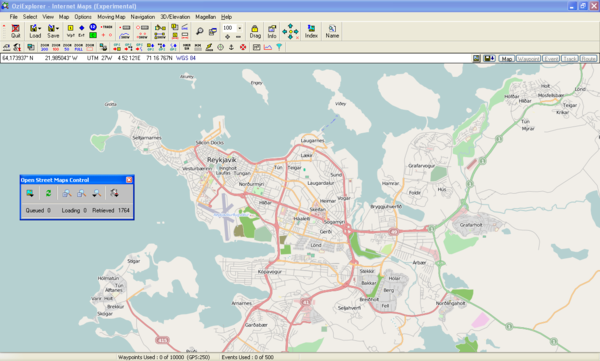 OziExplorer comes in three flavours: a full version for PC and versions with fewer features for WindowsCE and Android devices. The PC version works with OpenStreetMap and derivatives such as OpenCycleMap as well as Google and others, but there is currently no provision for user-defined on-line maps to be added. On a PC it acts as a viewer for maps on which you can add annotations and overlay routes and tracks from a number of sources, including live NMEA messages. It can read maps in a variety of raster file formats and will georeference them if such data is embedded in the file but otherwise you create a georeference file (.map extension) to calibrate the image.

The portable versions were conceived before the mobile internet, and do not support on-line maps, but they continue to work in the outback and at sea! Many satnavs run WindowsCE and can be hacked to run OziCE, but the weapon of choice now is an Android tablet. The Android version is still under development, though. These versions read raster data from local files, preferably in the proprietary ozfx2 or ozfx3 formats, but also in ECW or JPEG2000. The ozfx files are generated with the img2ozf conversion tool and contain pre-rendered versions of the base image at various zoom levels but the software makes other zooms on the fly. A mobile device running OziExplorerCE or OziAndroid should make a good data gathering device for OSM data. Waypoints can be added and annotated in the field and tracks can be recorded. The resulting files are convertible to GPX or anything else using gpsbabel. There is a very flexible screen designer where you can set up buttons for the functions you use a lot.

The simplest tool for making maps for OziExplorerCE and OziAndroid from OSM is MAPC2MAPC. Areas can be downloaded from OSM (and other online map sources including some WMS) based on a location or to include the extent of a GPX track or route. The program will create these as a OZF2 file and accompanying MAP calibration.

Otherwise, making maps for OziExplorerCE and OziAndroid from OSM requires production of a raster image, calibration with the PC Ozi (the shareware version will do this) and conversion to the ozfx format. To get images of OSM over your area of interest, you could query OSM with Overpass and render with Mapnik's generate_image. Alternatively, Googleak (see the TrekBuddy website) is useful as it can download all the tiles you need and output the required calibration file. Each map is at a single OSM zoomlevel and will be scaled by OziExplorer but you could make one for each zoom level (or, say, 18, 16, 14 ...) and Ozi can switch between them quickly. For viewing out in the open, especially on older equipment, you may find adjusting the gamma of map images to, say, 0.4 useful before converting them.

You can use some pretty big rasters (e.g. 20,000 pixels square) but if you do need more than one sheet at the same scale, you set up the overlap areas when you calibrate the map and Ozi will automatically load the next sheet when you get near the edge.

Many mobile device need don't use specific OSM format but their own proprietary format like Garmin(*.img) or WhereAmI (importtodb.7z). Some tools can be used to convert osm map to ozi map compatible on desktop & mobile version. This page cover gui tool that directly support osm data in input and ozi compatible file in output rather than other solutions like:

The tools differ by:

For downloading a small number of tiles along with a calibration file for OziExplorer, BigMap 2 could be used. For generating bigger georeferenced images with Mapnik, use Nik4.

OziExplorerCE is a separate product in the OziExplorer family that requires a separate license to run without limitations (GPS communication will require manual restart every 20 or 10 minutes).

The best way to work when using OziExplorerCE is to know which road have been already design in osm map. The tools described after can produce files (projection, raster graphic, vector) with or without deal with projection knowledge for produce files that'll be compatible with oriexplorer/oziexplorer. The file compatible for oziexplorer have to be convert before import them in oziexplorer CE using a converter of name "IMG2OZF". This tool convert .ecw/.tif/.jpg/.map files into special .ozfx3/.map file format best in terms of memory consumption [2].

The last version of Img2ozf (3.03) exports only in the new format extension *.ozfx3!! For find location ; oziexplorer use like OSM gns Service. 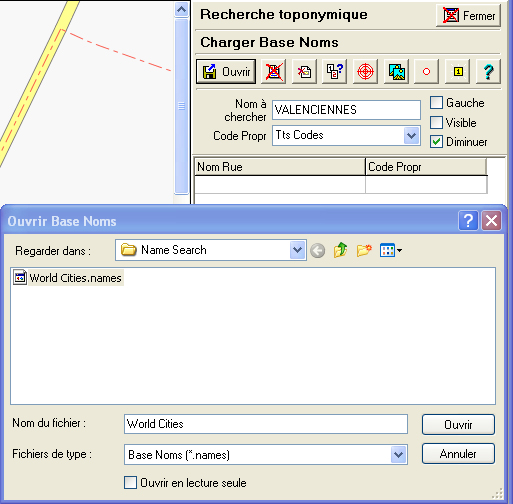 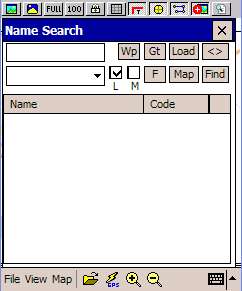 The chapters about perl is not compatible with the new 0.6 OSM API not the perm script.

if you use other gis software that support natively access to some tile rasters of osm [3] and could export raster with georeference compatible with oziexplorer then use it!! Here the capture screen that show which raster must be used. The first chapter is about manifold and ecw file. 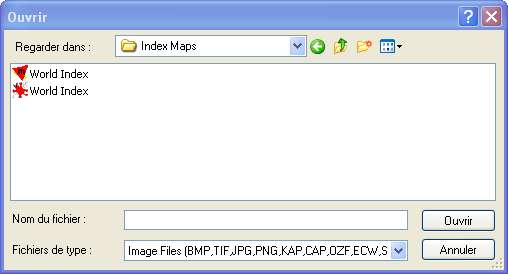 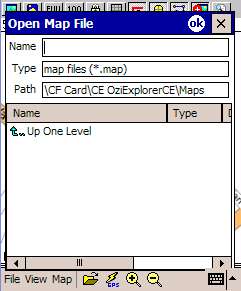 The tools described here differ by the output file, some create calibrate raster files where map file will be extracted, others create only map files that will be used to extract raster files. The best tool will extract map and tiles file at once without the need to use other steps/tools. The only projection supported by OSM is WGS84. The more difficult step will be to have a non calibrate raster file (scanned or merge from tiles images) that must be calibrate using well known coordinate point (two lat long point left-top and right-bottom) in a well known projection setting. In some case the calibration could be wrong so read this article [4].Some professional gis software natively support access to osm data so avoid use specific osm tool (use free tools, command line ogr gdal perl ...).

It's a must-have tool that supports access to the OSM server in the aim to export in a *.map and a *.jpeg file. NoniMapView support only jpeg file format (no others formats).

You can find OSM-map here to manage projection tiles using URLs on "a.tile.openstreetmap.org". More steps are needed compared to NoniMapview, like converting to valid TIF, but it supports many projections (*.tab *.map) and raster graphic formats (*.jpg,*.png,*.bmp,*.gif,*.tif). 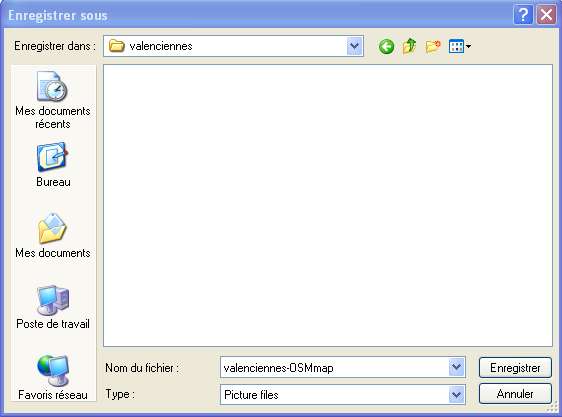 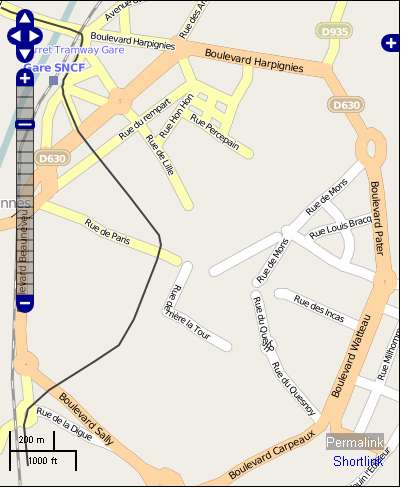 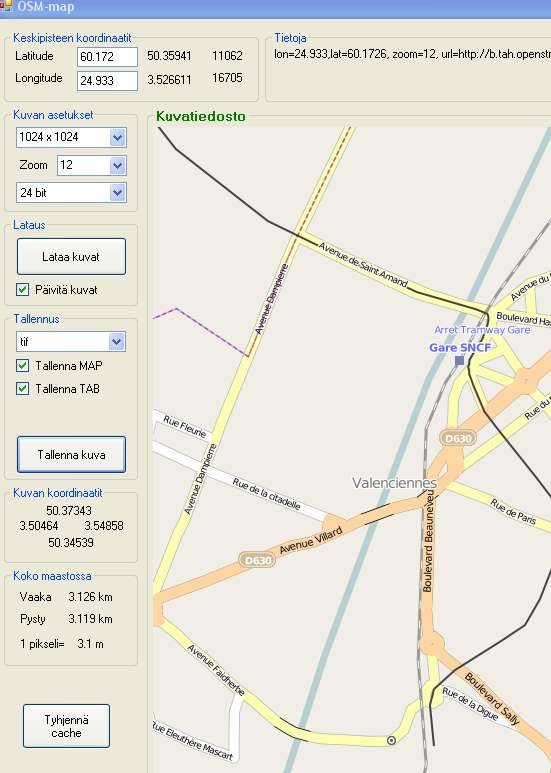 IrfanView is a free graphic tool that support many plug in (tiff/ecw). It can be downloaded here. 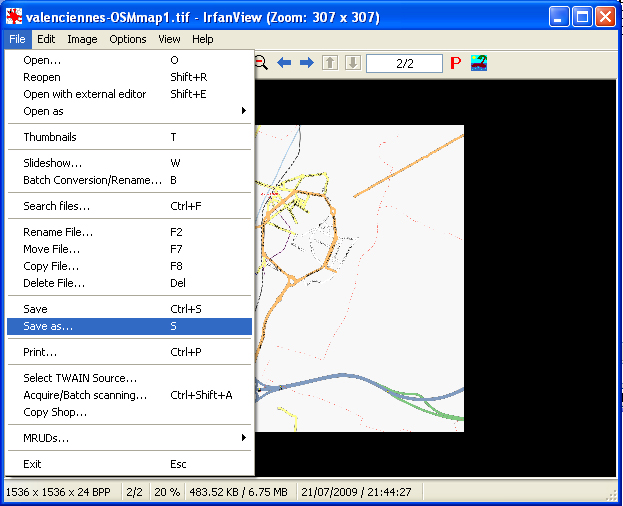 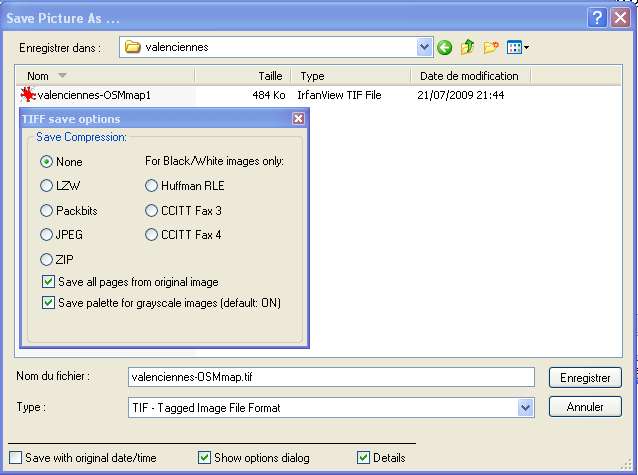 OSMtiledownloader is a .net 2.0 Windows application for downloading from OSM server tiles and calibration file (map/PGW) using a GPX track. Also tile stitching to make a large map for Ozi Explorer or other programs is possible.

Map creation tool is a web map server [5]that use many background map server to create a map file. See chapter '[Oziexplorer#extract_raster_from_map | extract raster from map] to know how to download BoudingBox raster from this map file. 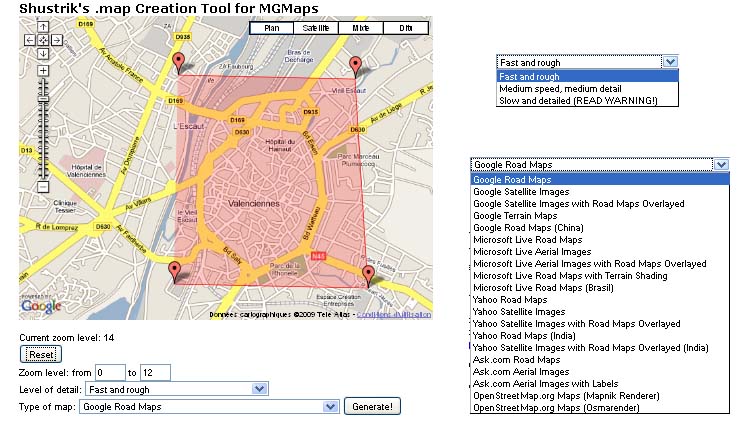 Manifold Gis system is a software that support import/export raster and vector data from gis server like virtual Earth ... but also OSM. Manifold is a gis professional example.

Manifold has an interface that Manifold user/programmer could use to implement access to GIS server. In this case the user must implement functions defined in the ISI. Some users implement it for accessing to OSM rasterized maps (made with Mapnik, Cloudmade, Osmarenderer...).

For Link (link for server import for local file) osm raster use the steps: 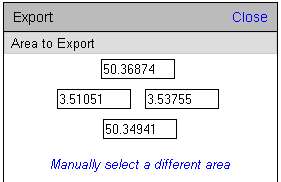 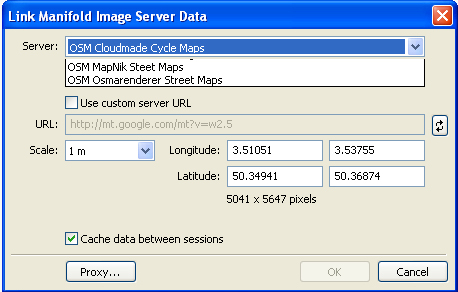 The best file to use for import in oziexplorer is a ecw with embedding projection information.

With Oziexplorer you can calibrate scanned pixel map, and show them. The normal vector data of osm can not be used directly into the Oziexplorer. But with the help of Importing Planet.osm into QGIS the OSM data can used as overlay.

An Perl-script is called "convert_osm2mif.pl" and can be found under Oziexplorer#Availability:

After this you could have e.g this picture: 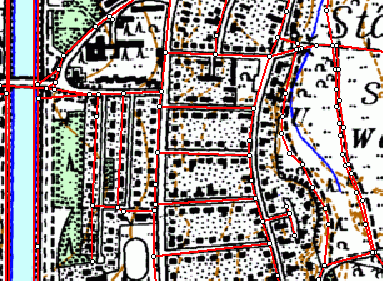 Now you can find such areas which have not been already mapped and you can set waypoint marks for your next bike trip with your Navi/Garmin.

Notice: Please don't use these waypoints directly in OSM. Please respect the copyright of the scanned map.

Convert OSM data into a pixel map with calibration (not maintained)

Please refer to the tiles@home version.

Both can download maps in different sizes (1024*1024 to 8192*8192) for an area of any size. For each map calibration files in the following formats can be produced:

This chapter could use tiff result from OMS-map but example extract map from ecw from manifold gis even other compatible raster file could be used. 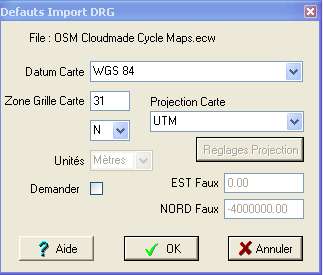 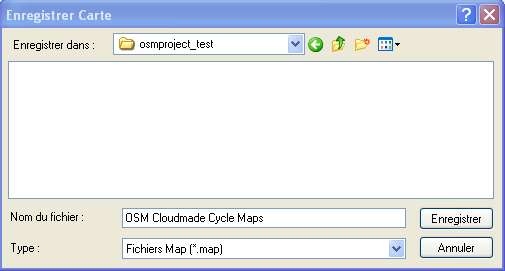 The calibrate raster file and calibration file could then use in mobile device for record lat/long to update OSM database. Some other software can also use this files after use some converter for have compatible file:

import in oziCE for tracking GPX

This tool is on oziexploerer web site and help user to make ozi file project compatible with ozi CE software . for example after use OSM-map for valenciennes we can use img2ozf to transform tiff file to ozf file extension 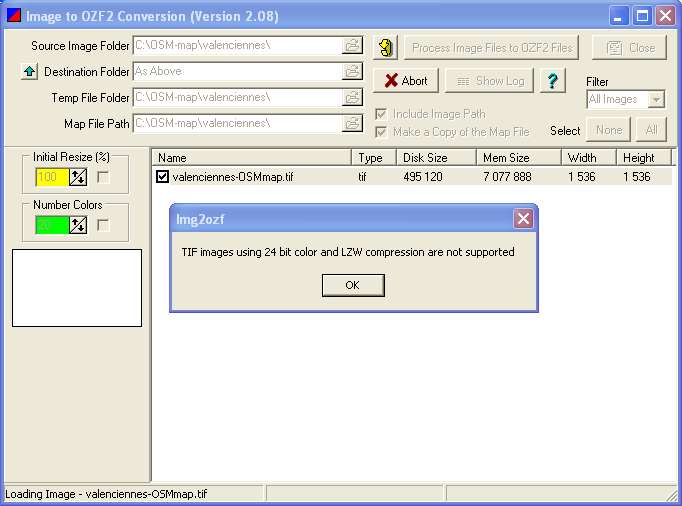 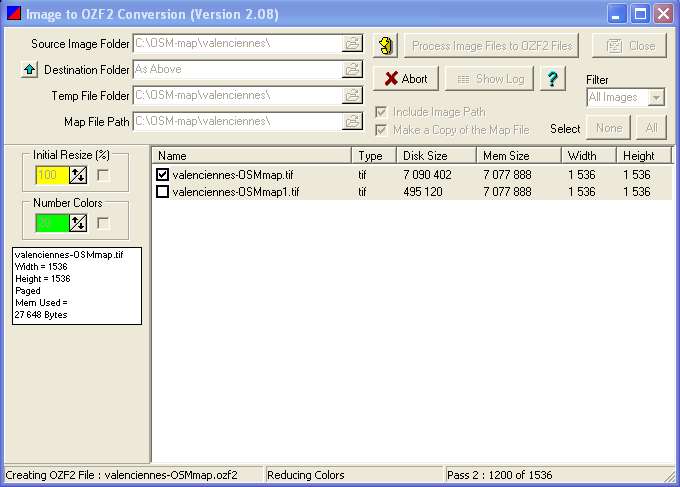 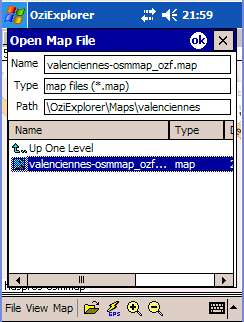 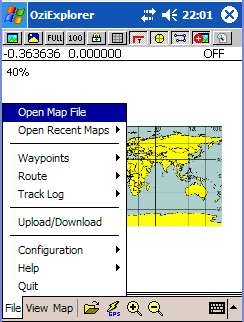 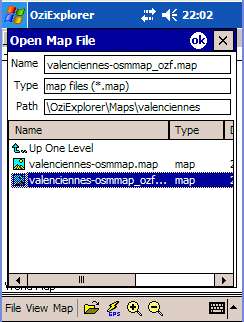 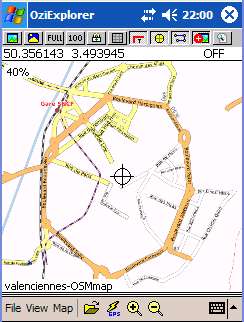 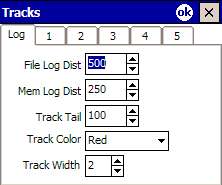 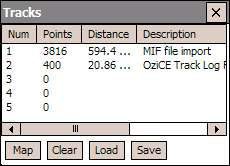 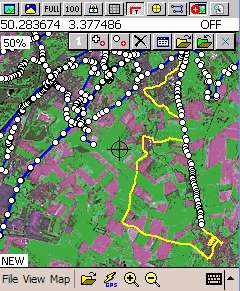 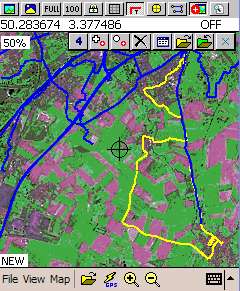 Oziexplorer CE record gps information in a plt file that must be convert to gpx. OSM support upload only gpx format for import. Here the list of the tool that can achieve this aim.

GPSBabel easily converts OziExplorerCE *.plt tracks to gpx. This format is used for upload gps information into osm (use osm for output).