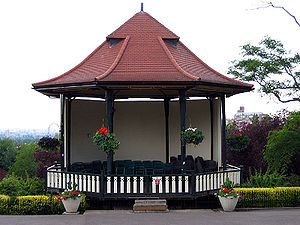 A bandstand is an example of a small outdoor venue. Bandstands are typically circular or semicircular structures that accommodate musical bands performing outdoor concerts, providing shelter from the weather for the musicians. This is a bandstand built in 1912 in London

A bandstand (in french : kiosque à musique) is a polygonal structure set in a public space, often a park, designed to accommodate musical bands to perform concerts. Most of them were built during the 19th and early 20th centuries. They can be found in many countries, mostly in Europe, North America and the Commonwealth.

People may need to find the place of a concert or public meeting. These buildings may also have a historical or architectural interest.

The "leisure = bandstand" tag is occasionally used , about 35 occurrences according to Taginfo (e. g. in Hyde Park, London). The aim of this proposal is to formalize this usage.

As of October 2013 there are a few other variants: