A structure that projects into a body of water to influence the current or tide or to protect a harbour or shoreline from storms or erosion. 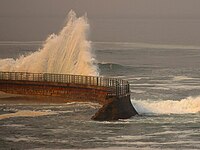 As proposer, I marginally favour man_made=breakwater but would like to see other opinions first.

I'd also invite comment on precisely what should be covered. My own opinion is that for practical mapping "jetty" should cover leisure, mooring and loading structures and that "breakwater" should cover structures built for protecting harbours and for preventing coastal erosion. I'd note though that some dictionary definitions include both as jetties.

I'd vote for this. Currently, I'm moving the coastline to conform to the shape of breakwaters, but this would be much nicer. I also favour the man_made variant. --KristianThy 10:41, 11 January 2007 (UTC)

This is definitely needed in my area. I would go with the man_made version, especially as we now have man_made=Pier. --Swampwallaby 23:11, 26 July 2007 (BST)

I'm in favor of this, again as man_made. Although the question of what's coastline and what's a breakwater should be thought about, as Fremantle harbor has made new land (including a breakwater) from dredged rock. TRS-80 11:10, 10 September 2007 (BST)

Of the 13 current waterway tags, 10 of them are man made, so I see no problem in adding breakwater to the list. I would like to see this key asap, either waterway or man_made would be fine. I would look at the current usage in planet.osm and use the most common. I know man_made=breakwater is already in use. --Swampwallaby 05:18, 7 January 2008 (UTC)

I think that Groynes (the things running perpendicular to beaches) need to be distinct from the walls around harbours. Groynes are very thin, and should probably be represented with a single line whereas breakwaters are pretty thick and would need an area in many places. Daveemtb 13:52, 10 January 2008 (UTC)

That is what I don't understand about this proposal. It is for a node, while breakwaters are large enough to qualify for linear or area (depending on size). --Cartinus 03:01, 20 January 2008 (UTC)

Seconded. Unlike breakwaters groynes are partially, if not completely submerged at high tide and whilst not visible could present a hazard to navigation. This may be important for some applications. Pishmishy 10:05, 6 August 2009 (UTC)

I agree with this proposal and believe it should be man_made, not a waterway. I also agree that the proposal should be for linear or area. The breakwaters surrounding the ports of Long Beach and Los Angeles in California are several miles (or km) long and are 50 ft (15 m) thick. This is definately more than a node point. California Bear 22:13, 19 September 2008 (UTC)

I agree that we need a breakwater tag. I prefer man_made. Breakwaters should be linear. Thick stucture can be marked with width or est_width. --Seawolff 22:55, 30 September 2008

I think we definitly need a breakwater tag. I prefer man_made, and would like to see it in a linear variant (for those things we call "Buhnen" in Germany) and an area variant for huge breakwaters. Latter should only be used if they are not ment (insteed of used ;-)) for access. Otherwise the old habit of changing the coastline is preferable, as it could be enriched with ways and pathes and access rules. So please change the proposal to include only man_made and add the usage as linear and area and not for a node. An additional attribute material=(wood, iron, concrete, tetrapods, stones, soil, unknown) would be nice, the attribute width for the linear form seems ok for me. --JND 08:29, 1 November 2008 (UTC)

I agree with the proposal, breakwaters are very common here where I live, in Southern Spain, and I can't tag them. Of course, I think man_made would be better. Keep in mind that a lot of them are not just a line of rocks in the water, but a long and wide place, sometimes used as a park; so it shpuld be a surface and not a lane or point. --Schumi4ever 16:30, 29 December 2008 (UTC)

I agree with this proposal, this kind of structures are also very common in Italy. However, I think that we could propose to use both line and surfaces to tag them, because some are very small, some others are very large or extensive. I think we should include them in waterway... --fradeve11 17:20, 29 January 2009 (UTC)

It looks like there is an overwhelming agreement for man_made=breakwater (i also agree) is it about time for a vote? I also think a photo would be appropriate (so everyone knows what were talking about). --acrosscanadatrails 23:48, 26 March 2009 (UTC)

The only reasonable usage is man_made=breakwater as it not always is in connection with waterways. Such include structures to reduce the force of waves on storm exposed roads and bridges, and enbankments to prevent erotion along rapid rivers. --Skippern 21:51, 26 June 2009 (UTC)

prefer man_made=breakwater also, as said, can (and here in hollland mostly does) exist without direct connection to navigation at water or shipping in general --Vussiewussie 21:30, 20 June 2010 (UTC)

The overview table above indicates it applies to nodes. It should actually only apply to ways, potentially with area=yes OlivierCroquette 13:32, 9 August 2010 (BST)

This is definitely needed. I prefer man_made=breakwater. I also agree with OlivierCroquette that it should apply to ways, not nodes. BTW, man_made=breakwater is now in use almost 3000 times. --Alester 21:53, 10 December 2011 (UTC)

I prefer man_made=breakwater. In my area in Norway we hardly have any piers due to the ruffness of weather on the coast. So this is absoloutely a must. - Torleiv 28. sept 12

Voting has not started. Opinion is requested first before the exact format is finalised. MikeCollinson 01:35, 3 December 2006 (UTC)