From OpenStreetMap Wiki
(Redirected from Width)
Jump to navigation Jump to search
Key:width - Other languages

The key width describes the actual width of a way or other feature. By default, values will be interpreted as metres. To reduce the risk of misunderstandings, or if the width should be specified in a different unit, the unit can be added to the end of the value, separated by a space (see #Examples). The value should always use the dot as decimal separator, if needed.

The source of the width information can be specified by source:width=*.

It is discouraged to specify values as, e.g., width=narrow or similar. See therefore this proposal.

If the width couldn't be exactly determined or is estimated, use the key est_width=* instead.

Often the values themselves are not specified correctly. The following table contains examples of incorrect tags and their correct notation.

Usually, the width=* tag for streets describes the width of the carriageway from curb to curb. This includes cycle lanes and any parking lanes if they are on the street but excludes anything beyond the curb like sidewalks or cycle paths. However, this definition was never explicitly documented on this wiki page but only mentioned at other places in the wiki until 2021. It also never clarified which width should be measured in the absence of curbs, especially on unpaved roads. So, due to the historical lack of a clear definition, data consumers should expect some fuzziness when interpreting this tag for streets. See this Sep 2020 thread from the tagging mailing list for a discussion about the ambiguity of this tag.

To avoid these ambiguities, some tags are in use to specify the width of individual elements that compromise a street:

The effective usable width of the carriageway (the width of the area on which vehicles move in flowing traffic) can be determined either from width:carriageway=* minus any existing parking lanes (see the parking:lane=* scheme) or from the use of width:lanes. width:effective=* is rarely used to specify this. However, with or without markings, relocated vehicles, etc. it is unclear where the exact limit for measuring the effective width is located.

Consider using est_width=* if you can only estimate the width.

It is possible to create a way in JOSM across the width of the feature, and this will show the estimated width at the bottom of the screen, see the figure for a demonstration: 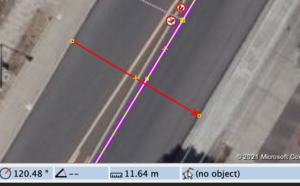 In this example, the red line across the road is a way which was created from kerb to kerb (the carriageway is asphalt and the kerbs are concrete), and JOSM estimated this as 11.64 meters.

Since version v41 StreetComplete can measure distances using your camera. This is only available on some devices.

The most accurate way to measure distances is using a tape measure or similar. There are also laser distance measure devices you can buy. You can also make use of a measurement app on your phone, but in that case, StreetComplete is recommended if using Android.