this seems to be obsoleted by the approval of barrier=* (=city_wall).

A linear feature for city walls. 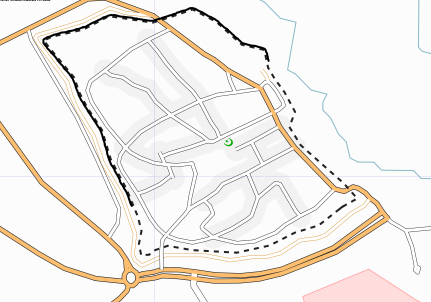 I'm not sure that a city wall must be a border. For example while London Wall may have been a border 200 years ago it isn't now (although I think the remaining sections are significant enough to be included in OSM.) Tjpayne 16:47, 9 March 2007 (UTC)

border refers to physical things, rather than political boundaries. Political boundaries are currently under the 'Place' key. London wall is still London 'wall' regardless of its current use. In places it still obstructs, and for that reason it is still a border, just like a fence, or a hedge. The tourism, and Place keys can go along side where necessary, but for just a wall, I think it's a border value. If a wall was no longer there at all, then maybe it would have to go under historic, assuming it was justified as being necessary to map.Ben. 00:11, 10 March 2007 (UTC)

My preference would be for man_made - if I go there, I expect to see something significant; border= would also work as defined as something physical, though I'm a bit uneasy that it will be confused with things like country boundaries. If the wall is also a political boundary, then the way can also be tagged appropriately. MikeCollinson 00:41, 18 March 2007 (UTC)

In the case of London, would there be any intent to show the line of the wall in areas where it no longer physically exists? If so, are you intending to differentiate? MikeCollinson 00:41, 18 March 2007 (UTC)

I could see the simple broken line indicating the parts where it used to exist. That is in the example drawing the upper left half would be the existing wall, the lower right half would be the destroyed/former location of the wall. --Hawke 23:53, 11 June 2007 (BST)

That makes sense to me ... we will need some extra tagging to indicate "former line of" city wall. I'm trying to think of an easy and logical way, any ideas? MikeCollinson 07:58, 4 January 2008 (UTC)

We could simply use border=former_city_wall, couldn't we?

From a different angle, what about other bits of wall? For example in Veralamium Park in St Albans there is a small bit of Roman Wall left standing (the locals demolished the rest to build the Cathedral ;-). It's hardly a border, but I've made it border=city_wall with historic=ruins and "name=Roman Wall" for now. TomChance 16:13, 21 March 2007 (UTC)

* It is "hardly a border" but it is in the physical sense, as you can't walk threw it, and it once was in the political sense, and thats why it was originally built. I would agree with those tags you used though. I agree that border and political borders may be confused, but I think thats just because of the multiple uses of the word in English, rather than border being the incorrect term to be used for physical dividing features. Ben. 19:45, 21 March 2007 (UTC)

It might be impossible for a renderer to distinguish which is the internal and which is the external side in case of incomplete / partially demolished city walls, so the proposed rendering can't do dashes on the inner side, solid line on the outer. I propose it is always rendered as solid line with a dashed line just above it (adjacent, on the northern side) --Stefanb 15:57, 12 June 2007 (BST)

I don´t think there is a need for wall direction tags. Just render a line with the dashed side thing allways at the right (or left, but allways the same). Then the side is just a matter of direction of the way. it doesen´t matter either, if is closed or not, it will work for both.--Sergionaranja 18:38, 31 July 2008 (UTC)

i think this tag should be merged to Proposed_features/barriers
--Sergionaranja 15:29, 16 September 2008 (UTC)

no way, it's far more than that. You are neglecting historical importance, in general they are of high cultural value, if they would just be barriers, you could also map all other things like buildings, rivers, whatever as barriers.
I like parts of the proposed rendering though. The thicker parts (rectangles) should not be rendered senseless but represent in general defense towers or similar structures of the wall (areas where the wall extents it's width). This could be a tag on nodes (at least as long as the structure isn't mapped as an area, which in most cases IMHO would make sense.) There are also gates still missing. Unless the wall is build on top of an embankment the tunnel is IMHO not the right representation (or say it like this: when there is no tunnel, that passes underneath the wall (what is theoretically possible), there should be a gate-solution).
-- Dieterdreist 20:15, 10 December 2008 (UTC)

You are getting emotional! We are just mapping objects and barrier is a good key to store that value in, the historical importance does not matter. Tag the wall with a Wikipedia-Link if it is important! --Phobie 21:11, 10 December 2008 (UTC)

I think youre missing the point. It's not about being emotional or sentimental but rather if we're talking about a streetmap or a general map database. Of course background articles and definitions/documentation are available on wikipedia (and I think intelligent linking would be nice), but a logical scheme, that is not limited to a "streetmap"-point-of-view, will help us to structure the data. Barrier is too generic if you comprise everything that hinders your movement, therefore I would prefer to limit it's use to traffic obstacles (where I don't count city walls in the first place). Dieterdreist 00:40, 11 December 2008 (UTC)

Barrier is for things built/created specifically and only to prohibit movement, not for any physical object. Barrier is generic, hence it's the key, the specifics are within the value. I see far less need for it in traffic obstacles as the most common versions such as hedges and fences. A city wall is a barrier, and maybe a tourist attraction also. I agree to your point that it's a streetmap or a general map database, and tagging a city wall as more than a barrier or tourist attraction would be seeing OSM as a visual encyclopaedia rather than a map, labelling the wall not relative to its status and place on the landscape, but for other reasons that don't really belong on a map. Manmade on the other hand is about as generic as you can get. I therefore agree to the merger proposal.Ben 11:02, 11 December 2008 (UTC)