Some restrictions do not apply universally, but are limited to certain vehicles, some days or even some times of the day. This proposal suggests a solution for tagging this.

Use this where a restriction only applies at certain times. The values should use the syntax defined for Key:opening_hours. 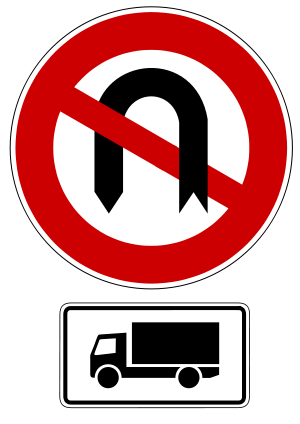 Use this where only certain modes of transport (only hgvs, only buses, ...) are affected. The values are those that can also be used as keys for Key:access#Transport_mode_restrictions.

Example: "no u turn" for heavy goods vehicles

If there is more than one "if" tag on the same relation, the restriction expressed by the relation is only active if all these "if" tags apply for the current situation.

Where can I use these tags?

For restrictions that are mapped as tags, this proposal cannot be used. Consider using Proposed features/Conditions for access tags instead.

There are other things that could affect whether a restriction applies or not. For example, the Conditions for access tags proposal includes special interest groups (such as forestry vehicles), darkness and wet roads. If someone finds an example for relations where these are needed, I'll add them to a sequel proposal.

Please use the talk page.

Please indicate whether you approve or oppose this tagging proposal. If you vote no, please also comment on the talk page and stay around for discussion so that there is a chance to improve the idea.

This is a factually incorrect statement. access tags are not defined to be used on restriction relations, and most of them would not even make sense in this context. Please clarify and discuss on the talk page. --Tordanik 11:53, 23 July 2011 (BST)