This proposal contains some extensions to existing access tagging. They all use an existing key (such as maxspeed and access), but append a condition, separated by a colon (":"). 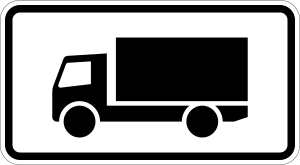 Any vehicle category (as listed on Key:access) is a possible condition. The access tag is then only valid for vehicles from that category.

(Note that this is different from lane-specific information: There are ways with direction-dependent restrictions that do not have multiple lanes. There also can be multiple lanes for each direction.)

Some existing tags could be expressed with conditions, for example

This proposal does not deprecate those widely used tags.

The following tags affected by this proposal depend on way direction:

Editors should include those tags in their way reversal safety checks.

Please use the talk page.

Please indicate whether you like the proposal (using {{Poll|yes}} or {{Poll|no}}). You can add a short comment, but please use the talk page where appropriate.

My understanding is that this restriction could be represented as a combination of hour_on:hgv=T1, hour_off:hgv=T2, and maxspeed:hgv=S with this system. The meaning of hour_on/hour_off is that the global restriction applies between the started times. By analogy, the qualified version means that the qualified restriction applies between the started times. Easy; see the example for bicycles. --achadwick 20:20, 21 February 2009 (UTC)

For those who want opening_hours syntax instead (and I'm one!): would you be happy with the term access_hours, and to allow qualifications like access_hours:psv=*? Calling the access times for a road "opening hours" sounds wrong to me as a native English speaker, "access times" has a better ring to it, and "access hours" seems like a good compromise that echoes the opening_hours=* name. --achadwick 20:18, 25 April 2011 (BST)