Shaded streets, footways, benches, bus stops, and other features are much more pleasant to use on a mid-summer day than similar features lacking shade. People often will forgo sitting on a bench at a bus stop in order to stand in the shade cast by the shelter roof if the sun angle places the bench in the sun. During winter, people may prefer to avoid shade and stand in the sun for warmth.

The purpose of this tag is to record whether a feature has shade during the heat of the day, so that the information can be used for routing. One of the developers of OpenTripPlanner has expressed interest in using shade as a routing criterion for walking, and thinks it it would take less than a dozen lines of code to do so.

The existence of shape also carries implicit information about the 3D structures of surrounding buildings or vegetation, and can therefore support QA and prioritisation of 3D mapping. Shade, its direction, and source is also visible in high resolution imagery, and therefore provides indirect remotely mappable information about object height.

This proposal starts from the premise that there are forms of shade for which covered=* and similar tags may be inappropriate, and that recording shade as an attribute of features that are shaded has the potential to be more practical than relying on high accuracy 3D mapping.

Shade changes over time depending on the position of the sun east-to-west during the day and above the horizon through the seasons (for calculation of position of the sun, see e.g. http://suncalc.net/). In the absence of 3D data, a place can still be described in terms of the directions from which it could be shaded at a given time of the year, indicating that there is an object of the right shape and height in that direction.

If shade is mapped for a specific time of day, the tag name will need to reflect it, e.g. summer_midday_shade. The risk of proliferation of other tags, e.g. winter_midday_shade would need to be considered.

Mapping direction of shade shares similar issues, e.g. presence of shade will typically still depend on the season.

As with lit=*, shade properties potentially vary at very fine spatial scale, but it is not typically appropriate to capture the full level of detail in Openstreetmap due to limits on precision of positions and angles. Mapped shade should be considered approximate. For example, small errors in directions and heights of distant objects can have a big influence on whether shade is actually observed. At the edge of shadows, small changes in length of shade over time may mean that shade is not observed. Shadows may also exist for only short periods of time, e.g. long shadows cast by short objects near sunrise and sunset. Shade should generally therefore be considered a property of existing objects rather than being explicitly mapped in detail. The tagging scheme should make it easier to specify that partial shade exists than it would be to (inaccurately) micro-map shade.

In Example 1, buildings cast shade on footways and bus stops. 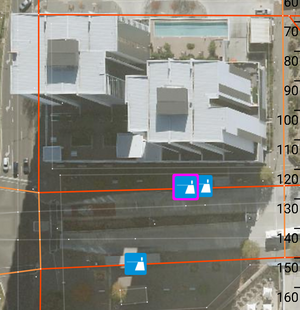 In Example 2, a playground is partially shaded. 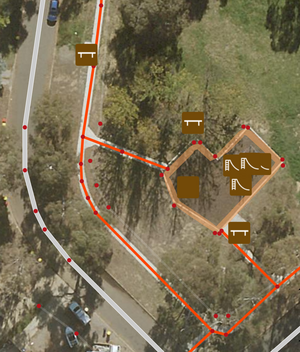 In Example 3, walking paths are partially shaded by trees. 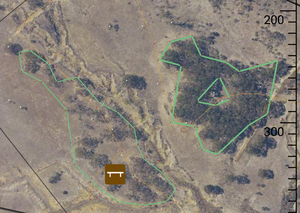 It is not anticipated that shade would be rendered in the main OpenStreetMap renderers, although specialized applications might do so.

Values related to type of object casting shade (from 2011). Summer midday shade was implied in this proposal and would need to be made explicit. Overlap with covered=* would also need to be discussed.