Two minor improvements for toilet tagging. Occupancy for all toilets and gender designation for toilets within a place.

Note: I use restroom and toilet room interchangeably. This also refers to WC/washroom.

Add tag for toilets intended for a single-occupancy or multiple-occupancy. This is information for how the space is designed for its occupants.

New tag for gender designation of toilets in shops/buildings/places

By gender designation it means what is the designated gender is for a particular restroom, so male/female/unisex. This is adding that to toilets that are already being tagged.

In some countries, having male and female toilets (or a single-stall unisex toilet) is the expectation due to laws or prevailing customs. In India, it seems providing public toilets for females is not the custom. So explicit tagging is very much a need for perhaps half the population there. Thus, some females avoid public toilets unless they are tagged female=yes.

Unisex restrooms can also provide a space for families and caregivers, especially when those people are of different genders.

Unisex restrooms are typically single-occupancy toilets, but in some places such as Japan and the USA there are multi-occupancy gender neutral restrooms. If some people want know about those, tagging can help them avoid/find those.

My motivation is have more information about toilets. This information is intended to benefit transgender, intersex, and gender non-conforming people in order to help them find toilets/restrooms/washrooms/WC that might possibly be safer. The 2015 U.S. Transgender Survey is a survey of the United States transgender population of experiences over a one year period (refer to pages 14-15). The findings were:

I presume that there may be similar issues experienced by transgender populations in other countries for public toilet access.

For governments that have laws that being transgender or gender non-conforming a criminal act, this proposal will do nothing to help these populations.

Possibly other populations that experience discrimination in access to toilets might benefit from more detailed public toilet information.

There are two types of restrooms that I am trying to create tagging scheme to capture:

In the US, laws are being created to forcing transgender people to use the restroom of their biological sex (usually determined by birth certificate), not their gender. This is currently a hot political issue.

In my opinion, the proposed tags adds information to the map and is useful beyond my own purposes and intent. I don't think this proposal on its own is political. (No more political that an more accurate inventory of restrooms should be.)

I am putting this in for completeness, not for sympathy and not for getting agreement.

For example, Target department store with male and female multi-occupancy toilets and a single-occupancy unisex toilets should be tagged in this manner:

Gender designation of toilets within places

Places includes shops, buildings, and other such establishments tagged toilets=yes.

These tag provides gender designation of toilets within a place.

These tags are intended to work in the same manner as the tags male=*, female=*, and unisex=*.

The toilets:for: namespace leaves open the possibility for a later proposal to add restrooms intended for specific populations not based on gender.

Some toilets have different facilities for different designated restrooms. This will work in a similar manner to Key:parking:lane parking:lane deals with sides of the street.

The format of this is toilets-tag:group - group is the gender or group designated for a restroom

ALSO ACCEPTABLE if there are only a male and female restrooms:

This item will make programming (and cartography?) for toilets a little more complicated. On the other hand, this allows for more detailed information to be kept.

These are newly proposed tags:

I discussed repurposing capacity=* in the tagging discussion in order for it to mean the number of people intended for toilets seated/urinals to be served at any given time. This would include adding the new tags for toilets:capacity:male/female/unisex for number of toilets in a place. There are a number of drawbacks. When there is more than one gender designated toilets the meaing of toilet:capacity is ambigous. However, the gender designation suffix would remove most of the ambiguity. Once you get to a large number of toilets, many mappers will omit counting. This tagging can oftentimes hide single stall toilets. For example, if there are 3 single-stall toilets then capacity=3. Another example of that is a single-stall toilet (capacity=1) and multi-stall toilets (capacity=3), and when those are summed you come up with capacity=4. Still, this might be a useful tag if guided correctly.

Post from 2013 about using the capacity tag in that manner.

Also, toilets:number=* the tag currently has about 10k entries, this tag seems to mainly be used in postions of Africa. I'm not to sure how that is being used. About 4k, toilets:number=0, which I assume toilets=no is the preferable way to tag that there is not a public toilet when you expect there to be one. If that is even what that tagging means.

A step beyond the idea of capacity/county is that some want to be able to count the number of urinals, seated, squated. Perhaps a farther brakedown of toilets:capacity:urinal:male=* and toilets:capacity:seated:male=*, which if present toilets:capacity:male=* should be the sum of those "position" tags. This is outside my proposal interest.

In my opinion, Family Restrooms are a different kind of unisex restroom designed for multiple people (an opposite sex parent and young child child or a patient-care giver) to be able to enter the same restroom and have facilities that better serve. Perhaps this should be tagged with toilets:for:family=yes and toilets:occupancy:family=family. Or, it could be toilets:for:unisex=yes and toilets:occupancy:unisex=family. This would be a perhaps new idea of "family-occupany" for a restroom intend to accomodate a single family group. I don't really have enough feedback (or enough understanding of how toilets:occupancy=* should work) to be proposing that.

Most restrooms should have a designated gender. Portable toilets are usually unisex. There are probably exceptions somewhere in the world (and the backwoods.)

Less than 15% of amenity=toilets are given a gender designation. It is probably fewer due to some being tagged some combination of tags for male=yes, female=yes, and unisex=yes.

New tags could possibly add to the use of the toilets=yes tag.

There are no proposed changes to default openstreetmap-carto rendering and these notes are NOT applicable to a general base map. They only apply to symbology for map narrowly focused on restrooms/water closets/toilet rooms. There has been no effort to make this work within Mapnik or any other software for that matter. 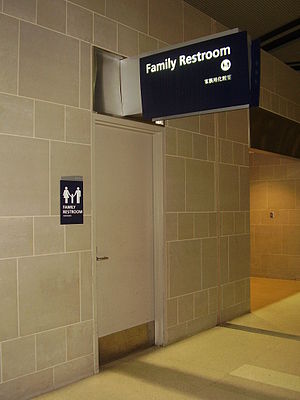 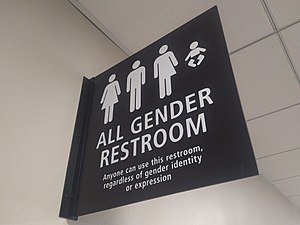 The stick figure male and female are nearly universal symbols for restroom. openstreetmap-carto currently does a similar rendering

Typically, unisex restrooms are also signed with the same male beside female stick figure. Using those same concept causes some small problems. Are you trying to communicate that there are separate male and female restrooms or are you saying there is a unisex restroom? Most maps are somewhat ambiguous.

In the US, there has been a movement to try to figure out how to sign unisex designated restrooms in a way that is different from the male/female stick figure. Is there a way to include people who transgender or another gender entirely outside male/female?

Unisex restrooms are also go by the terms "Gender Neutral", "All Gender", "Gender Inclusive", "Family Restroom", or "Co-Ed Washroom". Sometimes it is simply labeled "Toilet" or "Restroom". Less politically correct design designate the gender as "Whatever".

Note that: Some unisex restrooms were formally gender designated. So, some may include urinals. Having urinals may be a part of the sign giving users the option of which restroom to go in.

Recommendation: The half male/half female (Gender Neutral) icon seems to be the best available icon for unisex restroom. If you want to show single-stall unisex restrooms, perhaps use the Family Restroom Icon. Perhaps the toilet icon is used when there is no gender specified.

One idea is to use Unicode font with these symbols and generate a text label for the points. One could create their own font from [DejaVu Sans] and fill in any missing characters. Another, perhaps easier, idea would be to just use the SVG/PNG symbols.

This could possibly be adapted to toilet:occupacy=* tag.

On signage a wheelchair icon is may added to a restroom that is designed to be handicap accessible.

It is usually added to the right of the gender designation, but the symbol is usually somewhere nearby.