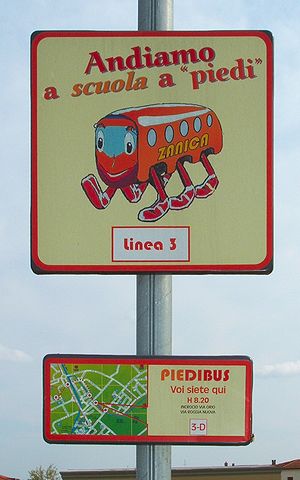 Example of a walking bus stop in Italy at Zanica (Italy). With some info about the line and the stop time

One example could be the city of Milan with is service that reach 57 primary school in the city, with 88 line and more than 600 children that use it. For every line there are more or less 4 stop for a total number of more than 350 stops only in Milan. There are some data about the result of the year 2015 on the site (in Italian) of the municipality of Milan.

After the discussion about the fact that the walking school bus is not like a public transport the propose went to tag it like an amenity, in the subcategory transportation, like a stop for taxi ( tag : amenity=taxi ).

Adding also the recommended tag use for stops.

It will applies to the node where there is a pole with the signal that describe the stop of the walking bus, like in the image above.

Could be use a icon similar to the bus station, but with a walking man like for pedestrian crossing