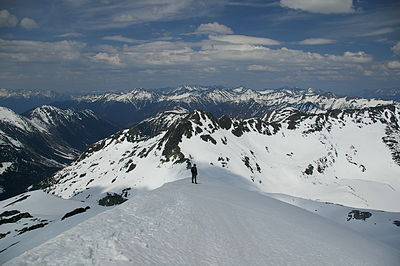 A tourist on a mountain ridge

Add a value to indicate ridges on the map.

Mountain and even hill ridges are very distinct terrain features that are visible from big distances and are an excellent reference when orienteering in the field. Ridges are often used as an administrative border.

Ridges also have names, which are used colloquially. This is relevant geographical information which lets you talk in terms of ridges names rather than of "that hill behind this village". Hence, it should be mapped. The only reason it can't yet be is the absense of a relevant tag.

This map shows big and small ridges joining one another. http://www.altaitravel.ru/images/maps/500000/b4-big.jpg

Here's a region near Teletskoye lake where I have already drawn some ridges and tagged them. Show the data layer to see them.

Lines, since ridges are essentially lines.

It makes very little sense to indicate ridges as points: if someone crossed a ridge and has deducted that place from a GPS track, he may want to indicate it as a point, but the approach should be just the same as with power lines: draw a line that crosses the track. If we let ridges be points, there will be a lot of garbage points in the db that make noise but don't help in orienteering.

Ridges shouldn't be areas: many ridges join one another forming tree-like structures, and it's too hard to tell one from another there, and doesn't help in orienteering in the field. Refer to elevation lines if you need areas.

For large groups of mountains, like Cordilleras, Urals or Tibet, I suggest it's better to make another tag, natural=mountain_massif, applied to areas only.

Only its name in italic should be displayed, like in this map. Font size and scale range should depend on the length of the way. Thus, long ridges must be visible in very low scales (many km in a cm), while shorter ones should be visible at bigger scale only.

Even though one can deduct ridges from elevation contours, a ridge is perceived as a line. Thus, if there's no elevation info in the map (like in the default OSM tiles), it can be drawn as a line imitating a shade of mountains, but not too prominent, to not be confused with real-world features.

As I am already using natural=ridge I would welcome it to become official. I would love to see some more graphic representation than just an italic font, though. -MerDi

I have been using it already too. As to representation, I think that an italic font is ok, but the label should span the entire ridge. --Fkv 09:32, 14 December 2011 (UTC)

I also think this is a good thing to tag. Although in principle you can derive ridgelines from a DEM, in practice DEM's like SRTM and ASTER are only 15-30 m/pixel and they are somewhat noisy even at that scale. Good imagery or a GPS track of someone walking along the ridgeline can produce a much more detailed ridgeline map. This is important to hikers/bikers (does a road cross over a ridge, or pass along beside it), and can be used to actually improve DEM data by upsampling the data to something like 5 m/pixel and then using the ridgeline read in from OSM to "force" the highest points in the new upsampled DEM. Contour lines drawn from this new DEM would then be parallel to the ridgeline and more importantly, the line will be exactly where it should be, leaving no ambiguity in whether roads/trails cross ridges, etc. This is also useful in the far northen parts of the world where DEM models are practically nonexistent.

One other detail we should look at is the direction of ridgelines. One possibility would be to do them like streams and run along the ridgeline in the downhill direction. This way mountain peaks formed by the confluence of 2 or more ridges end up looking like a "star" with the ridges radiating outwards. For ridges which don't change elevation as they run the direction wouldn't matter. A better method would probably be to include the elevation (if known) on the individual nodes along the way for which it is known (if there are any). -AndrewBuck 22:22, 8 November 2011 (UTC)

First of all, we need the tags natural=ridge/valley/etc in order to be able to set their name=*. We shouldn't care about direction, because this would be too messy. A ridge can go up and down many times (over foresummits and backslide peaks(?, german: Vorgipfel, Rückfallkuppen)), or even be horizontal. Sooner or later, laser-scan based DEMs will become available for OSM-based maps anyway. --Fkv 09:32, 14 December 2011 (UTC)

If we include ridges, then we should at the same time, get all other mountain features that can be found in classic topographic maps, but not yet standardized for OSM into the proposal.

I agree. Why make a dozen of separate proposals, when we can do it with one? I'd like to add:

Well I've never seen a map showing a valley. A valley is not easy to map, cause there is no real definition (both in theory as in the map) where it starts and ends. If you can come up with a proposal on how to map a valley then it could be considered. Usually one maps everything but the valley, and the valley is defined by the other mountain features and contourlines --Extremecarver 10:38, 14 December 2011 (UTC)

A map does not need to show signatures for ridges or valleys, but it should show their names. I have never seen a hiking map which does NOT show any valley names. Just go to www.amap.at and search for "Großer Geyergraben", for instance. You'll find a couple of valley names around there (Großer Geyergraben, Wurzelgraben, Grillenbergtal, Zobelgraben, Schustergraben). In order to have a valley name spanned along the whole valley, we need to map it as a way. Of course it is not always possible to define the start and end of a valley exactly. In some cases we need to listen to our feelings. It's the same as mapping a peak on an even plateau. --Fkv 17:03, 14 December 2011 (UTC)

I find natural=saddle (for marking saddle points) very important. Saddle points are as important as mountain peaks. Both are commonly used for marking borders (of states etc.). Note that there is a difference between saddle points and mountain passes (see Key:mountain_pass). --Gauß 13:13, 25 January 2012 (UTC)