This is a proposal for a new relation to describe a routing situation whereby at a junction the way layout is ambiguous or local conditions make it impossible for routing software to reliably determine whether a turn direction is needed. This proposal will remove this by providing the extra information needed at such junctions.

Currently any routing software based on OSM data has the limitation that in some circumstances turn directions will not be given when they should be, or will be given when they are not needed. This is obviously frustrating to the end user and creates a bad impression of the data as being incorrect when it is actually correct it is simply that the way layout is such that routing software cannot automatically, reliably determine whether turn directions are necessary at a junction. The proposed through_route relation removes this inaccuracy

Consider this situation. If you are heading north on the A56 and want to continue on the A56 then you need to turn off the main carriageway or you end up on the A682. Currently any routing software based on OSM data will not tell you to make a left turn and consequently you end up travelling on the wrong road to the wrong destination. There are hundreds of similar situations throughout the UK and Western Europe (and presumably globally) ranging from major highways to much smaller residential streets. The term TOTSO to describe this is already used in the UK, Netherlands and Germany (Wikipedia).

It says follow A56 - and if you do that, you will turn off to stay on the right road according to signage.

This new relation (type through_route) specifies which 2 ways are the "through route" at a junction i.e. which way local conditions dictate that the way continues. The relation requires 2 ways (no role required) and a node with role = junction. It should only be used at those junctions where the through route cannot be reliably inferred from other information. Using the junction above this would have the following

By tagging the junction in this way routing software can now be made aware that in order to continue on the A58 a left turn is needed and similarly that to proceed onto the A682 no direction is needed as this is the through_route.

This proposal is not concerned with priority/yielding/give way or any other similar mechanism it is about alerting routing software to the through_route when this is ambiguous.

I believe that this proposal was originally mentioned on OSM IRC approximately 3 years ago and as a result of this the relation is already currently in use but not documented. The junction mentioned above is an example of the relation in use. Taginfo shows that this relation has seen limited use already but this is most likely to be due to the undocumented nature of the relation. This has no effect on renderers but obviously routing software would need to be made aware of the relation in order for the improvements in routing directions to be realised

Please use this page for any comments. If possible please give real-world examples of the situation you are describing. They say that a picture paints a thousand words.

You should read the proposals before writing such stupid remarks. A junction is a junction. And here we have a routing problem through a junction. --Pieren (talk) 14:33, 29 May 2013 (UTC)

Pieren, so you propose resurrecting? a long dead proposal from 5 years ago...2008 that hasn't even been even attempted to be RFCd (presumably because it isn't good enough/ready yet/too complex already) to make it bigger and more complex rather than getting this simple change through?
The junction proposal is a different thing and 95% not needed as it most of those junction can be done via existing methods happily. I don't think that would ever get through an approval process anyway - I would not vote for it for one.
'If' you linked to a current active proposal or existing appproved element in the wiki that I would back you but you are not. You are linking to something the doesn't exist and say approve that.
That is not the best way of getting more needed information added to the OSM. Rovastar (talk) 22:52, 29 May 2013 (UTC)

I think *you* should think through and understand the difference between routing and navigation. The routing decision may or may not be influenced by this tagging (possibly a small penalty for turning off at a junction) but the navigation (translating the route into directions for a human to follow) can be made more appropriate and less ambiguous in a way which simply cannot be derived from the geometry alone. --Csmale (talk) 17:41, 1 June 2013 (UTC)

the possibility of using the lanes tagging has already been discussed and dismissed as it does not fit this case. There are multiple possible destinations in the given example so I don't see how this would work and there is no trunk_link as this is a junction of trunk roads. Thanks --Pointdee (talk) 21:47, 4 June 2013 (UTC). The discussion on lanes has been updated by me. I miss the point why turn:lanes=* and destination=* should not be used in this case. --It's so funny (talk) 21:39, 5 June 2013 (UTC)

Some of the comments mention that the documentation for the the proposal needs improving. I will try to add to the proposal below.

I'm happy to bring this in line with other similar relations and use via instead of junction for the node but was trying to avoid reworking what has already been done Taginfo. Maybe someone with skills greater than mine can update those already in use .

My artwork skills are not as good as some on the wiki but nevertheless consider the junction given above (link) which is involved in routing from Ramsbottom to Huncoat as shown at OSRM. If you follow the directions given at OSRM you will miss the left turn at the junction in the example because as you can see there is no direction to turn left. This means that you will most likely end up in Rawtenstall. The situation on the road is as shown below 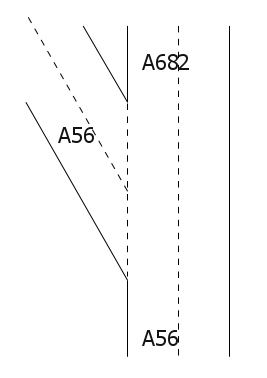 If you are heading north on the A56 there are two lanes. Both these lanes continue north and become the A682 at the point of the junction. There are no road markings to indicate that the left hand lane is a deceleration lane or that it is to be used exclusively for those turning left. In fact road markings show that the left hand lane is for both straight on and turning left (BingSat). Additionally none of the roads involved are trunk_link roads. In this situation routing software cannot determine that in order to continue on the A56 you need to make a left turn as the software will (incorrectly) determine that the A56 is a continuous carriageway which in reality it is not. Marking the junction with a through_route relation removes this problem.

This is not a fault in the routing software and is not limited to OSM based data as Google also gets the same junction wrong in the same way. The problem is that the situation on the ground cannot be reliably determined just from the way data in a similar way that routing software cannot reliably determine that it is not permitted to use a left/right turn at certain junctions hence the existence of the no_left_turn, no_right_turn etc relations which are accepted and widely used.--Pointdee (talk) 18:41, 6 June 2013 (UTC)