This tag is proposed to describe the area of the riverbed together with other optional tags defining the Landcover. As most rivers have fluctuating water levels this area would be typically larger than the area defined by riverbanks and encompass the whole area that is regularly flooded and visibly formed by the river.

In short - there are notable geographic features visible with the naked eye from the outer space that we do not (yet) map. This feature should be useful for rivers with large temporal fluctuations of water flow and a discernible riverbed visibly larger than the normal area covered by the river such as the Isar around the Sylvenstein reservoir, the Maggia around Giumaglio and Someo, as well as desert streams.

natural=riverbed has been in modest and inconsistent use for some time, the main problem with it was that the largest (-taginfo) count of it came from a single import with questionable semantics. This proposal wants to improve upon it in non-revolutionary way. We choose waterway=* as main tag as it is a more natural choice for water related features and easier to combine with natural=* areas encompassed by the waterbed. Using a new tag rather then modifying or redefining natural=riverbed makes it easier to achieve a clean and consistent definition.

The definition of the riverbed area is now backed by an academic reference which seems to be in good accordance with the intuition.

This proposal defines semantics for the special case of natural=* areas inside riverbeds as well as waterway=riverbed overlapping areas of waterway=riverbank or natural=water.

Draw the riverbed as an area covering the complete area of the riverbed and river and tag with waterway=riverbed with optional landcover tags describing predominant appearance if/where not flooded. Long riverbeds should be split, mapped separately and joined in an analogue way how it is done with riverbanks areas - with or without the use multipolygons.

It is assumed that most riverbeds will have a surface similar to natural=shingle and this could be a default property of riverbed (not decided yet).

Islands (areas which are never flooded and distinct from the river bed) can be mapped with multipolygon/inner. In contrast to this vegetation patches and other natural areas within the riverbed that are not true islands should be mapped as areas not part of a multipolygon relation with it. 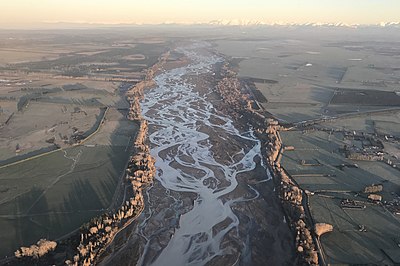 Riverbeds can have attributes, values can be either those proposed by Rosgen (usualy "Aa+"-"G") or verbose (also multivalued). In some cases some of the attributes could be derived from detailed mapping of river geometry and other information but it many cases it may be more practical to specify this attributes.

The definition of the riverbed area

In practice - map what looks to you like a riverbed!

The academic definition of riverbed area used here is "flood prone area" as illustrated in Fig 1./Section 4.1 "A classification of natural rivers" by D.L. Rosgen (see References) and used in subsequent literature and field guides based upon it.

In practice, there are easy cases where almost everyone will agree how to draw the riverbed area and difficult cases where no amount of academic literature and discussion will achieve a perfect conclusion. That should not prevent us from practical mapping!

What waterway=riverbed is not supposed to be: despite naming it as "flood prone" area by Rosgen, this tag is probably not the right one to map flooding hazards!

Riverbeds are areas prone to be flooded and visibly formed by a river flow.

The riverbed covers the whole area except for areas excluded as multipolygon/inner which are defined as islands in the riverbed and not flooded except on extreme occasions.

The river - where defined by riverbanks covers the riverbed.

Where the river is defined only as waterway=river a fuzzy and highly variable river flow may be assumed.

natural=* and similar may define particular properties (rock, vegetation) of areas within the riverbed.

The riverbed area could be rendered with faint blue circles or similar superimposed to the surface indicating that it is occasionally flooded. riverbed:type could be used to render the "ground" surface as a variant of bare_rock or or shingles.

The water flow and some natural=*, landcover=* and surface=* values are already rendered (sand, pebbles, bare_rock, mud, shingles, scrub etc). When support is improved these could be shaded to indicate that they are part of a riverbed and subject to frequent changes and sometimes flooding.

natural=riverbed has been previously used by several mappers, however the usage was inconsistent. Using "waterway" seems more logical than "natural" with this proposed definition.

Some mappers are approximating this feature by mapping temporarily dry areas of the riverbed as waterway=riverbank + intermittent=yes. This proposal should make this easier and clearer, also improving the possibility to map the surface and other properties of the temporarily dry areas.