From OpenStreetMap Wiki
(Redirected from Role:west)
Jump to navigation Jump to search
Route directions - Other languages

This article is about cardinal directions associated with numbered routes. For turn-by-turn directions, see Routing. 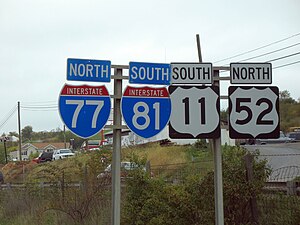 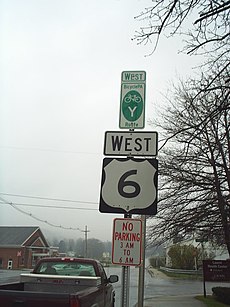 Some bicycle route networks are signposted with cardinal directions in the same manner as road routes. 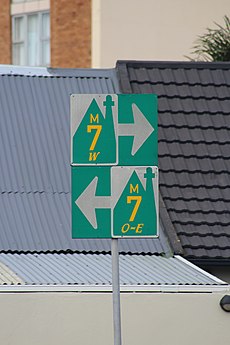 In several countries, a road route is typically considered to travel north–south or west–east.[1] Cardinal directions accompany route shields on all signage, including reassurance markers and guide signs. In everyday speech, people refer to the "westbound" or "eastbound" lanes of a road. This usage has also carried over to bicycle routes in many areas. The following countries are known to associate cardinal directions with routes:

In these countries, the cardinal direction is an intrinsic property of (one side of) the route. It is not a destination (as in some Vienna Convention countries), and it is not necessarily the actual direction that every stretch of road along the route travels. For example, if a road carrying a north–south route curves briefly, the signs keep saying "North" and "South"; they do not switch to saying "West" and "East" at the curve. A route that has a directional suffix in its number, such as Interstate 35W, still has two route directions associated with it, i.e., "I-35W North".

Cardinal directions rarely appear on rendered maps, where a single shield would represent both directions of a route at once. However, users do expect cardinal directions to be included in guidance instructions during turn-by-turn navigation.

There are two ways to map route directions.

One relation per direction

The most robust approach is to create three type=route relations:

direction=* is always set to an English value in lowercase, even in French-speaking parts of Canada and Spanish-speaking Puerto Rico.

This approach has several advantages:

Unfortunately, JOSM assigns the same label to all three relations, making it difficult to select the correct one from a list. As a workaround for this editor limitation, it is common to set name=* to a human-readable name with a disambiguating suffix, for example State Route 10 (south).

iD currently does not have a field for the cardinal direction on a road route, but you can set direction=* using the raw tag editor. [1]

One relation per direction per leg

A route may already have child relations representing "legs" of the route. For example:

In these cases, there needs to be a separate relation per direction per leg. It is unclear whether the superrelation's members need to be sorted. For example:

Some routes are even organized into an intermediate level of relations for the legs. For example, here is the hierarchy for Clark County Route 215, which is shaped like the letter C:

The alternative approach is to keep the whole route as a single bidirectional relation and use the role of each member way to indicate the cardinal direction along that way. [2] For example, in Ohio State Route 562

Ohio State Route 562, each member way has either

east as its role in the relation. The role is always set to an English value in lowercase, even in French-speaking parts of Canada and Spanish-speaking Puerto Rico.

This approach was recommended for many years in the U.S. community. As of 2017, 75% of Interstate route relations had cardinal directions as member roles. [3] Historically, tagging cardinal directions was only considered necessary along divided highways. For a route that mainly traverses undivided highways except for a brief divided segment, tagging a role on a few ways is much more convenient than adding every way to two relations.

Unfortunately, this approach conflicts with other uses of relation roles, especially

backward, which indicate that a two-way road carries the route in only one direction:

Moreover, because editors and quality assurance tools do not widely support cardinal directions as roles, they sometimes become inconsistent and broken as roads and relations get edited over time.

In French-speaking parts of Canada, the cardinal direction is tagged in French, while in Puerto Rico, it is tagged in Spanish. As of 2021, destinations with route directions are not tagged in a more structured form, so data consumers must take care to parse destination:ref=* in English, French, or Spanish, depending on the region.

OSRM and Valhalla include cardinal directions in turn instructions based on direction=*, destination:ref=*, or relation roles, whichever is present.