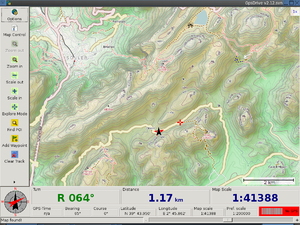 The Shuttle Radar Topography Mission (SRTM) (Wikipedia article) is a NASA mission conducted in 2000 to obtain elevation data for most of the world. It is the current dataset of choice for digital elevation model (DEM) data since it has a fairly high resolution (1 arc-second, or around 25 meters), has near-global coverage (from 56°S to 60°N), and is in the public domain.

Many OpenStreetMap-based projects use SRTM data to provide topography information, relief shading, and elevation profiles for trails and routes. An example is the OpenCycleMap rendering which shows contours and relief shading derived from SRTM data.

There are three versions of the official SRTM dataː

On 22nd February 2016 custserv@usgs.gov confirmed that they NO LONGER SUPPORT direct downloading of data from these directories. You must use either the Bulk Download Application, the File List Ordering option, or EarthExplorer[note 1].

A few other projects have post-processed the official Version 2.1 data to fill in the data voids and in some cases improves accuracy or resolution in some places. The two known projects that covers the whole world are:

In addition, since 25 May 2011, the German Aerospace Center ("Deutsches Zentrum für Luft- und Raumfahrt") also offers SRTM-based data (SRTM X-SAR) that is more accurate than SRTM but only covers 40% of the world and is free for scientific use only].

The official 3-arc-second and 1-arc-second data for versions 2.1 and 3.0 are divided into 1°×1° data tiles. The tiles are distributed as zip files containing HGT files labeled with the coordinate of the southwest cell. For example, the file N20E100.hgt contains data from 20°N to 21°N and from 100°E to 101°E inclusive.

Recent versions of GDAL support the HGT files natively (as long as you don't rename the files; the names they come with are the source of their georeferencing), but the srtm_generate_hdr.sh script can also be used to create a GeoTIFF from the HGT zip files. (Note that the script has SRTM3 values hardcoded; if you're using SRTM1, you'll have to change the number of rows and columns to 3601, the number of row bytes to 7202, and the pixel dimensions to 0.000277777777778.)

The Hochschule für Technik Stuttgart has converted contours calculated from SRTM data to OSM format (XML) and has it ready for download at [2]
The lines have the tags contour=elevation + contour_ext=elevation_minor every 40m + contour_ext=elevation_major every 1000m + ele=nn (elevation_medium is not used)
NB. This data use OSM Protocol Version 0.5, which was deprecated in 2009. Newer software/editors might not be able to use these files.


You can also do a manual conversion to OSM format using:

other Tools that are using SRTM data: