From OpenStreetMap Wiki
Jump to navigation Jump to search
Tag:barrier=embankment - Other languages

This feature has been labeled as deprecated. The recommended replacement is: tag:man_made=embankment.
The reason is documented in Deprecated features. You are still free to continue to use or interpret this tag as you see fit since OpenStreetMap does not have “banned features”.
Under no circumstances should you (semi-)automatically change “deprecated” tags to something else in the database on a large scale without conforming to the automated edits code of conduct. Any such change will be reverted.

barrier=embankment is sometimes used to map a slope or steep incline. This tag was not documented prior to 4/2019. Most features with this tag were imported into the database in 2011, before man_made=embankment was an established tag. 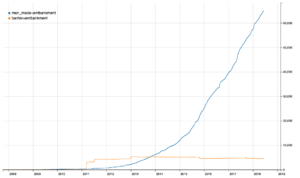