From OpenStreetMap Wiki
Jump to navigation Jump to search
Tag:barrier=turnstile - Other languages

turnstile (also called baffle gate) is used to allow one person at a time to pass. Use this for small turnstiles like the ones in supermarkets or some subways. 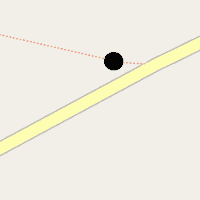 Simply add the tag barrier=turnstile to the node where the stile is located.

Where there is a turnstile where a footpath and a road join, do not place a stile at the junction, but at a node on the footpath:

Also used for tagging some doors/gates/barriers where you validate your ticket, see Tag:railway=subway_entrance.