From OpenStreetMap Wiki
Jump to navigation Jump to search
Tag:building=semi - Other languages

Semi-detached houses are the most common type of house in the United Kingdom, but are also found throughout the world. They consist of a pair of houses sharing a common wall (the party wall) and usually have an identical layout which is a mirror of the other half. Semis can vary in size from small houses built for social housing (2 bedroom, 1 living room) to vast Victorian villas with 6 or more bedrooms spread over 3 or more floors.

In Britain, semis usually have 2 floors, but semi-detached bungalows are common in some areas. It is not clear whether the semi tag or building=bungalow should be preferred in this case: indeed, perhaps building=bungalow_semi may be a suitable alternative.

There are a number of synonyms for this tag (see listing below). The only one with widespread usage is building=semidetached_house which has more than twice the number of tagged elements compared with building=semi, and is spread a bit more over the world. See the taginfo map:

building=semi has been in use longer (see below), and probably accords better with standard usage in Britain, but it may be non-obvious to mappers from outside English-speaking areas where the term is commonly used. 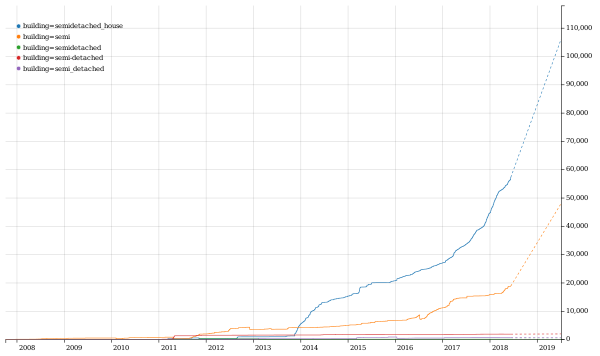