From OpenStreetMap Wiki
Jump to navigation Jump to search
Tag:man made=cross - Other languages 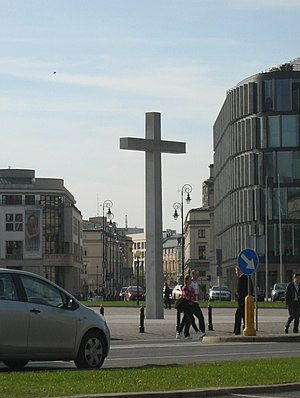 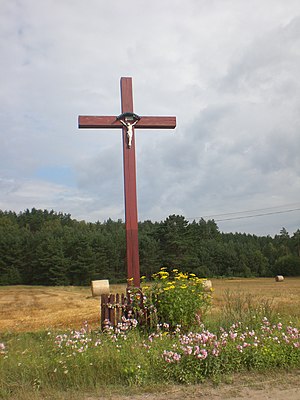 other example of wayside cross that is not historic, it may be tagged as man_made=cross

The tag man_made=cross is used to mapping crosses. Especially useful for mapping ones not qualifying for historic=wayside_cross. Particularly if it wasn't created within a historic context or does not have historic value.

For example, modern summit crosses, used to mark peaks. In order to be seen from afar, they are mostly big, heavy and simplistic.

This tag is used for crosses as standing structures and is not used for painted, carved or extremely tiny crosses.

Same or similar as historic=wayside_cross. In some maps, the symbol for wayside crosses includes a roof, while the symbol for other crosses doesn't. A peak with a cross is often shown as a peak sign (e.g. a triangle) surmounted by a cross. Renderer should be aware of micro mapping. A summit cross can be a separate node with other coordinates than the peak. An elaborate renderer may merge a peak with a cross within a radius inversely proportional to the zoom level.