What are the trunk roads in MB?

What are the trunk roads in MB? They should include all the core routes of the National Highway System of Canada, probably. But maybe some of these should be just primary. Let us reach consensus with a discussion on this page.

my comments:
The Overview 2007 report omits 100 and 101, seemingly by accident. The graphical map shows a ring around Winnipeg, seemingly including 100 and 101.
What about HWY 1 through winnipeg? Should it be a trunk, or a primary, when it's in the urban area? This would include the rail depot and airport roads. Do they get marked as trunk?
The feeder highway to thompson should just be primary, i think, and the northern route to Flin Flon should probably be secondary.
—Fudoreaper 06:54, 24 March 2009 (UTC)

The problem with 100 and 101 is that the people who should be telling us the answer, i.e. the NHS people, aren't. It's already determined how these highways are classified, we just can't find the correct answer. I'd call them both trunks if it were up to me. I believe 100 has always been considered to be part of the NHS, and it looks like 101 is now too. I agree that PTH 6 to Thompson should be primary, but I feel that way because its a PTH. So far, I don't believe there's any federal money in it, although they may be proposing it. If it was federally funded, then shouldn't it be a trunk as well? If not, then how are we defining what is a trunk? And I don't agree that PTH 10 to Flin Flon should be classed as secondary. Its a PTH after all and deserves the primary designation. It shouldn't be demoted to below other PTHs just because its considered secondary by federal standards.
Swaff 07:23, 24 March 2009 (UTC)

Okay yeah i follow this. So all PTHs are primary, which takes care of those northern highways. We can also make HWY 1 a trunk through the city, like How Edmonton and Calgary (kinda) are right now. The only question would be about those intermodal routes withn the City. Primary would suit, probably. But some of those might be demoted to secondary? —Fudoreaper 07:47, 24 March 2009 (UTC)

Page 26 in this 2009 Condition Report has a more detailed map of the Manitoba highways. The Trans-Canada Highway inside the city is not part of the NHS.

Any objections to reclassifying the intermodal connections as trunk routes? The NHS officially includes the Man. Hwy 221/Inkster/Keewaitin connection between the North Perimeter and CPR Weston, but now 221 seems to be replaced by CentrePort Canada Way (Route 190). —Michael Z. 2014-01-19 21:02 z

I've basically been tagging places based on how significant I felt they were to the area. Obviously that's not a very scientific approach. While OSM provides guidelines, based on population, on how to tag a place, I don't think it works well for Manitoba. For one our population, particularly outside of Winnipeg, is so thin, each town has more significance here than it would elsewhere. A town of 2000 people wouldn't be of much significance in Europe or California, but is in Manitoba. Secondly, it can be difficult to determine the population of a town since many in Manitoba aren't distinct political entities, but are part of the larger rural municipality. Population counts are generally done by municipality and not by physical location. So the town of Gimli for example, is part of the RM of Gimli. Its easy to know how many people live in the RM but tough to find out how many of those live in the town versus living in the rest of the RM.

So in looking at how I was tagging areas, I realized it had much to do with the "significance" of the town and that was largely based on the amenities located there. Most rural towns exist to support the agriculture in the outlying areas and so they become more significant as there are more amenities that draw people to attend these towns. The further you move away major centres like Winnipeg, the more significance smaller towns play, and consequently the more amenities they are likely to have relative to their population. Since the place tag is likely to determine what zoom level that place appears at on a rendered map, as population gets more sparse, these smaller towns become more significant in relation to their surrounding areas. A perfect example of this would be the town of Churchill. Churchill appears even sometimes on world maps despite having a population of less than 1000 people. While it is significant as an international port and tourist destination, its also in an area where there's nothing else around. This makes it more significant to the area, but also from a practical standpoint, there's lots of room on any map to fit it in. By comparison however, a town of 1000 people located in the shadow of Winnipeg would be completely insignificant.

So in looking at what more significant towns and villages had for amenities compared to the others, I noticed a pattern where what I was typically tagging as a village always had at least a school in it, and towns had at least a hospital and a high school. Hodgson was one example of a very small place that had a hospital in it, so I decided to add the high school requirement to the town as well.

As described on the page, cities are all unique political entities and thus it is easy to determine their population and set a threshold of a minimum population. I looked up populations on Wikipedia and decided that the seven mentioned were the most significant and easy to call a city, and therefore picked a population of 9000 based on that.

So that's my rationale. As mentioned, these are guidelines only and can be modified or ignored as necessary, but it provides a starting point.

Should Manitoba RMs be tagged with admin_level=6? This appears to be closest description in the guideline (“regional municipalities [Ontario's York Region, Peel, Quebec's MRCs, etc.] and counties”).

NRCAN released a trove of building footprints from LIDAR, sourced data from the Manitoba Land Initiative. This data can be accessed here: https://open.canada.ca/data/en/dataset/7a5cda52-c7df-427f-9ced-26f19a8a64d6. I'm going to work on slowly uploading this to OSM - Of course not overloading any previous data. MLI data has already been uploaded and local users added more to the map 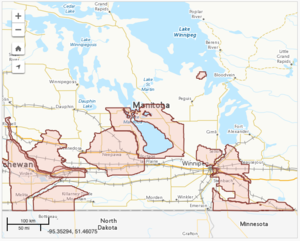 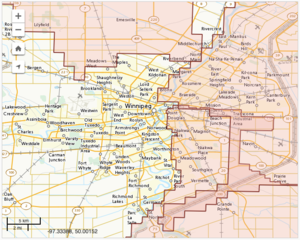