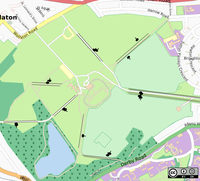 This is a lane

Like a footway, a cycleway or a driving lane a "line of trees" is a lane. It's width and if it can be passed (bushes or grass between trees) is a valuable information for blind persons. Landuse is not sufficiant for that usecase. --Lulu-Ann 07:03, 16 May 2009 (UTC)

I think the trees in this case are to bee seen as a feature of the road; that's why there are special words for this ensemble. For dams and fences for example I would also prefer separate lines - not so for the trees of an alley. I think that's also the way this feature is "implemented" with the official maps I'm used to. (see below) This way it's also clear that with this road there may be some special dangers to think of - like the height of a lorry conflicting with the tree's branches above the road, lighting issues, slippy surface from wet or rotting leaves, ...--Ido 00:18, 31 October 2009 (UTC)

To this suggestion of mine I'd like to use barrier:*(hedge/wall/guardrail/hwatever):right/left/both at highway tags to describe the barriers accompagnying them. I guess I'll have to propose a little bit on my own. -- Malenki 19:13, 19 August 2009 (UTC)
I prefer your suggestion over the OP (long discussion above). I prefer solutions which use natural=tree. I like your suggestion for using pre-existing tags to describe aspects of the highway corridor (although these could be separately micro-mapped). It retains consistency, reduces tag proliferation and seems to meet the range of requirements described on this page. SK53 19:29, 19 August 2009 (UTC)

PS: after adding all that stuff (p.e.: natural:tree=left, barrier:railguard=left, footway=both, cycleway=both) a scheme to put these tags into the right order (after the highway the cycleway, then the footway, then the barrier:guardrail, then the trees) is needed. Somewhere at the wiki I found a suggestion how to handle that, but atm I don't find it anymore :( Proposed_features/lane_and_lane_group (tx to Lulu-Ann :) ) -- Malenki 19:48, 19 August 2009 (UTC)

A line of trees is a kind of lane. It is a valuable information for blind persons. See OSM for the blind. Left/Right is not enough, we need to be able to stack different kinds of lanes next to each other, like fence, footway, grass, cycleway, tree line, bus lane, 2 car lanes and mirrored or not on the other side of the road... --Lulu-Ann 21:50, 19 August 2009 (UTC)

rendering of streets with tree rows 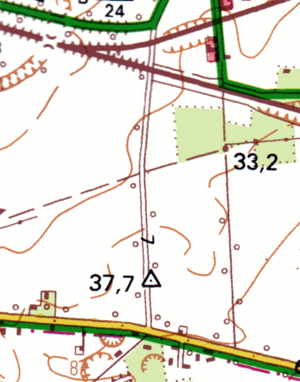 Official german topographical maps show streets with tree rows - also which sides of the road are tree-lined. They usually render small (brown) circles beside the road. Here's a small sample of what that looks like.--Ido 23:56, 30 October 2009 (UTC) 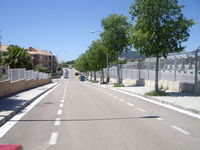 I should make a line for marking the sidewalk and then put tree row. But does this "overwrite" the sidewalk tag? Proposed_features/Sidewalk So how can I combine this two tags?