From OpenStreetMap Wiki
< Talk:Software
Jump to navigation Jump to search

Applications listed in sub-categories, but not here

Why are applications listed in their sub-categories, but not in this list? Isn't this list intended to show all available mobile applications? Otherwise it should be made clear what exactly is listed here. --ChristianVetter 11:02, 26 October 2010 (BST)

Hi Christian, I added (J2ME) to the Software page link to this page to make it more clear. The decission was to keep the lists as small und easy to understand. Normally you looking for a tool for your desired platform and so the subpages concept will simplify this process, doesn't it? --!i! 11:37, 26 October 2010 (BST)

Maybe this page should be renamed to "J2ME" and the links to the sub-pages removed? Furthermore the "platform" column could be deleted. --ChristianVetter 08:57, 28 October 2010 (BST)
I'm not sure if so many people would be happy with a renaming of this page cause it's still very central. Personaly I would preffer it but I think this will make troubles. I'm not sure if it's that easy to tell the bot that we don't need the platform column here. I guess it's not that a big visual problem ;) --!i! 10:52, 28 October 2010 (BST)

Getting rid of the platform column is easy: Edit the line {{SoftwareTable ... cols=nameAndWeb,screenshot,mobile_platforms,base_cols ... below the table so it says {{SoftwareTable ... cols=nameAndWeb,screenshot,base_cols ... instead (i.e. remove the "mobile_platforms"). Then wait for the next bot run. --Tordanik 11:13, 28 October 2010 (BST)
If renaming is not an option, why not move all J2ME software to a sub-category? --ChristianVetter 11:22, 29 October 2010 (BST)

Afterwards we could just redirect from this page to Software --ChristianVetter 11:26, 29 October 2010 (BST)

I think the two columns in the table called "Link" and OSM-wiki are not necessary: Both informations can be written in the very first column "Name". So we can make the table a bit smaller. When we already have an extra page in the OSM-Wiki, tag the name with [[]], in other cases, tag the URL to the application's homepage with [].

It's a good idea to create wiki pages about each individual mobile software which is of interest to us, but we can't aim to create perfect documentation all at once. Each of these pages will initially get created as a stub (as a minimum this should link back to list pages like this, and also link to the official website). We're not aiming to replace someone else's documentation, so if there's well maintained documents on a website elsewhere, then the wiki page here may not progress beyond a stub with links. But it does give us space to expand, and an elegant place to wiki-link to. This takes the pressure off pages like this. We no longer need to cram in lots of columns of information, because software can be described in more detail on its dedicated wiki page.

BUT for this to work well, a list like this needs to link to the wiki page as well as (or perhaps even instead of) the external link to the website. We could even set up red links where stub pages have not been created yet. Red links tend to offend people's web design sensibilities. But remember, it's not a broken link. It's just a page waiting to be created.

Some table headers, like Fast POI buttons, would need an explanation. Do we mean a button that adds a waypoint without confirmation, or is a button that lets you input a name of the waypoint (like in GpsMid) valid? Maybe <ref></ref> could be used to write short explanations in unclear cases? --Erik Lundin 22:42, 5 February 2009 (UTC)

I think this, what the OSMtracker do: 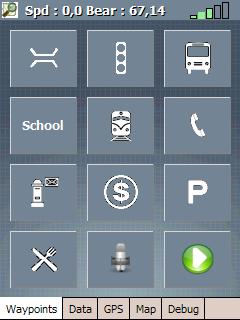 Are their any editors out their for Java/Symbion mobile phones, the only ones i've found are GPSMID not suitable as PAYG with no data plan and PyS60Editor which seems to be abandoned and not updated to API 6. Came accross a promissing one for android phones Vespucci which seems to do exactly what im looking for but not compatible with my phone. Would it be worth creating a table entry to show which software support OSM editing and if this in online or offline with upload? --Farrpau 20:43, 29 June 2010 (UTC)

Hi, this is the heart of the Software section. A lot of people have problems finding the right tool cause a lot are unfinished and the projects are dead. For us as editors the page is to big to get easy edited. How to improve? I would like a Screenshot and a last version date column(coloured if inactive project). What better tools (?templates?) to use? Suggestions and Comments, please :) --!i! 21:41, 9 August 2010 (BST) BTW we can save space if we use the small flag template (de) instead of Template:Language:german and using pictograms for the operating system or melt license, cost, Opensource column to one --!i! 07:17, 11 August 2010 (BST)

Just a thought, but perhaps breaking up this page completely by "operating system" (or "application framework") would help add some clarity again. If a user is looking for a J2ME app, they are probably not interested in an iPhone app and vice versa. Leave this page as a top level page linking to the subpages of Android, iPhone, Windows Mobile, Blackberry, J2ME, Palm... And perhaps some explanation as to which mobiles support which type of apps where it isn't obvious (probably mainly with respect to J2ME and the various java flavours.) Amm 10:14, 11 August 2010 (BST)

Well but an OS serves different device categories (e.g. Windows Mobile - Phones, PDAs, PNAs...). So we would have an entry at 1+3 different places?

You can link from the various "top level" pages e.g. Mobile Phones, PDAs, PNAs... to the same sub page "Windows Mobile". There might also be some other cross referencing, like that J2ME apps also run on Blackberry even though their might also be "native" Blackberry apps too. You can also install J2ME apps on Windows Mobile devices via installing a JVM first for example. Nevertheless, I do still think it is possible and probably sensible to split this page according to app framework with the necessary cross references. At least I think it is the most appropriate way to split it and make the page more manageable again. (In addition to some of your other suggestions) Amm 22:21, 11 August 2010 (BST)

I had a first try at Software/Desktop and must say it's a mess working with this huge tables :/ The best would be a template cause:
Is there anybody with wiki template experiences?
So what can we collect?

Ok I have a first prototype: Template:Sw allready working on Software/Desktop

User:Tordanik mailed me and had an great idea by using a tool that collects all software together basing upon the usage of an Box Template like Template:Software and generates HTML Reports that can be filtered. He allready has something from his job at wikipedia. I like the idea very much cause it solves the following issues:
Now the questions are:
Think this will make the big step we all expect :) --!i! 12:52, 13 August 2010 (BST)

To add some information: I'm going to add support to the tool for exporting wiki pages instead of HTML. Once there are pages with an appropriate template, I'll start to generate some example output. So what we primarily need now seems to be a template for use on the software description pages. --Tordanik 11:42, 14 August 2010 (BST)

Well I would like to prever one single template instead of splitting the templates up to ones for editors, logger,.... . I would suggest to create a temporary Software2 template that based on both Sw and Software template for testing and later migrating it with original Software (Box) template. For better overview I suggest to split it up into section for every tool details like i did in my one.

I created Template:Software2 and included all I could get from existing Lists/Templates. It has to become a little bit more extended but it's already usable. BTW our approach means, that we have to add a page fore every (even commercial toll). Is it ok in your opinion?--!i! 08:28, 17 August 2010 (BST)
Ok all /Desktop Software has now Template:Software2 with details. Hopefully enough for the first tests :) --!i! 18:09, 18 August 2010 (BST)

I've run the tool for Template:Software2 and generated User:Tordanik/SoftwareTest in the process. Obviously, there's a lot of room for improvement, so I'm looking forward to feedback! --Tordanik 19:50, 19 August 2010 (BST)

For better orientation I create this new chapter.
The Output looks already realy good Tordanik :) so what is todo? IMHO:

We had today a small conference here are the results: http://openetherpad.org/9sEluG2PqS

Imo, adding several of these boxes would clutter the page. They are very prominent and not useful for readers of the page. My suggestion would be to use two warnings:
If people repeatedly ignore those, we can consider switching to something more visible like these boxes, but I don't expect that it will be necessary. --Tordanik 21:20, 26 August 2010 (BST)
Well I only thought on one single instance of this hint ;) I guess we can add this one manual and add inline comments using your tool as intro for every generated table? --!i! 21:43, 26 August 2010 (BST)
Tordanik has a first prototype: User:Tordanik/SoftwareTest --!i! 16:25, 27 August 2010 (BST)

I just want to point out, that within the next week we hope to get live and replace the old tables with the new ones on the Software pages. If there is till something to improve, feel free to contact us and take a look again at:

We hope that we will get the next Project of the week to make sure everybody notices the change and to check/update the tool pages by the users --!i! 09:15, 17 October 2010 (BST)