well this makes a difference. There is little point in having a tag this vaguely defined - Please either clarify or remove this tag. -- User:Frief August 11, 2009

We can clarify it more within the wiki writeup, I suppose. It's a little too widespread in use to remove from the OSM db. For barriers which prevent cycle access, I would suggest either bicycle=no or access=no (with no bicycle override). For those that merely hinder, use either bicycle=yes or access=yes (with no bicycle override). Hope that's acceptable; IMO it is not the job of a tag defining the rough class of a barrier to say exactly what does or does not have access. With this in mind, can you suggest where changes need to be made in your opinion? --achadwick 12:40, 12 August 2009 (UTC)

I guess it's mostly used in the sense of bicycle=yes (and in this case it would rather have (for bicycles) the character of traffic_calming instead of barrier). Perhaps it could be specified that per default bicycle=yes is implied. It sounds awkward to have a barrier that is not a barrier though. (I'm not a native English speaker, so maybe my connotations of a barrier are incorrect) --Frief 20:42, 12 August 2009 (UTC)

Barrier: prevents. Traffic calming: slows down. A cycle barrier cannot be passed by a cycle - I'm not sure if these exist. Motorcycle barriers do. As it is, 'cycle barrier' has no useful purpose as it doesn't state whether cycles can pass or not.-- pmailkeey 2016:6:22

Could cycle barrier get an option liftable_by_maintainer (yes/no)? Some cycle barriers can be lifted with a special key for special sporting events by local government or maintainer of that barrier. This information would be usefull to add for planning sports events. --Pander (talk) 11:11, 6 October 2013 (UTC)

Perhaps liftable is too specific as there are also barriers that can be turned out of the way, dissappear under ground or be detached. I think "removeable" (yes/no with unspecified implies no) is a better characteristic for cycle_barrier and other barriers. --Pander (talk) 11:47, 6 October 2013 (UTC)

I've used (albeit surprisingly) the tag motorcar=private - the operator of the gate can drive his car (usually the snow plow) through it by unlocking the mechanism. I guess that won't be true for all of these that can be "opened". Alv (talk) 13:59, 6 October 2013 (UTC)

Instead of generalizing it to "removeable", I would suggest to use "locked". I know two gates ([1] [2]) which are normally closed, but can be opened by anyone who needs to pass.
But I think tagging the area (road/path) behind the barrier is even better, the barrier is just a way to enforce an access restriction. A sign would have the same effect, but some people ignore signs. Saying bicycle=private implies a road is suitable for bicycles, but you can cycle there only if you have permission. In this case the permission is given by lifting the barrier. --Wimmel (talk) 17:58, 6 October 2013 (UTC)

This type of barrier is very common on the cycle paths, and often pose problems for non-regular cycles: trike, cargo bike, bike trailer with ... Can also create difficulties for disabled and horses. It may be interesting to give two different values of width as shown below: 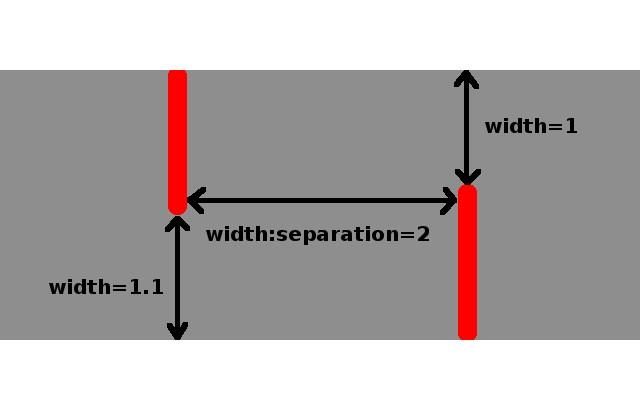 In this example, the passage width available is different depending on the barrier: it is the smallest which is retained. tag: