From OpenStreetMap Wiki
Jump to navigation Jump to search
Tag:barrier=cycle barrier - Other languages

Cycle barriers (or pedestrian chicanes) are fence-like barriers positioned along paths, footways, cycleways or tracks which serve to either slow cycle access or prevent it entirely depending on spacing and layout. Often made of steel, and laid out in a staggered chicane layout. The intent may also be to discourage motor vehicle access to the protected way: motorcycles and mopeds specifically.

Perhaps counterintuitively, cycle barriers are sometimes intended to permit access by cyclists to cycle routes while denying access to other vehicles. However, not all cycles are able to pass through them[1].

node that's part of the

way or track at the location of the barrier. Tag it with barrier=cycle_barrier.

You should also add further tags to more fully specify what kind of cycle barrier it is or what kind of traffic can pass the barrier. Depending on how much effort you can invest, there are these options to capture more information:

This general form of barrier can be very variable in the sorts of traffic they allow to pass, and the greatest variability applies to bicycle traffic most of all.

For standard bicycles, it's a very good idea to add one of

If it's a question of degree of rider skill, put yourself in the shoes of an unskilled novice rider.

Footpath ways marked "no cycling" which have barriers of this sort should additionally be tagged bicycle=no on the way itself. 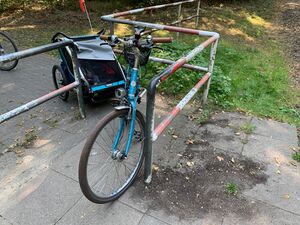 Cycle barriers can be a significant obstacle for cyclists, especially with trailers or cargo bikes, but also for people in wheelchairs or pushing a stroller – or even make a path completely impassable for such user groups, even if e.g. cycling on a path is actually permitted. Whether such barriers are passable by a vehicle with certain dimensions (width, length) depends on the distances and passage widths of the grids/bars of the barrier. Because of the wide variety of different cargo bikes, bicycles, trailers or even wheelchairs, access tags such as bicycle=*, wheelchair=* or cargo_bike=* may not be sufficient.

However, determining the passability of such barriers for a vehicle is much more complicated than for other barriers such as bollards or gates, since – depending on the type or design of a cycle barrier – specifying a maximum width is usually not sufficient. Rather, several geometric types, distances and dimensions have to be taken into account.

The following dimensions can be used to indicate the proportions of a bicycle barrier very precisely, from which the passability for vehicles can be derived according to their size (for details on how to determine the passability, see the proposal on advanced tagging of cycle barriers#Determine_passability). Which of these dimensions are necessary depends on the type/design of the barrier (see the table in the following section).

If a cycle barrier is obviously too narrow for bicycles, cargo bikes or wheelchairs, and you can't/don't want to measure the exact dimensions, bicycle=no, cargo_bike=no or wheelchair=no can also be tagged – but in general, access tags on barriers should be avoided if they can be derived more accurately from other attributes.

If there is a possibility to bypass the cycle barrier – e.g. via an informal path at the side – consider mapping this path separately with its properties and access information.

Assume that this kind of barrier implies motor_vehicle=no. If a cycle barrier can be opened or removed for vehicles such as emergency or winter services, use cycle_barrier:installation=* for this.

The key cycle_barrier=* can be used to distinguish the basic construction forms of cycle barriers – each with certain effects on their passability or the dimensions and distances necessary to determine the passability. It's a textual expression for typical, commonly found construction designs:

Despite the name, this kind of barrier can be very variable in shape and what kinds of traffic it stops or slows down, so it's a good idea to always add dimension or access tags.

Note: Sometimes, you can "count" width values if you know the exact size of typical paving stones that are used in your local area. The paving stones in the first and last picture, for example, are 10x20 cm in size – with this knowledge you can easily "measure" the distances.