Mounted on a support?

The description field suggests that this tag is used for nesting sites which are mounted on a support. But what about an old building or tower which has been purposefully converted into a nesting site for birds or bats. Is this a permissible use? Should the description be changed to make it clear that "mounted on a support" is possible, but optional? --Jeisenbe (talk) 12:33, 21 March 2020 (UTC)

In the Additional Tags section of the description page, it is stated that a support can be given optionally. When this tag was in proposal status another day, my local OSM group and I were discussing the additional tags, and we came to the conclusion that all additional tags are meant to be optional. So I would say:

Is this appropriate for bee boles? It looks like it would be, but I'd like to be certain.

Usually these are built into walls (isolated walls, not building walls) that also serve other purposes, although some of the walls were built for no other purpose than the boles themselves. There is an image on Wikimedia with a description which claims the bole is built into the wall of a cottage.

After looking at wikipedia:Beehive I agree that nesting site correctly describes bee boles. The only ones I know of happen to be listed buildings, so there isn't a privacy issue mapping those. However, a recent change to the page has added : "You should not map bee hives or bee boles with the man_made=nesting_site tag, but use man_made=beehive instead." You should perhaps discuss your opinion that it is OK to use this tag for bee boles with the person who made that change. :) Note that, according to that Wikipedia article, a bee bole is not classed as a bee hive because it is not enclosed, it is instead classed as a nest. --Brian de Ford (talk) 12:13, 23 March 2020 (UTC)

A bee bole is not a hive, although domesticated bees live in both. From wikipedia:Beehive: "A beehive is an enclosed, man-made structure in which some honey bee species of the subgenus Apis live and raise their young. Though the word beehive is commonly used to describe the nest of any bee colony, scientific and professional literature distinguishes nest from hive. Nest is used to discuss colonies which house themselves in natural or artificial cavities or are hanging and exposed. Hive is used to describe an artificial, man-made structure to house a honey bee nest." So "hive" is the wrong word to use for a bole (hives are enclosed, boles are not) and a bole is a nest whilst a hive contains a nest. --Brian de Ford (talk) 12:13, 23 March 2020 (UTC)

Would this also be a good tag to use for hibernation dens? I know several places around where features (like an ice cellar or a pumphouse) have been specifically repurposed to house bats during hibernation. For now, I've used man_made=hibernation_den.

Are you still using this tag? According to taginfo it's only used once for the time writing.

I think that man_made=nesting_site is a correct way to tag such features, however the current wiki page is not very clear about nesting sites other than those for birds. It might be helpful for people with the same question in the future if the page was updated with an example of an artificial housing space for bats.
Furthermore, support=* is often not applicable for bat housings. Instead I added location=underground to this node.

The taxon thing is indeed a bit strange, I asked about this in the tagging Discord channel and this was the reply: 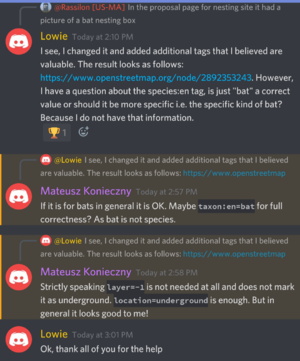 Also I looked at "your" way and saw the animal=bat. While it's a simple and clear way for tagging the animal, I believe the scheme with genus=*, taxon=* and species=* results in more consistent data. Since it can also be used for nesting sites that specifically designed for one kind of bird (like this wiki page suggest).
Other idea's or arguments are welcome. --Lowiecode (talk) 17:17, 26 February 2021 (UTC)