This article seems to emphasize that the tag is only for use with classical amphitheaters (i.e., theater in the round). But in the U.S., where such amphitheaters are rare outdoors, I've only ever this tag used on modern amphitheaters, which have seating in a semicircle on one side of the stage. theatre:type=open_air might apply for some of them, but the same user who documented theatre:type=amphi also documented theatre:type=open_air as being restricted to theaters in which the stage is uncovered. In fact, many (most?) amphitheaters in the U.S. have a bandshell. Famous examples include the Hollywood Bowl, Red Rocks Amphitheatre, and Shoreline Amphitheatre (next door to the Googleplex), but plenty of mundane city parks have such venues too. If they aren't amphitheaters and aren't open-air theaters, then what are they? – Minh Nguyễn 💬 19:50, 26 June 2021 (UTC)

I think it is not a bad idea to keep the word/tag "amphitheatre" as well as "amphi" for amphitheatres (as in Greek "amphi"=both, meaning the spectators are surrounding the performers and can look from different directions). Just because someone has called their theatre "amphitheatre" when it actually isn't, should not disturb us or lead us to use wrong tags. These are probably just "theatres" and not "amphi". This is not about "modern" amphitheatres but about misnamed theatres --Dieterdreist (talk) 15:38, 27 June 2021 (UTC)

That may be technically true, but from a practical standpoint, how many people out there mapping outdoor theaters are aware of classical etymology? It isn't just a case of fancy naming: in modern times, theaters are built this way and called amphitheaters, regardless of the name. Any attempt to reserve a tag value for classical amphitheaters without a corresponding tag for modern amphitheaters is going to be an uphill battle (which has already been lost, judging from a sampling of existing usage). I recognize that it may be a different story in other languages that use the word "amphitheater", but theatre:type=* values are meant to be in English – and for once, American and British English usage agree.

To clarify, I'm only suggesting that the definition be expanded to include semicircular theaters, not just circular ones, in order to match the predominant usage of the term in modern English. Audience members still face other audience members, just not from every angle as in theater-in-the-round. Alternatively, I'm suggesting that theatre:type=open_air be expanded to allow for the stage to be covered, just as theatre:type=amphi does. – Minh Nguyễn 💬 06:26, 1 July 2021 (UTC)

seems reasonable to include semicircular features, and isn’t in contradiction to historical use of the term either (AFAIK). Btw., the amenity=theatre tag suggests there is a theatre (institution), which tags would be suitable for an amphitheatre structure where there isn’t actually a theatre? These are quite common around here, for example this structure in a small village: 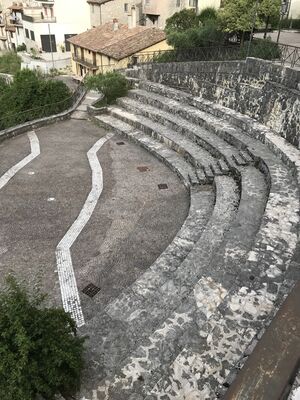 clearly not a building

Yes, this is quite common in the U.S. too. "Theater" means both the organization and the structure in English, so the same tag ended up being used for both definitions. When there is a distinction between the theater space and the theater company, I've gotten into the habit of always mapping the theater company as a separate amenity=theatre feature from the building. But for an outdoor theater, especially one that can't be considered a tourism=attraction, I'm not sure what to do. – Minh Nguyễn 💬 02:17, 7 July 2021 (UTC)

I've never seen brand=* used that way. I think it could be confusing to expect a theater company to be tagged on brand=* while amenity=cinema would use brand=* to indicate the name of the cinema chain. Maybe operator=* could work for a Broadway theater company, but then it wouldn't really work for a local theater company in a less famous venue. – Minh Nguyễn 💬 19:54, 13 July 2021 (UTC)

Yes, for closed theatres the issue can be mitigated by using building=* for the structure and amenity=theatre for the institution/troupe. Still the theatre:type=* is bringing in some inconsistency, as these are used for the physical properties while theatre:genre=* is mostly referring to what is actually happening there (to a smaller extent, sometimes it might also be seen as a description of the venue). While these are distinct tags, their structure somehow suggest they belong together, and amenity=theatre references both of them.
For structures that aren't buildings in OSM, in particular some amphitheatres (I would argue those with a roof or closed spaces could be considered buildings), 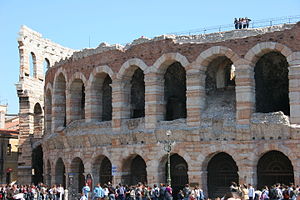 can be seen as a building
see example image what could be seen as a building) and other open air venues, there is an issue as the typical use is (AFAIK) amenity=theatre regardless of someone playing frequently or the place being public space (or inside a property) and only rarely used for performances (i.e. we would be interested in tagging the physical thing here).
tourism=attraction is a tag to weasel around the problem, but it doesn't satisfy the semantic level.
Maybe the solution would be man_made=amphitheatre for the structure (if it's not a building) which has some very modest use currently: https://taginfo.openstreetmap.org/tags/man_made=amphitheatre --Dieterdreist (talk) 09:11, 7 July 2021 (UTC)