Like many other pages in the WikiProject Haiti the Hospitals (i.e. the health facilities) page should be refreshed now that we are not in the quake response mode anymore. Most Important additions that I can think of are

This page should be retired and/or merged in favor of WikiProject Haiti/Status/Hospital/Report. --Ceyockey 13:00, 1 February 2010 (UTC) 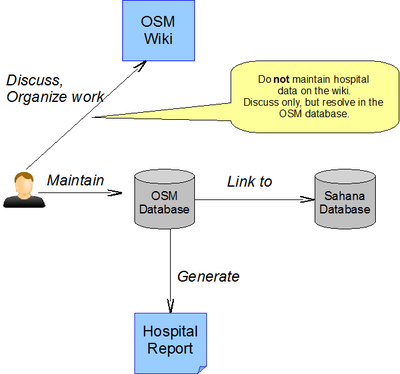 It would be useful to have an indication of the degree of confidence in location for the Hospital. There are a couple of levels which are currently in the data:

I am putting this out there as a suggestion on what fields to include / recode in the Hospital Report to provide a confidence scale value to track progress and reliability against.
--Ceyockey 21:01, 1 February 2010 (UTC)

I've made these suggestions so that the Sahana data might better match the current standards related at pages accessible from below:

I would suggest not limiting the scope to Sahana data, but expanding to encompass all hospitals in Haiti. --Ceyockey 02:35, 2 February 2010 (UTC)

I've been looking through the tags in use and have not found a good tag for handling a temporary medical clinic.

I've checked at Humanitarian OSM Tags and they appear not to be considering this particular issue there at this time.

Problems with data in the PAHO/WHO dataset

post-import problems - how to flag

I have been looking over the PAHO site and have not identified the primary source for the hospitals master index. Could a link to the original data source (or instructions of how to get to it) be added to the page? This is important for maintaining reproducibility. --Ceyockey 14:59, 7 February 2010 (UTC)

Searching for an individual hospital by name

Could instructions as to how to find an individual hospital by name be added to the page, please? Thanks. --Ceyockey 15:00, 7 February 2010 (UTC)

Thanks. I thought those were the answers ... I am a novice at using the Xapi, though. Also, will the names appear in Nominatum at some time, so that a search for a hospital name would be accessible from there? --Ceyockey 16:44, 8 February 2010 (UTC)

Suspected duplicate PAHO entries and data from outside PAHO

Example: relation 403840, which has three potential duplicate objects any of which might map to the "Hôpital Justinien" entry in the CDC/USAID PMTCT Baseline dataset.

Does this mean that consequently we had maybe better use *really* "ad-hoc" tagging in Haiti then, and use "amenity=hospital" for health centers dispensaries (in addition to the current semantically precise tags), to have them rendered on the map shown on www.openstreetmap.org ? (A bit like what was done for the displaced persons camps.)

The other two maps are (at least) 3 clicks away from this front page. And people not familiar with OSM, or looking for a health facility in an emergency case, might have difficulties finding them.

To quote from a recent private mail on a related subject: "I'm not a tech and can't figure out that OpenStreets think. I go there see a bunch of links and nothing is meaninful to me"...

There was thread on talk-ht about this issue. --Gubaer 09:40, 10 February 2010 (UTC)
This note was posterior to that thread and raising a potentially serious problem not satisfactorily answered there. Is there any objection to carrying out this ad-hoc tagging, to make Haiti medical facilities directly visible on www.openstreetmap.org ? (Map users can use the name information to categorize the facility. But only if they *know* that there is something there) -- jgc 2010-02-10 17:10 (UTC)

There's just one principle in the way: don't tag for renderers, adjust the renderers to visualize well-designed tag sets. We didn't adhere to it at the beginning of the crisis (that's why IDP camp sites have been and are tagged as tourism=camp_site) but we shouldn't violate it any longer. I don't know a lot about the PAHO classification but I assume that a dispensary in their terminology isn't a amenity=pharmacy and a "CAL" isn't a amenity=hospital. I think that these priorities still make sense. --Gubaer 17:34, 10 February 2010 (UTC)

In order for the different health_facility types to make sense we both need definitions for them and an understanding of what source(s) provide sufficient information to apply something more than the generic 'amenity=hospital' to. Further, should think more broadly than Haiti utility alone, which might require compromises. --Ceyockey 10:19, 12 February 2010 (UTC)

The "meaning" (semantics) of these types is supposed to be defined in the Humanitarian Data Model, for which there is mapping to the PAHO data model already. Meta-data from PAHO isn't very verbose about the "meaning" of these types, but from the short descriptions of abbreviations like "C/S" we can infer the intented semantics. --Gubaer 10:26, 12 February 2010 (UTC)

Over at WikiProject_Haiti/Tasks_and_Ideas#Mapping_Tasks there is a mention of needing to have help in importing hospitals. Should this task be moved to the completed pile now? --Ceyockey 12:24, 13 February 2010 (UTC)

Yes, I think we can remove the task, although it isn't completed yet. The first import is done and I'm currently working to get the import of v3 working. In contrast to the v1-import there isn't a pile of tasks which could be distributed to other mappers. At least not yet. --Gubaer 23:54, 14 February 2010 (UTC)

I think it would be good to see if the "Mars and Kline Psychiatric Center" can be mapped. This is mentioned in ...