the problem depends on the GPS receiver, some have a barometric altimeter that works rather good (if it's calibrated or had enought time to calibrate itself by GPS signals) Frank 00:25, 28 Feb 2006 (UTC)

The SRTM database contains altitude information for the whole planet. It appears to vary in accuracy from 3m in parts of the US to 90m for most of the rest of the world. IMHO 90m is not quite good enough for practical use by a skier. If a route got you to a point 90m below a lift you would curse your map quite severely.
However, this data seems to be being added to on a continuous basis, so I suspect that more accurate data might be available within a few years.
For ski maps the most important information is actually the elevation of the top and bottom of each lift. In some cases this is actually displayed on a sign at the lift station. I assume that collecting this would not be a copyright violation, right? 80n 10:01, 28 Feb 2006 (UTC)

Can we use namespaces to separate ski labels from other types of label? For example, opm:capacity and opm:difficulty would ensure there was no collision or conflict with other possible uses of labels named capacity and difficulty. There would be a complete namespace for piste maps (opm=Open Piste Map) which can be as rich and detailed as required without even really being visible to others. Right now this would appear as tags="class=piste;opm:difficulty=blue;", but in future might be served up as:

I propose dropping the old "class=piste|lift" in favor of a new scheme:

the other tags can remain

To get more users , or at least more tracks collector, I've left a message on one of the most important ski/snow site in France : Skipass.com. It has a large community of users which might be interrested in this project. --PhilippeP 18:26, 13 March 2008 (UTC)

Nice one. Might be a good way of promoting OSM in general, getting people involved in these niche projects. No doubt there's various english speaking ski forums where we could post about OSM too. -- Harry Wood 15:17, 14 March 2008 (UTC)

I did so on some nordic ski forum (although there is no big french community as Skipass!). The smallest rendering of nordic pistes would be of help to recruit! -- yvecai 21:57, 7 February 2010 (UTC)

xc-tracks have never been specifically rendered on OPM. They are on the to-do list. Unfortunately I have a limited amount of time and have been solving some challenging database performance problems on the OPM server, so haven't been able to dedicate the necessary time to improving the rendering template. You are, however, welcome to send a patch if you want to put the time in to improve this stuff. Steve Hill 18:53, 18 January 2010 (UTC)

What would it be useful is for people to help add tagging guidance to the new Winter sports feature page detailing how to tag ski runs, sledge runs as well as provide a brief overview of tagging lifts. I am also working on the Aerialway Feature page which will cover ski lifts in more detail and help would be appreciated there as well. If people could help with these articles then I could try putting something together on ITO Map to render some of these additional tags for X-Country skiing etc. PeterIto 22:21, 19 December 2011 (UTC)

Would you mind if we sort this list by continent first, then country and then ski resort in alphabetical order? Waldrenner 18:12, 8 March 2010 (UTC)

I would propose Continent, Mountain area (massif), then ski resort. Lots of mountainous area are in border regions. Like the Alps, the Jura and Pyrenees in Europe. Then the resorts could be classified by countries if needed.

Seems reasonable for small mountains, but

Seems ok for big ones. Not so easy to find a way to do it, though.

I have just done a re-sort of the sections on a national/continental basis. It is not perfect but should be better than how it was organised (if it was actually organised)! You will notice that there appears to be some duplication of resorts in Canada which I will leave to the experts to merge. Feel free to continue moving the headings around. PeterIto 22:07, 19 December 2011 (UTC)

Old data on the Page and the Site

Some ski resort maps in Garmin image file format are available on http://www.skidea.com.

Like pistes, the majority of ski lifts are usable in one direction only. It can be difficult to visualise how a network of lifts and pistes are connected when a piste map is rendered in 2D. What most users of the map want to know is, from a given position 'A', which lifts can I take to get me to 'B'. For lifts, it is helpful to have the direction shown by rendering the way with some kind or arrow although this is not always easy to see when the map is displayed on a hand-held device and the user is standing in a blizzard.

From my own experience of using digitised ski maps over several years (not from OSM data), I have found it to be extremely useful to have the name of a lift displayed at the point where it is possible to get on that lift. For the most part this just means at one end of a chair-lift or drag-lift. For gondolas and such-like, the name appears at both ends as it is usually possible to take these lifts in either direction.

In order to achieve this it will be necessary to provide information on the individual nodes as opposed to the way itself. Many such nodes are already tagged with the aerialway=station tag. I propose that we extend this to incorporate the accessibility:

This gives the renderer the opportunity to treat accessible ends of lifts differently to non-accessible ones.

By adding the name=* tag to the node, all the information needed is available for the renderer. Most renderers automatically show the name of a node if it exists (e.g. Mapnik, Osmarender and mkgmap). By having the renderer only display the node if it is accessible (aerialway:access=entry or aerialway:access=both) this achieves exactly what I needed.

I have added the tags as described above to the Espace Killy and Paradiski areas. I don't plan to expand this further until I've circulated the idea for a while. I'm prepared to change or undo this if the consensus is it is not a good idea or there is a better way of achieving this.

Here are a couple of examples from Espace Killy. Both were rendered for a Garmin GPS by mkgmap. 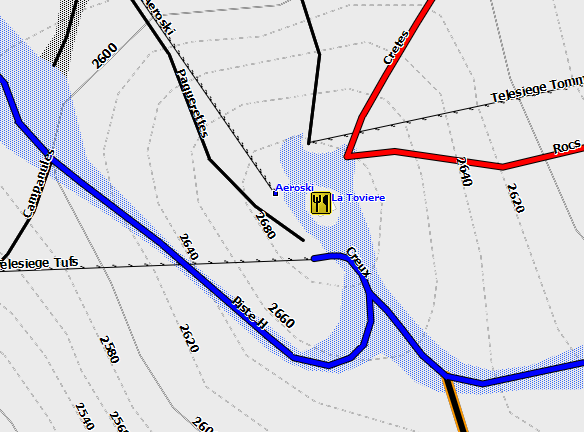 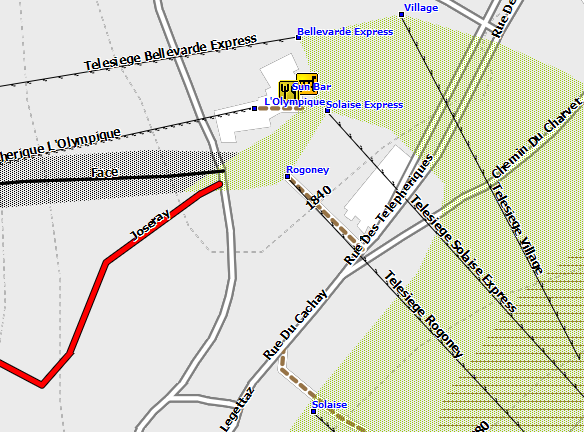