In the United Kingdom access to land and ways (footpaths, bridleways etc.) may be provided by a statutory legal right of access, or a by permissive access provisions. This page describes how OpenStreetMap contributors should tag access provisions, and how the tags should be interpreted by map users/consumers.

It should be noted that legal rights differ between the countries of the United Kingdom, and can have many layers of complexity. If you wish to know your legal rights to a specific path you should consult the relevant local authority.

Before you can add access provisions to a way or land area, the feature must first be added to OpenStreetMap! There are several pages on this wiki to help a user map and tag a feature. Once the feature is mapped you can then add the relevant designation=* or access=permissive tag as recommended below.

Note: Rather than being influenced by the name of the access provision, tag the feature according to what you observe on the ground. For example a 'Public Footpath' that runs along the route of a farmer's track should be tagged as highway=track rather than highway=footway.

A permissive path is one in which the land owner had decided to allow some form of public access. As they are not covered by rights of way legislation access is at the discretion of the landowner, with common restrictions including use only during daylight hours, and that dogs are banned entirely.

Often there will be a notice at either end of the route explaining this and setting out any conditions the owner has set. There may also be a notice saying that the owner does not wish the path to be dedicated as a right of way.

Commonly found on National Trust or Forestry Commission land. Technically access can be withdrawn at any time, though in these cases the access is unlikely to be withdrawn. These are often waymarked with white arrows, but beware of weathered yellow arrows that appear white!

In England and Wales, public rights of way are paths that have been officially designated by the local authority ("surveying authority") as a way on which the public have a legally protected right to access. They can be difficult to identify on the ground as signs differ across the country.

Each surveying authority is required to keep a record of public rights of way in two documents; the Definitive Map and Definitive Statement. The maps are typically based on OS mapping, so subject to copyright and cannot be used in OpenStreetMap. However, Ordnance Survey have now confirmed that they don't claim any IP rights in the descriptive statements.[1] However, both the maps and statements will contain the IP of the local authority who maintain them, so permission would still be needed from them before they can be used in OSM.

Any path not on these documents by 2026 will no longer be a right of way. We are hoping to get the definitive statements released under a compatible license so that we can help identify missing paths. See UK local councils.

Tag presets are available in the JOSM editor: see #JOSM presets below.

The most common countryside right of way is the public footpath, where access is restricted to pedestrians and their "usual accompaniments". This includes pushchairs and wheelchairs, though the ground generally may not be suitable so please include the surface=* tag where applicable. Dogs are also legally allowed on all public rights of way. There is no default requirement that dogs be kept on lead on public rights of way but local authorities may issue orders to that effect (in which case you should add dog=leashed to the way). Additionally, legislation exists that requires dogs to be kept "on lead or under close control" in fields with livestock present.

Typically marked by signposts bearing yellow arrows, wooden pointers, or yellow waymark arrows attached to posts. Look out for the words "public footpath" on the guidepost or on the surround of the waymark arrow to be certain that the way can be tagged as a public footpath:

Note: Rights of way should be marked even where no visible path can be seen on the ground (providing that there is some indication, sign post or other, of there in fact being a right of way). In such cases a surface tag is highly recommended.

Confusingly, arrows of any colour that identify long-distance trails, do not imply anything about legal status. These and other markings (including plain yellow arrows) that do not include the words "public footpath" should be tagged as a suspected right of way if you believe they may (or should) be a public right of way. These paths can then be checked with the local surveying authority. 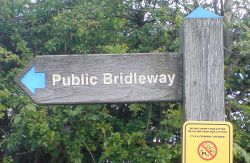 Public bridleways have greater access rights than footpaths, there is access for pedestrians and horse riders - and (by the Countryside Act of 1968) cyclists as well where not forbidden by "orders made by a local authority", or by "any bye-laws". Cyclists must give way to walkers and horseriders. Generally marked with blue arrows. Follow the guidance provided about public footpaths above to determine whether there is enough evidence to tag. 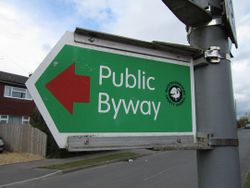 Known formally as Byway Open To All Traffic (BOAT), byways are public highways maintained to a lesser standard than normal roads. Some may have perfect tarmac surfaces (highway=service) but typically they are rough farm tracks (highway=track). They are rare, making up only 2% of public rights of way. To tag as a right of way look for the words "public byway" on the guidepost. Ways signposted simply "byway" may also be tagged if the sign also carries a red arrow.

Whilst some are drivable in a standard vehicle, a four-wheel drive is usually recommended if you are not sure what to expect ahead especially in wet weather. As they are usually not maintained to as high a standard as public roads some byways may deteriorate and become no longer passable by any vehicle. If this is the case consider using vehicle=no and/or barrier=debris on select nodes of the way. Finally, to prevent further damage to the highway and surrounding environment, some local authorities have used Traffic Regulation Orders to close access to some traffic types (commonly motor vehicles). These restrictions should be added using appropriate access tags. 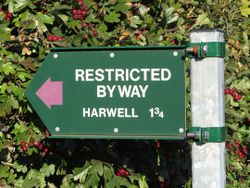 Are tracks with similar access rights as bridleways but also allow vehicular traffic that is not mechanically propelled. This includes horse-drawn carriages and pedal bicycles. Motor cars, motor bicycles, quad bikes, motorised scooters, etc. are not permitted. The Restricted Byway replaces the former category of Road used as a Public Path, which no longer exists. They are typically waymarked by plum-coloured arrows.

As with BOATs, they may no longer be passable by any vehicle (vehicle=no and/or barrier=debris on select nodes of the way).

Mapping PROWs can be tricky and often the situation is more complex than it may first seem. Further guidance is available in handling such cases.

Although the New Forest was an early example, the Countryside and Rights of Way Act (2000) (AKA the CROW Act) means that there is now a lot of Open Access Land in England and Wales; particularly in upland areas and on common land. There is open access on foot to the entire area (except on designated dates) via specified access points. There may or may not also be "normal" public rights of way across the land. The landowner does have available certain legal restrictions on access (although these tend to be minor, pragmatic, and temporary) so access is not quite as free as the "everyman's right" in, for example, Nordic legislation (allemannsrätt, jokamiehenoikeus, etc.). For OSM, it would seem to make sense to map the boundaries of access land as boundaries and to map the specified access points to the area as nodes.(Mikh43 08:43, 15 September 2009 UTC)

An open dataset of access land polygons is available from Natural England: CRoW Act 2000 - Access Layer. Since it's available under the Open Government Licence it is suiatble for use in OSM. A visualisation is available at https://openover.raggedred.net/.

Scotland has its own distinct concept of rights of way, however these essentially became a less important when the Land Reform Act (Scotland) 2003 established a general presumption of access to all land in Scotland.

The Land Reform Act (Scotland) 2003 established a general right of access to most land and inland water in Scotland. This applies to any non-motorised transport, including walking, cycling, horse-riding, canoeing and rowing. This includes access for recreational, educational and certain other purposes and a right to cross land, and is subject to exercising these rights responsibly, as specified in the Scottish Outdoor Access Code. Access rights do not apply in certain places, eg houses and gardens, land where crops are growing, playing fields while they are in use, golf courses, airfields, railways, construction sites etc.

See also: wikipedia:Land Reform (Scotland) Act 2003 and wikipedia:Freedom to roam#Right to roam in the United Kingdom 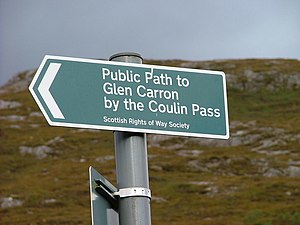 In Scotland, a right of way is defined as any defined route over which the public has been able to pass unhindered for at least 20 years. Local authorities are not obliged to record or signpost rights of way, so most are unmarked. The charity Scotways is recording them in the National Catalogue of Rights of Way, as well as signposting some of them.

There are different categories of use for rights of way: pedestrian, bicycle, horse and vehicle. Though this may not be recorded or signposted as such.

The Land Reform (Scotland) Act 2003 requires each local authority and national park authority to produce a plan for a system of core paths (designation=core_path) in their area. Core paths may include paths, tracks, roads and waterways. Core paths should be recorded and promoted by the authority, which may include signposting and maintaining the paths.

As of 2012, some authorities have adopted a core path plan, other authorities are still consulting.

There are three types of public rights of way in Northern Ireland:[2]

Although not part of the United Kingdom, instead being a British Crown Dependency, tagging discussions for the Isle of Man still tends to fall under the OSM UK banner.

There are four types of public rights of way on the Isle of Man:[3]

Public footpaths make up the vast majority of rights of way and can be further classified into four categories (Premier Routes, Green routes, Amber routes, and Red routes) based on imporatance and usage.

The above suggested designation tags are based on current usage on the Isle of Man and for convention with England and Wales PRoW tagging.

Presets in JOSM's format are available for path-like rights of way in England and Wales which have a definite, verifiable legal status. They can be added via JOSM's Tagging Presets preferences page, or downloaded as a Zipped bundle or in XML format from the JOSM wiki[1] for use in other apps.

These presets use a hybrid approach which combines the classic and alternative tagging styles. In short they allow you to use richer, classic-style highway=* tags, apply a full set of global-style access=* tags, and set the required designation=* value. See the explanation and rationale on the Talk page for full details.

UK Designation Tagging Warnings is a report on values of the designation tag, listing those values that are close (in terms of spelling) to common values. The list, generated using the taginfo API, also includes incorrect or temporary values.

Some mappers have started to contact UK local councils to request use of their Definitive Statement document under the Open Government Licence. Find out more.