In the United Kingdom, trig points are typically concrete pillars and were erected by the Ordnance Survey. The process of placing trig points on top of prominent hills and mountains began in 1935 to assist in the accurate retriangulation of Great Britain. 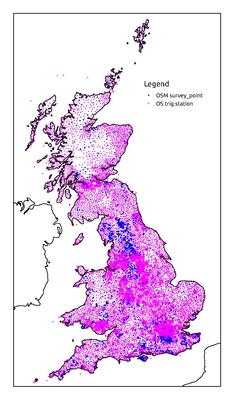 As part of a Freedom of Information request, Ordnance Survey published their database of triangulation stations and their precise locations as OSGB36 (National Grid) co-ordinates. A similar list – which also includes flush bracket numbers, often referenced in OSM data – is also available on their website.

Unfortunately you can't download a single CSV including flush bracket numbers to cover the entire of Great Britain; the easiest way to download in bulk would probably be to download one Landranger sheet at a time. I emailed OS to confirm under what licence this data is published, and they have kindly agreed to publish it under the Open Government Licence v3, allowing usage in OSM.

The OS data contains trig stations that have been destroyed or recalculated, so I have filtered these out in my visualisation and analysis of the data.

I wanted to use QGIS to analyse the correlation between the OpenStreetMap man_made=survey_point nodes and the OS triangulation stations. In order to use QGIS's distance matrix function I needed the data in a single CRS, and as the British National Grid uses metres as units it made sense to convert the OSM data to this rather than convert the OS data to WGS84. Using QGIS's default transformation to convert the OSM survey points, errors of several metres were visible. When analysing the distance between each OSM survey_point and its nearest OS trig station, the most common distance was between 6 and 7 metres. This is because the default transformation in QGIS is not particularly accurate. 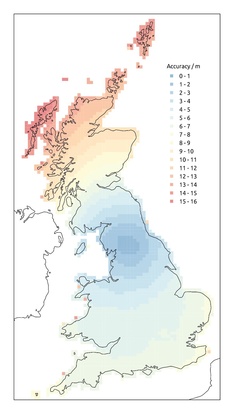 To achieve greater accuracy, I needed to use the OSTN02 transformation via the NaturalGIS ntv2_transformations plugin and OSTN02 download from OS. As a matter of interest, you can see how the accuracy of the default QGIS transformation compares with OSTN02 for different parts of Great Britain in the map on the right.

I think it's fair to assume that the OS co-ordinates for each trig station are very accurate compared with the co-ordinates of OSM survey_points. The OS website states that although the data is no longer updated and the co-ordinates for each station can 'no longer be considered as true OSGB36 National Grid Coordinates', 'it is expected that agreement between ETRS89/OSTN02 derived coordinates and the original archive coordinates of triangulation stations (down to third order) will be at the 0.10 metre root mean square (r.m.s) level'. I have therefore assumed that the OS co-ordinates are always correct and it is the OSM survey_points that may be inaccurately positioned.

Comparison of the OSM and OS data

With the data accurately converted I used QGIS's distance matrix function to measure the distance in metres between each OSM survey_point and its nearest OS trig station. I then used R to draw a histogram showing how many survey_points fall into each metre band (e.g. how many OSM survey points are between 0 and 1 metres away from an OS trig station). 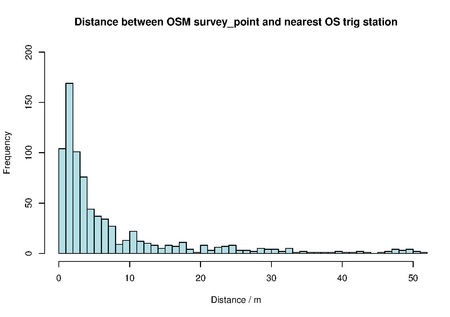 I believe this data source could be considered for import into OpenStreetMap. At the time of writing, OSM users in Great Britain have already collected 1488 nodes tagged as man_made=survey_point. Obviously these are not necessarily Ordnance Survey trig stations, but it shows an interest in tagging survey points generally.

Triangulation pillars – one kind of trig station present in the OS database – are featured on OS maps as a navigational aid and point of interest and there is a community of trigpointers who like to go hunting for trig stations of all descriptions, so there could be some practical uses for this data.

The French OpenStreetMap community seems to have imported similar data (link in French or automatic translation) from the national mapping provider IGN, adding a note to each node asking users not to move them.

If the OS data were to be imported, presumably it would be best to merge it with the existing OSM data. The existing tags could be kept and OSM survey_points within a certain distance of an OS trig point could be 'snapped' to the correct (i.e. OS-supplied) location. The question remains as to what distance should be used. Based solely on the tail-off in the graph above, I would suggest that something between 4 and 30 metres would be appropriate. Another way to match (or unmatch) certain records would be using the flush bracket number, sometimes tagged as a ref in OSM. As mentioned above, flush bracket numbers are harder to obtain than the rest of the data, however.

Certainly there will need to be some careful testing and manual interrogation of the proposed changes – along with discussion with the OSM community – before any changes to the existing OSM data occur.

Apart from the merit of having the trig station data itself in OSM, it struck me that accurate co-ordinates for the stations visible from aerial imagery such as church spires, masts and water towers could be helpful in accurately determining the imagery's offset.

If the data is converted to a GPX file with lat/lon rather than British National Grid co-ordinates, the points can be viewed in JOSM. With care, the imagery can then be aligned to these points, bearing in mind of course that the imagery is often taken from an angle. The process would obviously be even more convenient if the data were imported directly into OSM, however.