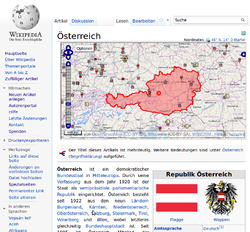 Screenshot of German Wikipedia: Article to Austria with vector-data to this article (red)

WIWOSM (Wikipedia where in OSM) is a project to show for a Wikipedia article geometric objects from OpenStreetMap. These objects have a matching wikipedia=* tag. The usage of WIWOSM will be primarily at maps inside Wikipedia (OSM-Gadget and WikiMiniAtlas).

A map exists with all the known geocoded Wikimedia Commons images: https://wiwosm.toolforge.org/osm-on-ol/commons-on-osm.php

Shows Austria on the map. The title-parameter in the URL is the Wikipedia article in the english Wikipedia, instead the OSM-relation for Austria use the tagging for German Wikipedia: wikipedia=de:Österreich. The existing Wikipedia-side interwiki language links from Wikipedia area indexed, so only a single extra tag is needed on the OpenStreetMap side, and this can be any one of the Wikipedia language articles.

Objects which can be referred to using WIWOSM no longer need to be "hardlinked". Previously, the only possible way to link a certain object was to refer to its OSM-ID. The problem with that is that the ID can change and thus break the link.

Other Example: An article about a miniature railway in Germany [1]. It uses points for railway stations, lines for the railway track and polygons for the rail yard.

Advantages for Wikipedia
The project will give users of Wikipedia a one-click, detailed view of complex geographical objects like rivers, streets and districts. It increases the potential of Wikipedia's geocoding, where an article gets only a point by describing complex lines and polygons. Geometry from OSM helps us to show maps at the right zoom level.
WIWOSM will connect Wikipedia content with the opportunities of a Geographic information system. So we can say e.g. how large an article object is or which articles are within the subject of another article.
Advantages for OpenStreetMap
This project shows that OpenStreetMap is more than a map; it's a database with a lot of use cases. Wikipedians will be encouraged to become OpenStreetMap editors and this will help to improve quality. The connection to Wikidata will also help to translate a lot of object labels into different languages.

OpenStreetMap has different representations for objects. This means a place can be represented by a node (a single point) or a multipolygon (an area). We want the most complex representation for this project. A single node brings us no additional information on the map compared to the usual geocoding in Wikipedia. On the other hand the place node for a city has a lot of additional data so it would be nice to connect it with Wikipedia.

Please have in mind that the scope of Wikipedia and OpenStreetMap differs at some points. So please do not add things to OSM that are out of project scope like historic stuff or ranges of specimen. We hope to solve this problem later with other projects, like http://en.wikipedia.org/wiki/Template:Attached_KML.

You should also respect that the system has limits. So if you want to tag all post boxes in the world for the article "Post Box", it will not work and you will see protest from OSM-community. Please discuses such ideas before. The system seems also not good for collecting articles in Wikipedia like Streets in Oslo. If you want to have maps in Wikipedia for this it's perhaps better to ask the Wikipedia Map workshop.

The project use the data of the mapnik-database on toolserver.org. This brings sometimes a larger replication delay: munin-stat

OSM has a lot of ways to use the wikipedia=* tag, and we try to support most of them. But we believe it would be best to always use the preferred method: wikipedia=lang:article.

Please make sure you don't use a name which gets redirected in Wikipedia!

There is support for the basic wikidata=* tag.
The other way around (link OSM-IDs from wikidata e.g. with P402) is a really bad idea, because OSM-IDs are more fragile.

WIWOSM uses wikidata to link all the different articles in many different wikis that describe the same thing.
The procedure is to look in the wikidata table 'wb_items_per_site' for the Wikidata-ID (that one beginning with Q...) and to get all linked articles by that number.
You can ask the API for a wikidata object by its ID like:

Thanks to many nice users we reduced some wrong wikipedia-tags (about 44000 Objects) to just ~4000. Awesome!
With the new Wikidata linking process, we find some other bugs, that were not addressed in the past.
The reasons for that could be:

You can have a look in the log and test some articles that could not be found. Maybe we can reduce the errors again. ;)

Check out the WIWOSM processing log in different formats here:

Have fun with fixing errors!

For objects with with a lot of points we use the PostGIS-function ST_SimplifyPreserveTopology() to reduce the data we send to the browser. We also reduce the decimal places. The simplify strategy at this moment is this:

If you have a good idea to optimize it, let us know, please.

We transfer the geometry to GeoJSON with a PostGIS function and put the files compressed on the server. The projection of the files is Google mercator.

We use the InterWikiLinks of Wikipedia to create hardlinks in the file system.
The filesystem structure is based on a hashing algorithm called FNV.
The process is as follows:

The advantage of this procedure is a fast access to the right geojson file, if you know language and article, without database queries or such stuff. Also we are able to support simpler update strategies by only updating one file without lookup on interwiki links.

On clientside we load the geometry in OpenLayers, WikiMiniAtlas or Leaflet (optional Vietnamese Wikipedia gadget). If the geometry is loaded and if it's not only a point, we zoom to it.

The old URL should be redirected at the moment - but it is not!

You can get the GeoJSON on Wikipedia file content of an article directly by calling with a lang and article parameter:

Returns GeoJSON or HTTP 404 Not Found if it does not exist.

If you want to explicit check if an WIWOSM object is there without fetching its content you can use the action=check parameter:

Returns 1 on existing objects or 0 otherwise.

If you explicitly want to regenerate a single WIWOSM-object before the nightly update process you can use action=purge but use with care! (disabled since 2014) 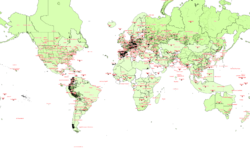 WIWOSM together with POIs from Wikipedia

Examples by the author

At the following list you can find some links to example maps:

Check the log to see if data has been renewed since you edit, and if there are no problems with your data. 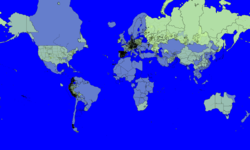 A lot of things are in the moment (April 2012) not in WIWOSM.
Help to bring more Wikipedia-Tags inside OSM. 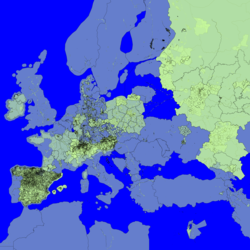