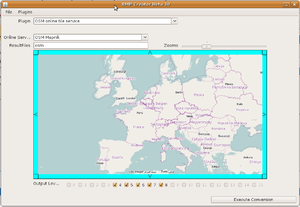 An old-ish model, a big player in its day. You can find these cheaply second hand, or maybe as gifts. Large black & white display plots your tracks and POI. Its big, gets a decent signal lock.

Memory is small, something like 500 POI or 1 kB of track points. Battery life is short, you definitely want to get some rechargeable AA. Data transfer is via a serial cable interface, so I had to buy a Serial-USB adapter cable as well. gpsbabel understands the Magellan format, but not completely — time stamps are often missing from transfers, so I need to post-process.

In summary, if you find this in an old drawer, go for it. Otherwise, buy something else.

I have a similar time stamp problem with gpsbabel and my old Magellan 315 — the problem turned out for the most part to be enabling debug output while downloading. Even without debug on the the dates are wrong (on my 315) typically somewhere in 1999, though the time seems OK.

Another item to watch when downloading is the Datum. The trackpoints downloaded from the Magellan unit are in the datum used when recording, and are not converted to WGS84 (the OSM standard). For this reason I have my unit set to use WGS84 as the primary datum and OSGB as the secondary datum.

Interface: None — no way to get data in and out.

Disadvantages:
Very poor battery life (4hrs), especially considering the LE unit requires you to use 3 AAA batteries. Also you can't turn the screen off while you are using the GPS, so the LCD is always draining power even if you aren't looking at it. Software is buggy, and changing the batteries in the wrong order will lead to the memory getting erased. Also if you are not on windows, the USB drive mode is very buggy at best. It basically is not Mac compatible. GPS reciever is not nearly as good as the one in Garmin Oregon 450. I don't think there is a way to load OSM maps.

Disadvantages:
The Memory, 3000 Points means 30 km in 10 m distance, which I use for mapping with bicycle. It starts to delete from the beginning without notification, so you have to watch the driven distance by yourself. Setting it to 50 m gives you about 200 km, which is acceptable for mapping by automobile. What I'm missing is the ability to set points every second or so. Be careful if the device shows "Empty Batteries": Two minutes later, when the device switches off, you will lose your track. So, switch off, change batteries and switch back again.

Advantages:
It can show maps, probably at some point in time OSM maps. For now, you can see the track you have driven on the map of the device and find streets that you want to map. It finds its position very fast, and does not use it while driving. Batteries (2×AA) last for about 20 hours.

The Magellan Triton Range looks like it has potential. Details seem to be lacking a bit at the moment, but, as an example, the Triton 2000 is supposed to have the following features: 2.7-inch colour touch screen, 2 megapixel camera with location tagging of photos, voice recorder allowing audio to be attached to waypoints, SD card, 3-axis electronic compass, barometer, and SiRFstarIII. That seems to be a pretty good mix of features, if it has some decent tracking options to go with them and generally good performance, this could rival the new Garmin GPSMAP 60Csx.