The table below contains 2 March 2010 information from ONEMI about what locales should be considered highest priority for OSM work. Places are ordered by priority, top priority first.

Values and Links in the table 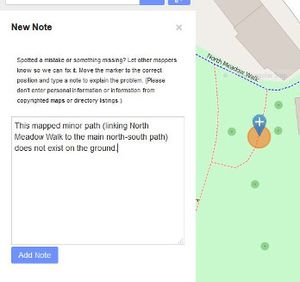 The note interface on the main webpage

Errors in the map can be reported easily by using notes. Notes contain a text message for other users and they can reply to it. Notes are also available for users without an account.

The FIXME key, fixme=*, may be added as data to OSM elements via Potlatch or JOSM. The value provided with the key should describe what problem should be investigated. Content tagged with FIXME can be found in JOSM via the search function, can be located using Query-to-map or can be viewed by value.

This provides a daily analysis of coastlines, targeting problem areas. The Chilean earthquake zone is shown in this view; a separate view for Robinson Crusoe Island.