Accuracy of a map is as important as completeness. This page discusses sources of error, and how correcting other peoples errors based on one source of data can be a problem.

OpenStreetMap is still in the process of building basic map coverage in many areas. The degree of accuracy that is reasonable depends on the existing data.

In areas where there is no coverage, even an inaccurate tracing of a road you know is there without GPS or other sources is an improvement.

There also more dense areas of our map tend to be those where many users have refined the data over time. in these areas you should probably be a bit more cautious when adding new data.

In general, edits improving accuracy are welcomed and edits making accuracy worse are problematic, so required edit accuracy depends on quality what is already mapped.

See also Question:What is the minimal expected accuracy of maps?

GPS is one of the major sources for OpenStreetMap. However, it does have several sorts of error.

When correcting or editing map data, you don't know if the GPS traces you have downloaded are particularly accurate. Even if you have gone out yourself, and they are your own logs, showing you starting and stopping in the same spot, if you go out next week, they may be several meters off. So correcting 'errors' (where someone else's GPS traces disagree with yours by under 20 m, unless it makes the layout of the road clearer) is generally a bad idea. However, if there are a dozen traces down a road, and the road is clearly off by several meters from the average, then moving it usually makes sense.

GPS has little systematic error when the receiver has a clear view of the sky in all directions. However, in some circumstances, repeatable errors can occur.

Consider a street running east-west, with a high building on either side. You are standing on the south side of the street, with a fairly narrow strip of sky visible, with a few satellites mostly in a line east-west. However, one satellite to the south, that is hidden by the building you are standing against, is visible as a reflection from the building on the other side of the street to the north. The apparent extra distance to this satellite due to the reflection will 'push' the GPS solution away from the reflected satellite - towards the building it's reflected from.

In this case, you will usually get a position that is off by some meters to the north, consistently.

The following image of a small housing estate in Markinch contains many GPS tracks, and several inaccuracies. 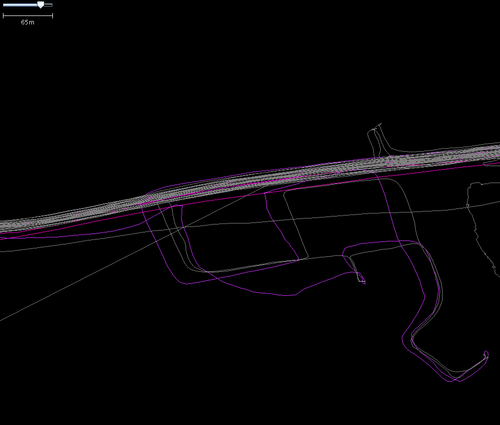 Firstly, look at the many white lines towards the top of the image. This is an east-west road, with a spacing between carriageways of around 5 m (meters). These are traces from a Navigo 3100 GPS. Over many journeys over some months with one GPS, the overall error becomes clear. The white lines should be in two strips around a meter wide, spaced by 4 m or so.

However, they are nothing like this, with the extreme traces separated by around 18 m! This indicates the day-day accuracy of the GPS is perhaps ±7 m or so.

The correlation of tracks taken in a much shorter period can be misleadingly higher. Look at the lower tracings - this is a journey around a small housing estate. Compare where two white tracks run against each other - each trace was taken within around 5 minutes, and the systematic error between the two tracks is under a meter. If this was retraced the next week, this track could be offset by as much as 15 m.

It is not usually worthwhile correcting errors of much under this, other than in special circumstances.

The pink track is a different case. This was a different GPS, and shows errors typical of a GPS with poor signal (however as it was right next to the other GPS - it is simply performing poorly). The issues shown on the pink track are especially vivid when turning corners. Sometimes it does not notice the corner immediately, and carries on in more or less the same direction for some time, before correcting itself.

Georectification is the art of taking multiple datasources, often photos from the air or satellite, and combining them into one consistent image of the ground. This is often very good, especially in built-up areas, where matching of the edges is easy, and there are probably already surveyed reference points. In many regions aerial imagery can be considered as nearly completely accurate. Using them is often both easier to use and more accurate than repeated GPS measurements[1]. For example in Poland Geoportal aerial imagery is generally considered as a gold standard for mapping.

In other cases, or due to human error, apparently high quality imagery may be considerably more inaccurate than the resolution would lead you to believe.

Take a look at an image below. In reality, the red lines are straight. 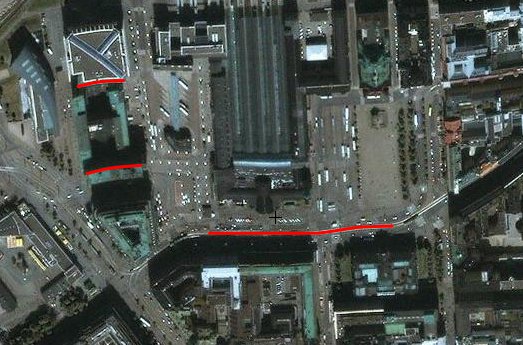 There are a number of possible reasons for this error. For example - if the camera is not directly overhead, it requires knowledge of the relative heights all parts of the photo to convert the image so that it appeared to be overhead.

If the model of the elevations is incorrect, then there are distortions introduced.

Checking against other datasources when tracing is always a good idea if possible. For example - already existing roads or features from GPS. Other sources of imagery or maps. 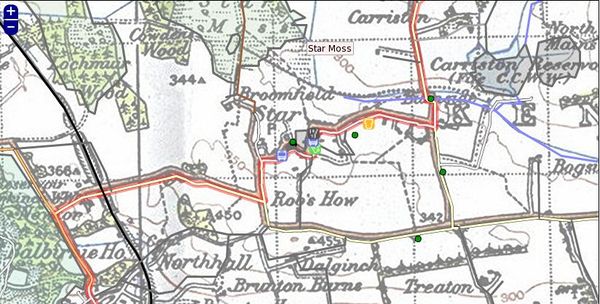 The accuracy varies across the map, with general shapes being quite accurate, but distortions evident, especially where there is poor line of sight, which made triangulation difficult.

Old maps should be used with caution. They are likely to have inconsistent errors across the whole map, as well to more obvious problems - the above map also has some nearby hospitals for tuberculosis, many of which may have closed.

Perhaps more important than absolute accuracy is how roads and other features connect. Do two roads intersect at the same point (a crossroads) or is the intersection offset? This detail may only be a matter of a few metres, but can be the difference between driving instructions that might say at the crossroads go straight ahead or at the junction turn left and then after 10 metres, turn right.

When tracing roads — particularly winding, rural ones — you should add enough points to make each curve look like a curve. Of course, this is entirely subjective, as curves made entirely of lines will only ever approximate a "true" curve (which has an infinite number of nodes), and will always look like a series of lines when zoomed in past a certain point no matter how many nodes there are. Any "rule of thumb" as to node spacing and quantity would be arbitrary and capricious. To generalize, though, sharp curves (those having a small radius) require many, closely-spaced nodes, while broad, long-radius curves can consist of fewer nodes having more distance between them. Without a hard-and-fast rule, it is best said to simply use good judgement and strive to seek a balance: on one hand, remember that you are drawing a map, not just a routing diagram; on the other hand, don't try to seek perfection by adding more and more nodes past the point of diminishing returns, keeping in mind that each additional node requires that more data be stored and transferred.

You may need to add nodes in curves so that physically separated lanes not connecting the same directions will be correctly will not intersect and will be still separated by a reasonable distance. The maximum offset between the straight segment and the actual road should then avoid exceeding about 4-5 meters (half the total width of typical roads is generally enough) or 2-3 meters in urbanized areas (allowing also correct placement of pedestrian crossings, signals, and equipements on the side footways such as bus stations, recycling bins, postal boxes. If the highway is open to buses or trucks, the maximum angular deviation between segments of curves should be about 20 degrees (a full circle would be drawn with about 16 nodes, and typical corners in streets would require about 3-4 nodes for the small segments connecting straight lines). Of course you should avoid passing across buildings and barriers (including trees or parking lots) beside the roads/streets. On very large roundabouts, or on very long curves, you may place additional nodes so segments on the curve will not exceed about 30 meters. This local precision will allow typical GPS navigation systems to know exactly on which way you are (avoiding false indications near junctions or with parallel highways separated by barriers, or not giving you any indication if it thinks that you are in the middle of a field or private property). On very rural areas or in forests with just tracks, curves are only estimated and may be less precise (GPS accuracy is low within forest, and aerial imagery is difficult to interpret: you may need to use official land surveys or cadastre if it's available as open data and you don't have enough GPS traces to average them).

Naming is not always unambiguous and there are many sources of confusion - from different governmental entities naming the features differently, to inaccurate signposting.

OpenStreetMap tries to map reality 'on the ground'. Though there may be controversy over the legal status of the territory, with governments and people calling a location different things, we try to as far as possible map on-the-ground reality. See Disputes#On the Ground Rule

What do the street signs say? What do the local inhabitants call the place?