The project of the week is a fun way to get out and map something that you might not map otherwise. This week we'll map tennis courts before we run home to watch the matches at Wimbledon.

First job: Make sure all your local tennis courts are on the map!

Tennis courts are fairly distinctive in bing imagery, and can be mapped in remote far off places. You can often spot them in and around parks and schools. In some cases you may be unsure of tennis versus basketball courts etc, in which case you should maybe leave out the sport=tennis tag, but often you can tell fairly well that it is a tennis court.

Adding tennis courts in the U.S. here's the game:

You may end up finding a lot of work to do improving more important details of parks and schools, e.g. converting them from nodes to areas. Many parks and schools in the U.S. are still just mapped as single nodes (imported from GNIS)

Harry Wood created a tennis edit tracker to see who was mapping tennis courts and how many: 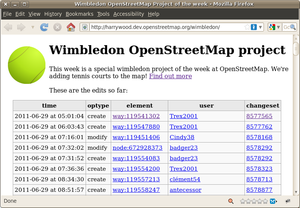 (The earliest version of harry's tracker system, later refined for baseball then schools!). It's no longer updating with new edits. Congratulations all of those who made it onto the list by participating in this project of the week! Place this text on your wiki user page: {{User Wimbledon champion|year=2011}} ...to give yourself an award!

If you missed out on the action you can still help to map tennis courts! All contributions appear on the map and form part of our open license map dataset which is shared with the world for free. Alternatively why not check out the latest project of the week page and get in on that action!

For a tennis stadium (partially) surrounded by stands for observers

For an indoor tennis facility consider